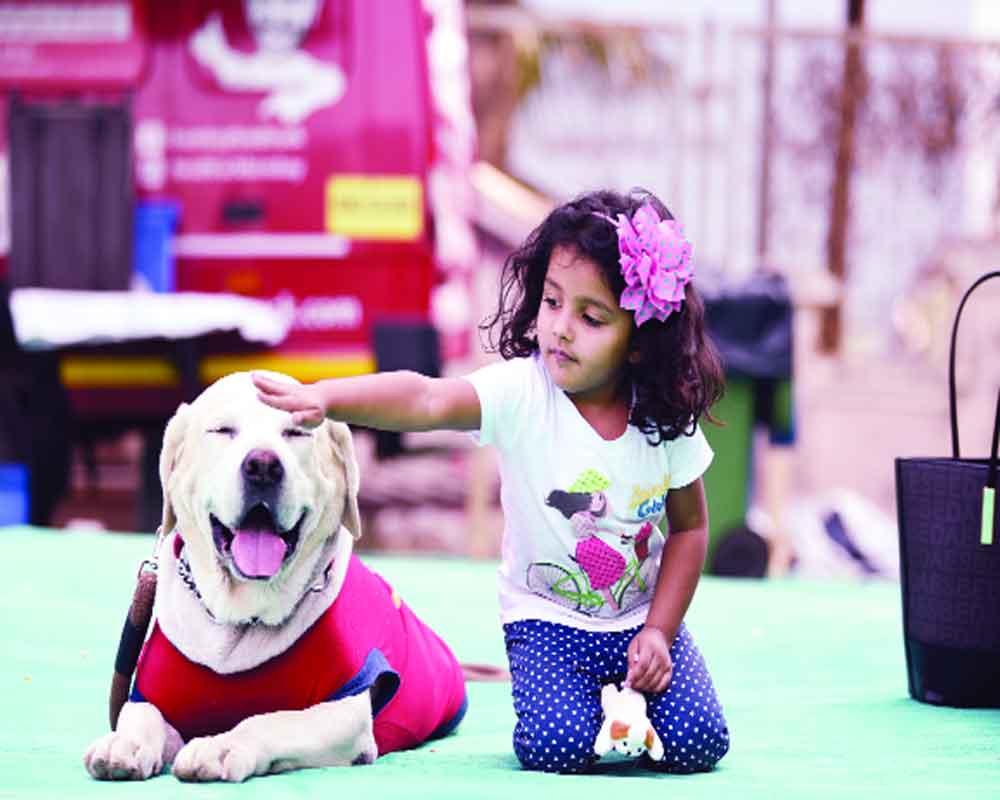 Akshay Gupta, founder of Pet Fed, says that the festival has a lot on offer for strays as well. By Ayushi Sharma

Most people insist that their pets are like their children or even buddies. So how often do you take your pet out for amusement and dedicate a day only to them? Pet Fed allows you to give your best bud the perfect day out which is filled with fun, games and activities ranging from fashion shows, security dog acrobatics and temptation alley to curated arenas like off-leash play area, cat zone, alongside music, food and pet care stalls.

The fest was started in 2014 and is now in its sixth edition. Akshay Gupta, founder of Pet Fed, shares that in India, there is an event of every kind of human interest be it comics, arts, fashion, music or food. These mean that we have a common platform where we can meet like-minded people and have fun. But despite the fact that there are legions of animal lovers, there was nothing for them or their pets. That is what set him thinking and from it emerged this idea. The festival is not just a social gathering but also a source of infotainment which offers a flurry of activities and competitions for pets and their parents.

By its very name, the fest is dedicated to the ones at home which means that we are neglecting the stray animals. Akshay clarifies that the organisers are doing a lot of things for stray animals as well. For example, they have about nine or 10 NGOs who get free space to put up a stall at the festival. They run their adoption camps, where people can adopt the stray dogs and cats. They also run camps to create awareness about being more humane towards animals. “Plus, if you come to the event with an adopted indie breed or you have rescued a particular animal, your entry is free. When adopting a pet, one takes him for vaccinations. The veterinary doctor always mentions the name of the breed on the card along with details of whether it was rescued or adopted. So we ask people to send us that screenshot and give them entry on that basis,” says he.

Akshay shares that they always try to work with all the reputated NGOs in the city like Friendicos and People for Animals. And if some smaller NGO wants to take part, they have to go through a rigorous process of background checks to know the years of experience in the industry and that their paperwork is complete. It is only after all this has been verified that stalls are allotted to them. “We also have Federation of Indian Animals Protection Organisation (FIAPO) on board. It’s India’s most comprehensive NGO network of animal rights, workers, activists, supporters, advocates, campaigners for the rights of animals in the country,” says he.

Akshay feels that people usually think dogs are nothing more than furry creatures to play with but at the Pet Fed they wanted to demonstrate that they are beyond that. So, for the very first time, the fest has collaborated with Delhi Police Crime Branch for a 30-minute demonstration about the manner in which the dogs should perform in a situation of unrest. There will be 12 serving dogs and 20 police officers.

He says, “People complain that we are neglecting the cats and that the fest is centred around dogs only. This time we have partnered with the world’s largest body for cats — World Cat Federation. We have got on board international cats behaviouralist from Russia and Italy. They’ll be conducting a full cat show, where these professionals will be conducting workshops, seminars and they’ll be judging the cats on the basis of their breed and upbringing so that people can understand these feline creatures better. This will be done in a 10,000 sq feet cat proof area, where 200 of them would participate.”

Apart from dogs and cats, people do get rabbits, hamsters and guinea pigs to the festival. That’s always a fun sight, shares the founder. “These creatures like to be in confined spaces. They are not very interactive in themselves so we don’t have any activities for them. They just like human companionship and like being in their own space. Forcing them to do any activity would be cruel to them. They can go for basic things like, grooming and health care check ups. We have an ambulance, too, on standby in case any emergency comes up,” says he.

One of the precautions, Akshay says they keep in mind, which visitors also find very cool, is that, “Every pet has to go through a small behavior check. There are professionals who check the temperament of the pet. For instance, if the dog is very aggressive, a red flag with a cool quote will be given. So that the rest of people can know that this pet is a little aggressive, ‘I should be cautious while going near him’. If it’s a friendly pet, we give a green tag. And if it’s a moderate pet, they get a yellow one. It’s like a traffic signal. Red-Yellow-Green. So if you see red, you stop, if you see green you can go. Even if somebody wants to adopt a pet, people know this beforehand that this pet friendly or not.”

But going beyond the festival, there is always the question about the fetish behind buying accessories for pets. So what are the current trends in the same? Akshay tells us about bag packs with airholes and glass covering the top which are not just trendy but have utility as well. “You can keep your cat and small animals in your bagpacks because they like to be in confined spaces. That’s a pleasant environment for them. They can see through the glass and you can carry them wherever you go,” says he and adds, “A lot of fashion elements come in — jackets, collars, pants for the dogs. A lot of jewel studded collars are in trend right now. People are indulging in Swarovski collars because they are fancy and give you a feel that you have bought something special for your dog.”

It is time that you took your best bud on a date.