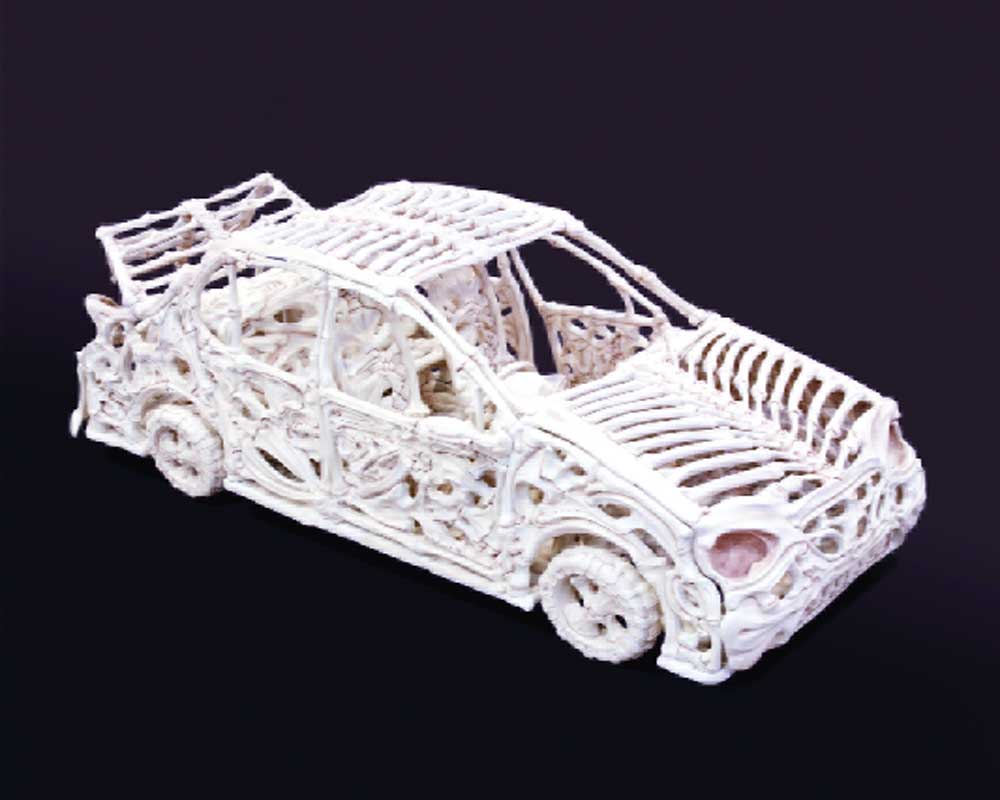 There are 90 installations that speak volumes, make us think and raise questions about the reality we live in today at the South East Asian Contemporary Art Auction by AstaGuru. Of course,  Tushar Sethi, CEO, points out to the four evocative ones  by Jitish Kallat, Ravinder Reddy, Valay Shende and Krishnaraj Chonnat. The best of the lot is Kallat’s playfully artistic automobile created in 2007, a skeletal wonder made out of resin, paint, steel and brass.

Look at it any way, the oeuvre of Jitish Kallat is always expansive and cutting edge. His uniquely layered autobiographical works spring from classical themes, the history of art, birth and death and the narrative of the human struggle for survival. The car is caught between its past and its future.

Fashioned out of the skeletal forms of the human body, Collidonthus is the wrecked carcass of a life-sized automobile. Resin, mimics of bones and teeth make up the body of the car. Figuratively, the skeletal body of the automobile evokes the grim reality of India’s chaotic and over-crowded cities. The pandemonium of the urban life, where transport, animals and humans collide, is not sustainable. In fact, Collindonthus, a title referenced from pre-historic dinosaurs, could be exhibited in a museum in the future.

The second installation is a delightfully decorated woman’s braid by Ravinder Reddy, who is known for his heads. The braid makes a statement of sheer femininity, referencing lifestyle and a cultural symbolism to sacred art in many ways. Braiding women’s hair in India, especially in the South, is a rich tradition. Reddy gives us a braid decked with plastic flowers and creates a rich analogy of everyday idioms. He takes us back to the time when growing hair was natural and looking after it was a ritual that bespoke of a discipline, unlike the extensions and deceptive wigs in today’s world. What’s endearing is the plait’s position on the wooden flat pedestal as it speaks to us about many legends of yore and a rare insight into a world where short hairstyles are considered less cumbersome.

Created in 2006, Krishnaraj Chonnat’s Private Sky is yet another beauty. Made of steel, fibreglass, fake fur and plastic, the artist aims to question people’s perceptions of landscape, urbanisation, progress, waste disposal and smell. He explains how and why he uses these themes. “Everything’s so well constructed and simulated that you don’t know if you have to trust your instincts or experience and believe what you’re seeing,” he says. He questions society’s tendency to perceive technological development as progress. His artwork investigates the impact that changes in a landscape have on the native population. “I was very much interested in working with the idea of housing. Personally, I’ve been very drawn to this because my own experience of having lived in and moved out of the city to this beautiful place. Over the years, all these lands around were denotified and all this construction suddenly happened. New roads were laid right through living colonies. Everything was thrown up. Private Sky actually happened somewhere around that same time of realisation.”

In the artwork, a wooden house, which is a replica of houses found in southern California, sits in the branches of a dead tree. A huge mosquito squats at the foot of the tree and a moon made of faux fur hangs overhead. The design for the house was inspired by a brochure describing a housing colony (residential development) that was being built on what was once a mosquito-infested lake.

In the first glance, in Valay Shende’s artwork, an upside down horse, whose legs flung in the air, seems to be at odds with the nature. However, the horse is a victim of the time, lifestyles, atrocities and man’s insensitivity towards animals. The steel discs make his anatomy shine but halt us in our understanding of it. Shende here deals with colonialism in Mumbai and his city in different realms. For Shende, art is a language and like most languages, he likes his art to be clear and precise so that the meaning is not lost during communication. “I don’t like confusion in art. So I always make a clear statement. I want my artworks to freeze the current times so that the coming generations can look back and study our time period through my art,” said Shende. That is partly the reason he used metallic elements to construct his sculptures, which are not only durable but also represent the current times. Their shiny element attracts the eyes easily, he pointed out.