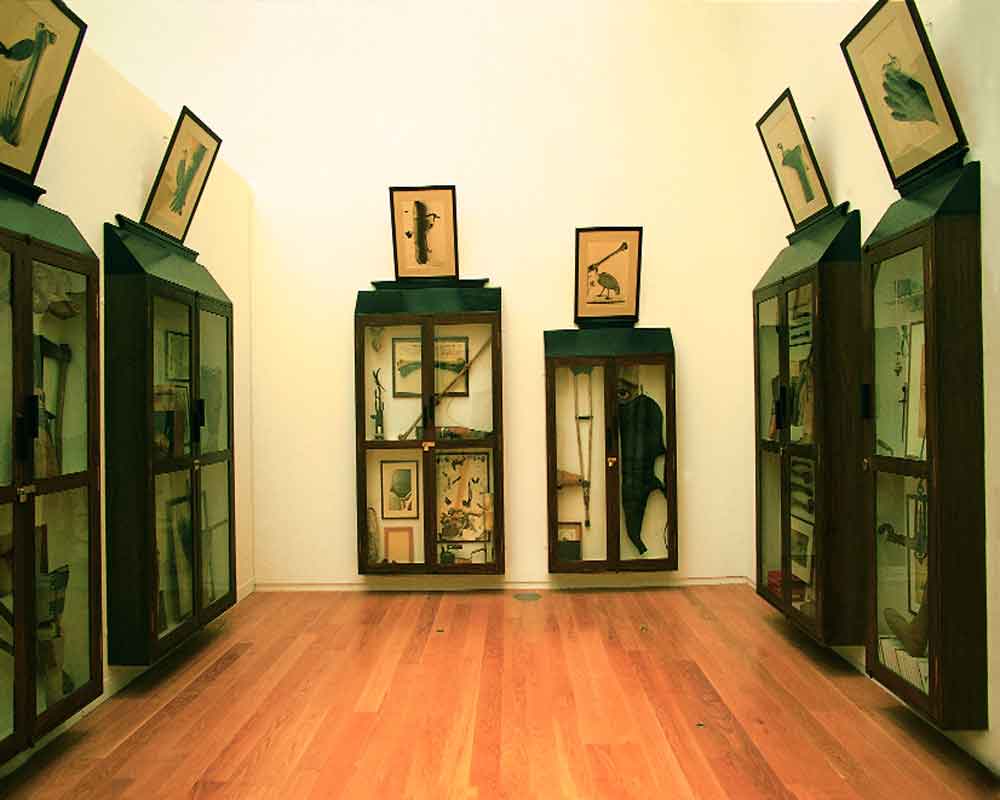 The 58th Venice Biennale will critically engage with the many facets of Gandhi, including his philosophical ideas and their place in today’s complex world, in which violence and intolerance are still prevalent. By Uma Nair

A monk once said, keeping in mind Mahatma Gandhi’s philosophy of nonviolent resistance, “Peace cannot be built on exclusivism, absolutism and intolerance. But neither can it be built on vague liberal slogans and pious programmes gestated in the smoke of confabulation. There can be no peace on earth without the kind of inner change that brings a man back to his right mind.”

At the Indian pavilion in its second-ever participation at 58th Venice Biennale, the group presentation entitled Our Time for a Future Caring, will critically engage with the many facets of Gandhi, considering his philosophical ideas and their place in today’s complex world, in which violence and intolerance are still prevalent.

From the NGMA collection, Zameen 1955-56 is at best MF Husain’s magnum opus — it is a summation of the first decade of his work as an artist. It is an experiment which still has relevance and validity, though it has compositional characteristics of Pablo Picasso whom Husain admired.

“In the format of a long continuous frieze, it reads like a mural with a horizontal orientation and continuity, which also makes it revolutionary and reminds us of the long friezes in rock cut caves and in temple architecture, besides the painted murals in Ajanta caves,” says DG Adwaita Gadanayak. “It evolves as a set of compartments, with an ensemble of forms, symbols, emblem, pictographs of India, placed in hierarchies, occupying spaces prominently in the centre or in the margins.”

Gandhi or “Bapu” as he was lovingly called, plays a prominent role in many of Atul Dodiya’s works. Atul has worked on Gandhi as An Artist of Non-Violence, in 1999 when he attempted to tell the story through a lost biography, painting the most mundane details of the life of the legend, such as receipts and pages from his diary.

Gandhi’s Ideas and connections constantly flow through Dodiya’s mind. The artist also created cabinets in his 2011 solo exhibition at Chemould Prescott Road which gave viewers an insight into his complex practice. Dodiya used the motif of the cabinet in a powerful 2004 work, Broken Branches where Dodiya created colonial style vitrines that served as “emblem of vigil against indifference and amnesia,” encasing signs of pain and suffering such as crutches and prosthetic legs to highlight the high human cost of political history. In the 2011 cabinets, motifs from earlier works, art historical texts and images filled glass vitrines created a sense of excitement about what the artist would produce next. This work will emulsify the idea of a contemporary format and Dodiya’s brilliance at connecting memory and history.

Shakuntala Kulkarni had exhibited a celebrated body of work, Of Bodies, Armor, and Cages in 2012 at Chemould Prescott Road, the Kiran Nadar Museum of Art, the MMKA in the Netherlands and Art Unlimited at Art Basel. Kulkarni explored the idea of women in public spaces and created sculptural armors out of cane that not only protected the female protagonist but also elevated her to a goddess-like stature. However, there is a tension between the notion of being protected and being trapped. In a series of performance documented in photographs, the protagonist stands in different historically important locations in Bombay that are in danger of being destroyed, using her armor, will protect the city from cultural invasion. Kulkarni’s Photo Performance will be a stunning spectacle of sorts for visitors to the Biennale.

GR Iranna’s Naavu, a mixed media work attract attention for the subject of the paduka — the sandals worn by the saadhaka, the one who serves as he is a practitioner of non violence. “I used different kinds of padukas to show different people,” says Iranna in an exclusive to Vivacity. “Gandhi was about forging togetherness and I use that concept of we are together because in Kannada Naavu means ‘we are together.’ My work looks at the bonding of so many different kinds of people but we share a belief of wanting to live as one in an understanding of shared values.”

Ashim Purkayastha’s stamps of Farmers completes a scenario of the shared distinctions in values and races and the credo of sustenance in simplicity. Arun Goel, Secretary Ministry of Culture sums it up, “The curated presentation Our Time for Future Caring is a call for understanding of Gandhiji’s ideas for a solution to modern day complexities. The Pavilion exhibition weaves together contemporary artworks by eminent artists, emphasising historical moments concerning Gandhiji or invoking critical thinking in an imaginary staged encounters.”

A significant new partnership between the public and private sectors in India has enabled the India Pavilion in 2019. It has been spearheaded by the India Ministry of Culture and co-organised with the Confederation of Indian Industry (CII). It is curated by the KNMA, the Pavilion’s Principal Partner; the Director General of the NGMA is the Commissioner of the project.

(The biennale is opening on May 7.)