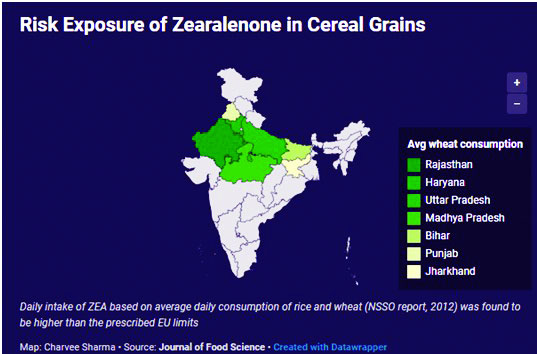 Researchers from the Indian Institute of Toxicology Research (IITR) have detected the presence of a toxin—‘zearalenone' in 84 per cent of the cereals tested in Uttar Pradesh, says Charvee Sharma

Zearalenone is a toxin produced by soil fungi which behaves like an endocrine disruptor in humans. This means that this fungus can possibly lead to hormonal imbalances, birth defects and other developmental disorders. Various studies have also indicated signs of early puberty in girls on exposure to high intake of this toxin.

The findings of this research published in the ‘Journal of Food Science’ present a quantitative assessment of zearalenone contamination in cereals based on their daily consumption values. The experiment was carried on 117 unbranded samples of corn, wheat, rice and oats in Uttar Pradesh. After analysing the average cereal consumed, the daily intake of zearalenone in rice was found to be 17 times higher than the prescribed limit by the European Food Safety Authority Standards (EFSA). In case of wheat samples, the daily intake of zearalenone was seven times higher than EFSA limits.

In India, regulatory mechanisms are in place to control the contamination of fungal toxins which have previously lead to disease outbreaks in humans and animals, including aflatoxins which affects nuts, deoxynivalenol and ergot, which infests cereal grains. Last year, 56 cows were found dead after grazing on post harvest cuttings of maize, which was later found to be contaminated by aflatoxins in the Guntur district of Andhra Pradesh.

Being a tropical country, the warm and humid climate of India inherently provides favourable conditions for mould infection to develop in food crops. Hot weather also compliments the nature of zearalenone, which can endure very high temperatures. Zearalenone starts to accumulate as storage protein in the cereal grains during the storing, milling and other high temperature processing.

The important fact to note about zearalenone is that the spores of this fungus are permeating, which makes all cereal grain vulnerable to invasion and infestation. Geographical factors and environmental conditions such as erratic rain and high moisture makes fungal infection thrive in standing crops as well as stored food grains in warehouses, after harvest. “In the absence of any regulatory limits, the Indian population is at a greater risk of zearalenone exposure by consuming highly contaminated cereals,” says Mukul Das, a senior toxicologist who designed the study.  When asked about the presence of zearalenone in food grain, consumers in local market of Delhi said that they were now ‘simply apprehensive about the food they are consuming’.

While the research was conducted on cereal samples in Uttar Pradesh, the presence of this toxic fungus has indicated a potential risk for the Indian population. However, there is a need of further examination and quantitative analysis at the national level.

Considering the fact that about 80 per cent of the Indian population consumes wheat and rice as their staple food, the exposure risk assessment of zearalenone serves as an important revelation for ensuring food safety. This also calls for immediate regulatory framework by the FSSAI to prescribe limits for zearalenone.

(The author is an engineer.)