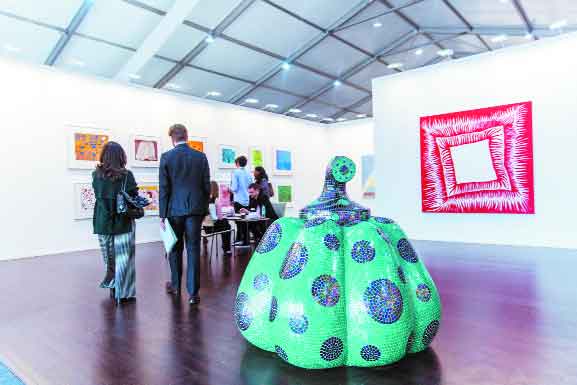 Through a line-up of installations, conversations, and artworks, India Art Fair 2019 is set to present 75 exhibitors from 24 Indian and international cities. By Team Viva

Art galleries are everywhere, but there’s a lot more beyond that world. The India Art Fair has become a pilgrimage of sorts for art lovers in the country as well as abroad offering insights into cultural landscapes and initiating dialogues on various states and cities.

This year the fair aims to discover modern and contemporary art from South Asia, presenting 75 exhibitors from 24 Indian and international cities.

There will be many artists showcasing their respective presentations under the section. Self-taught artist Baaraan Ijlal will present her sound installation titled, Change Room. Artist Manisha Gera Baswani will be exhibiting her series titled, Postcards from Home, which details accounts from those affected by Partition. Among other artists, there will be Galleryske, which will create a pop-up concept store offering artist-designed products. There will be works by sculptors Shanthamani Muddaiah and Shalina Vichitra, alongside an immersive reflection from architect Pinakin Patel. Artist Madhusudhanan will be presenting a few of his video works.

Leading cultural organisations and foundations from the South Asia region will include the Foundation for Indian Contemporary Art (FICA), Kiran Nadar Museum of Art (KNMA), Museum of Art and Photography (MAP), and the Bengal Foundation of Dhaka.

There will also be Inlaks Shivdasani Foundation, which will show works by recipients of the Inlaks Fine Art Awards throughout the fair. These will be joined by New Delhi-based international bodies — Italian Embassy Cultural Centre and Korean Cultural Centre.

The fair programme will reflect upon the changing face of the global art community with Forum, a platform encouraging opportunities aimed at the younger generation.

London-based writer, researcher and curator, Sitara Chowfla, who will be this year’s guest curator, will work on critical experimentation and the work of artists, curators, institutions, critics and collectors across the globe. The platform will include performances and talks by international artists, extending into the main gallery halls with Forum Projects, including When All Roads Are One by New York-based artist and designer Ghiora Aharoni.

A new initiative IAF Parallel will see collateral events programmed by galleries, museums and arts spaces across the city.

The main highlights of the section include artist Bharti Kher’s solo exhibition at Bikaner House; an exhibition-launch dedicated to artist Upendra Maharathi at the NGMA; artist Arpita Singh’s retrospective at KNMA; and a special exhibition by Foundation for Indian Contemporary Art (FICA) at the IGNCA.

The first-time participating international galleries include neugerriemschneider from Berlin, Germany, and Sokyo Gallery from Kyoto, Japan.

(The fair will begin on January 31 and go on till February 3.)