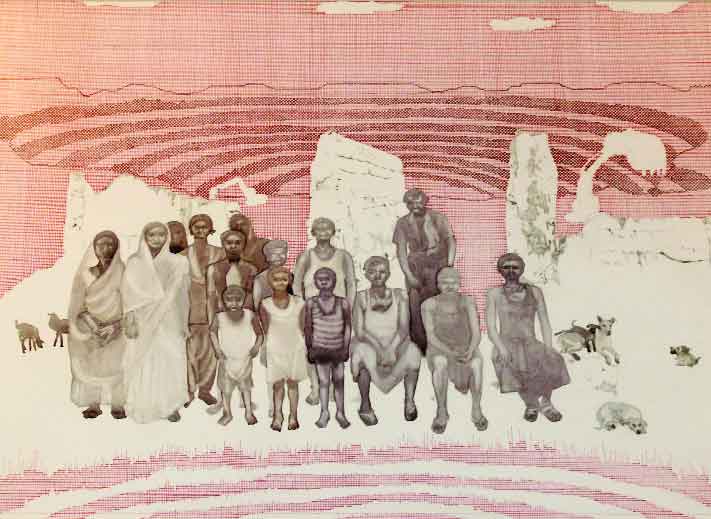 The beauty of artworks by Purvai Rai and Suman Chandra lies in the freedom that they give to their designs. They explore the possibilities of using jute and cotton threads and cement as modern media, says Uma Nair

Understanding the phenomenon of Indian contemporary art is no more confined to the experienced or middle-aged artists only. Now the young ones are equally participating in analysing, experimenting, innovating and engaging culturally with the Indian contemporary movement as they find it very interesting.

Art Alive’s debut of three young artists brought forth a number of experiences and evocations. The most engaging of all are Purvai Rai’s explorations in jute and cotton that create an island of textural terrains in her journey, which could be compared to a pliable plane. A student of design, her interest in exploring the relationship between textiles and architecture, and examining its nitty-gritty intonations results in a series of works that become integral to architectural design.

It is the smallest room at the far end of the gallery, where she explores the possibilities of using jute and cotton threads as a modernist medium.

“My works are born from my interest in the chakra,” she states with a charming robust innocence. But one look and you know that it is also deeply rooted in a lucidly sophisticated and ancient design  tradition. Purvai creates a series of abstractions that hinge on textile-related concerns — colour, texture, pattern, surface qualities and other aspects of ‘textile language’, as simple as knotting.

Instantly you get to know that she has studied the material qualities of yarns, as well as different ways of working with them. By combining yarns and techniques she creates multi-faceted pieces that are rich in the texture of the jute threads she places on paper. Using a technique — floating weft she integrates additional threads as free lines. She then intensifies the impact by drawing  these threads into the structure of her pictorial designs.

Initially, you are drawn into the striking newness of conception with regard to use of colour and compositional elements. The meditative mooring finds its own distinctive language, emphasising haptic as well as tactile qualities.

The beauty of her work lies in the freedom that she gives to her ‘design dictates’. She lets the jute threads be articulate and individual so that they can find a form for themselves and are looked upon as individual entities. This is the most important reason for the existence of her pictorial weavings.

Purvai, the younger daughter of Raghu Rai, develops a language of abstraction that expresses emotions without the use of words. Her choice of colours and patterns are simple and graceful, yet born out of an Indian aesthetic that dwells deep into primordial principles. Her ‘memory graph’s’ are amongst her finest suite. They seem to be far more meditative as they provide a unique longevity and depth of experience which is rarely seen in young, emerging artists.

Suman Chandra creates dialogues out of his rumination of coal miners and their existence. He has a large watercolour series that has light yet subtle handling. He manifests a multi-hued palette demonstrating his understanding of the techniques. He does that through the multiple emotive and performative possibilities of colour and contour in the graph of tonalities. He creates semi-abstract images, which are tranquil but are composed of finely-drawn lines and planar divisions that link phases of quiet and latent energy. It resembles a landscape of various moods that lie within the surcae. Yet the understanding of the place and pictorial quality of his imagery could be described as intricate as the beauty of a butterfly’s wing.

The movement and softness generated by the lines recall the futurist aesthetic of “universal dynamism.” Although ideologically, he is drawing our attention towards the plight of a labour intensive pastorale and various dimensions of abject desolation and despair. While his watercolours are deeply driven by a certain solitary solace, it is his sculpture that attracts an inner resonance in terms of the poetics of intensity and allegory. This dark raven toned relief work of coal, dust, mud, cement and glue is about the intricate human haunts that visit civilisations past and present.

The finesse and phrasing of narratives can be assumed as a matrix of unspoken dialogues, or it can be read as an abstraction, implies a kind of arena, a central narrator speaking to a larger audience.

Striking in its examination of monochromatic interaction, the coal version reveals the multiple trajectories of Suman’s  object-oriented approach to the image, which is born out of a keen observation of the natural world of coal miners.