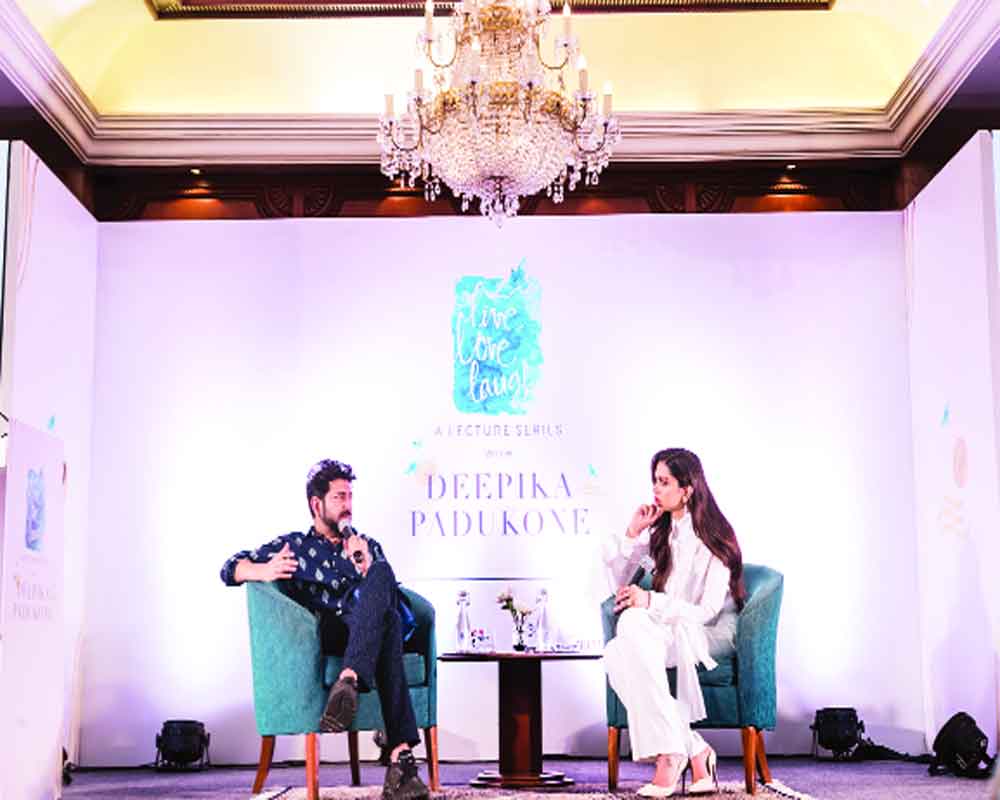 At the Lecture Series With Deepika for the first edition of the Live, Love, Laugh foundation, Dr Siddhartha Mukherjee speaks about how we need to address the stigma around mental health the same way we dealt with the taboo around cancer in the 1950s

There has been a long standing debate on mental health in our country and actor Deepika Padukone, who has been active in talking about her battle with depression at the peak of her career, believes that there is still a long road ahead in terms of creating more awareness on the issue. Though she is happy to see that a conversation on the topic has opened up. The 33-year-old actor, who was in the capital for the first edition of The Live, Love, Laugh foundation — A Lecture Series With Deepika, opened up about her struggles.

The maiden lecture was delivered by Pulitzer Prize-winning author and Padma Shri Dr Siddhartha Mukherjee. In his talk, Dr Mukherjee spoke about how cancer in the 50s, was a stigmatised illness as patients faced potent forces of discrimination, fear and neglect. “When anyone was diagnosed with cancer, the blame for the disease was carried by the person themselves. Patients with cancer were pushed to the back of the hospital. Mental health issues carry a similar stigma,” he said.

His talk was centered around three forces, which he felt were needed to be addressed. The first force is political — for mental health to be recognised as a public health crisis, a national issue, there is a need to create national institutes for mental health. Stakeholders in the political domain must come together and work towards this common goal. The second force is social — this will entail advocacy and awareness around destigmatising mental health. The idea of ‘you bring the disease to yourself’ must be erased. The idea is to remould another disease with the learnings around destigmatising cancer. The third and final set of forces is biological, genetic or pharmaceutical, to an extent. This entails making efforts and carrying out research to understand the molecular mechanism so that people would not be victimised.

He shared an anecdote, “In 1950, Fanny Rosenau, a journalist, who was suffering from breast cancer, called up the New York Times to place an advertisement to create a social support group for women with breast cancer. One of the editors said that we can’t publish the word ‘breast cancer’. How about we say social support group of women with chest diseases? So this is death by euphemism because it creates a culture where you become the victim of the disease. In the 50s, if you spoke to oncologists, they would remember the times when patients with cancer were pushed to the back of the hospital. Once a woman with ovarian cancer asked the medical establishments that ‘will you throw me out if I don’t get better?’ because all you care about is the success of your therapy and not the empathy that you deliver to patients.”

He added, “Today, biological insights are being extended to mental health. For instance, there are 100 gene variances that contribute to schizophrenia yet there is a clear environmental aspect to this. The same is true for other mental illnesses as well. The challenge for the next generation thus lies in understanding these two components. I call this the Yin/Yang puzzle. While the Yin – the genetic – part is solved, the Yang – or the environmental milieu – still needs to be addressed.”

Dr Mukherjee noted that progress was being made and that there is more conversation, advocacy and philanthropy around mental health.

“There’s not much stigma as there used to be four years ago. But we certainly have a long way to go in terms of creating more awareness. I think that’s where we need to keep the conversation alive,” Deepika, who looked stunning in a pristine white ensemble paired with shimmery danglers and minimal make-up, said.

The Piku star described her journey and said, “It’s been an incredible journey since we developed our foundation. I think media has had a huge role in opening up the conversation in various ways, whether through interviews, write-ups or articles but we certainly have a long way to go and that’s why we have the lecture series today,” she said and added, “Four years ago, we wouldn’t even talk to our families about how we felt emotionally. Four years on, we, as a nation, have come a long way in bringing that conversation to the fore. This lecture series is an initiative to learn from some of the greatest minds of the 21st century. It is important for people, who are passionate about mental health, to talk about their journey. Illnesses such as AIDS and cancer have successfully managed to break through the stigma and I believe there is a lot for us to learn from those examples.”

The event also featured a video message by Dr Harsh Vardhan, Union Minister for Health and Family Welfare, Government of India, who said, “According to WHO, health is defined as a state of physical, mental, social and psychological well-being of an individual. It is not merely the absence of disease and infirmity. The definition itself makes it amply clear that mental health is an important component of the overall health spectrum. I wish to congratulate the foundation and Deepika Padukone, of course, for flagging this issue before the Indian society.”

Dr Indu Bhushan, CEO of Ayushman Bharat pointed that the country’s national health protection scheme covers all secondary and tertiary health states, including a large number of mental health condition. Anyone with those conditions is provided free treatment. It also covers the poverty-stricken population of the country, which is 40 per cent. This is the segment where mental health issues go unnoticed and the scheme is going to help those who may have not received treatment for mental health so far.