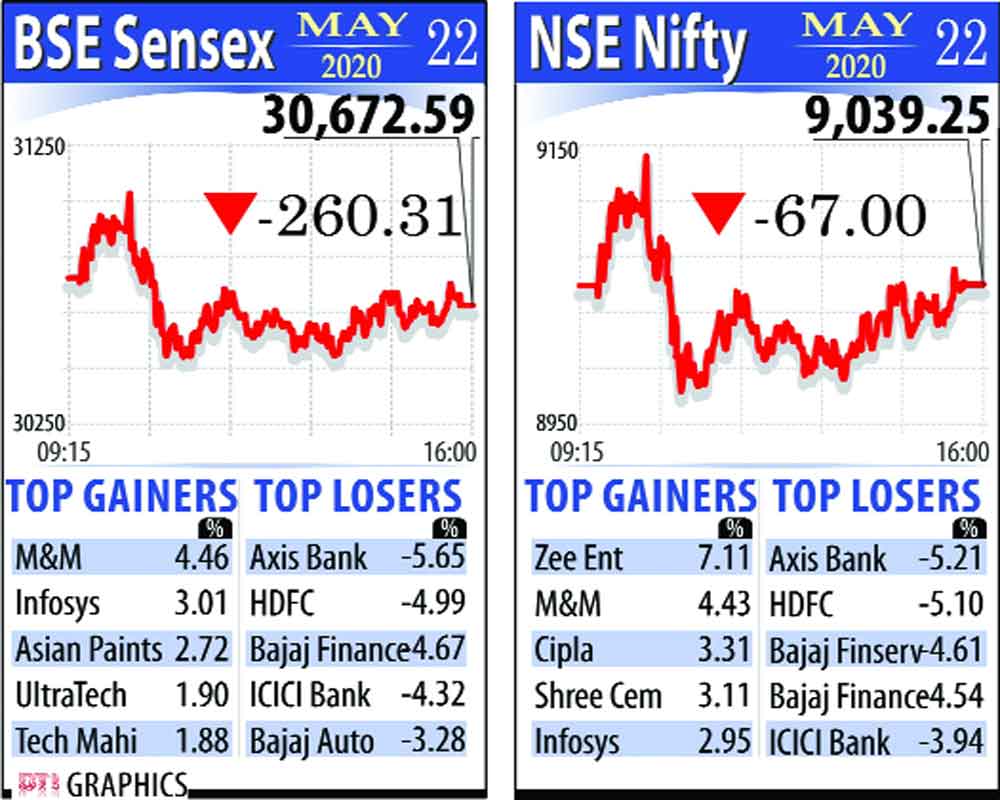 Bank and NBFC stocks on Friday tumbled up to 6 per cent after the Reserve Bank of India (RBI) extended moratorium on loan repayments.

“Markets were hoping some measure from the RBI that could boost the banking and financial sectors but the announcement of the extension of moratorium further dented the sentiment,” said Ajit Mishra, vice-president (research), Religare Broking Ltd.

Kotak Mahindra Bank, however, bounced back and closed 0.91 per cent higher.

The BSE BANKEX fell 2.44 per cent. Among non-banking financial companies (NBFCs), Mahindra & Mahindra Financial Services tumbled 6.31 per cent, Shriram Transport Finance Company tanked 5.78 per cent, Cholamandalam Investment and Finance Company 5.12 per cent, Bajaj Finance 4.67 per cent and Ujjivan Financial Services 3.57 per cent. “The RBI has announced further extension in the moratorium period to end-borrowers from May 31 till August 31. We read this as major negative for all NBFCs (including the ones with strong liability franchises) as this would further delay the overall collection and recovery procedure, and stretch the total liquidity cycle for all,” Emkay Global Financial Services said in a note.

It said that in addition, this would further damage financial discipline, especially for small-ticket borrowers and microfinance institutions (MFIs).

Jimeet Modi, founder and CEO of SAMCO Securities & StockNote said, “Extension of moratorium is good for the economy but in substance, it will negatively impact banks and NBFCs. As a whole, the RBI has taken a calibrated approach to save the economy rather than favouring banks.” The RBI on Friday slashed interest rates, extended moratorium on loan repayments and allowed banks to lend more to corporates in an effort to support the economy which is likely to contract for the first time in over four decades.

The repo rate was cut by 40 basis points to 4 per cent, RBI Governor Shaktikanta Das said announcing the decisions taken by the central bank’s Monetary Policy Committee (MPC) that met ahead of its scheduled meeting in early June.

The RBI supplemented the interest rate cut by extending by three months the permission given to all banks to give a three-month moratorium on payment of monthly instalments on all outstanding loans, providing relief to home and auto buyers as well as the real estate sector where construction activities are already at a standstill.

The moratorium on interest on working capital was also extended by three months. “It was a good effort policy by the RBI though extension of moratorium is a short term measure and not really long term. Rate cuts and reverse repo rate cut are moves in the right direction but risk aversion by banks is still high,” Virendra Somwanshi, MD & CEO, Motilal Oswal Private Wealth Management, said.

Somwanshi added that even though one-time loan restructuring would have led to credit rating issues, it would have been a step in the right direction which the market was expecting.

“Good for companies but banks/NBFCs will be hit in short term particularly when they are staring at higher NPAs.”