A beacon of hope

A beacon of hope 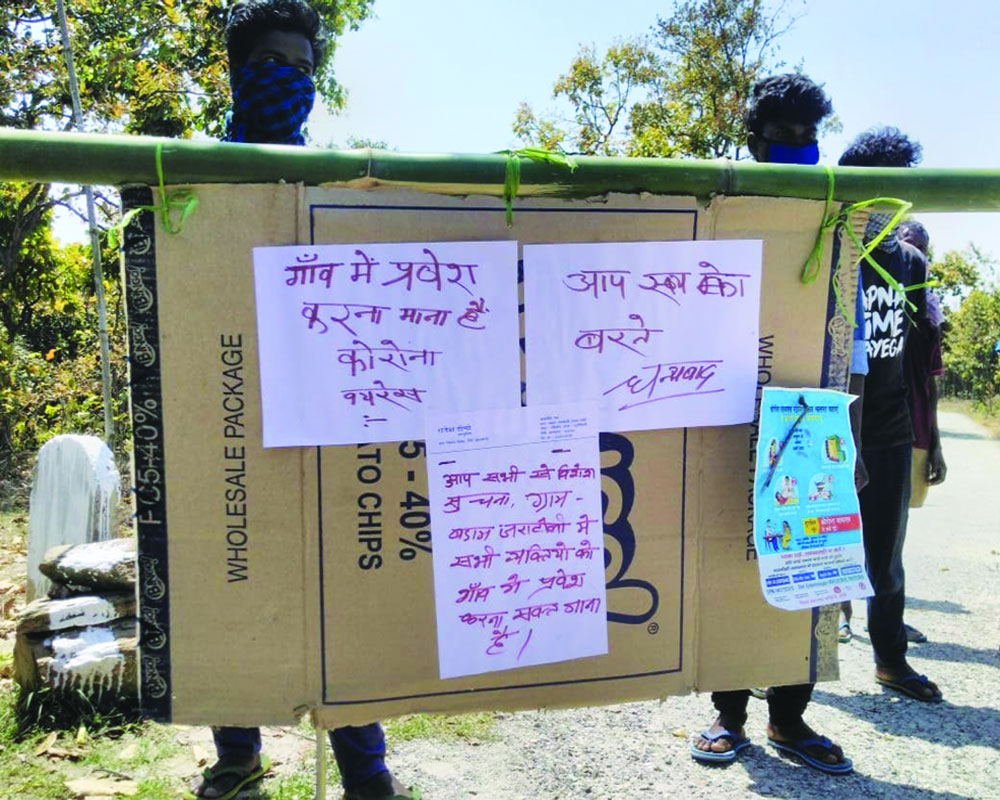 Changes at the individual, household and community level have accompanied the economic impact of the Self-Help Groups in Maharashtra’s Wanoja village

Warora is a small township in the Chandrapur district of Maharashtra. It is best known for the small village republic the great humanist Baba Amte set up for disabled people alienated by mainstream society. The most vulnerable among these are leprosy patients who still suffer from social stigma but find love and dignity in this wonderful village named Anandwan, a forest of bliss.

One of the closest villages to the town is Wanoja, a hamlet of 300 families. Twenty five years ago, it was a bootlegger’s paradise with unruly men stumbling about in a drunken stupor. Today, as we battle COVID-19, this village stands out as a model of resilience. The spirit behind this collective determination is sarpanch Nirmala Geghate, who symbolises the multiple roles women play in a crisis like a pandemic. Primarily as caregivers, women are not just sustaining families but also serving as front-line responders, mainly in the health and service sector of the country, even in rural India.

During my early career in the State Bank of India (SBI), I was posted as manager of the local branch. I also happened to be piloting the self-help group (SHG) movement. One of the first villages that we chose for our pilot project was Wanoja.

Nirmala was a shy woman and there was nothing outstanding about her that could qualify her for a leadership role. But I was impressed by her simplicity and honesty and offered her the role of SBI’s ambassador for the SHG movement in her village. Nirmala was taken aback and asked me why I chose her. I told her that everybody in the village had vouched for her. Nirmala hesitated for several days but finally yielded to our gentle and persuasive prodding. What tipped the scales in our favour was that her mother-in-law was quite supportive and promised to relieve her of a number of household chores. Nirmala convinced neighbouring women to band together and the first SHG was born in the village. It was christened Savitribai Phule Bachat Gat, appropriately named after rural India’s pioneering woman reformer. All women in the SHG, barring Nirmala, were unlettered. Nirmala persevered hard to teach her group members the nuts and bolts of managing the group. Every time she visited the bank, she made one woman accompany her by rotation so that they could observe how a bank worked. In the end, these women started transacting business at the bank independently.

Nirmala’s hard work paid off and the group prospered. This had a multiplier effect in the entire village as several more SHGs emerged. As the SHGs’ focus was more on collective enterprise, the number of businesses the women have set up in this long journey include a retail agency for farm inputs. The most recent success story is the Government support that has enabled each SHG member to set up an independent poultry unit. There are now around 300 poultry units with the chicks, poultry feed and shed, all funded by the Government.

In the process of mapping out her SHG’s trajectory and navigating murky village politics, Nirmala was drawn into electoral politics. Panchayat Raj was already beckoning women to join governance and she couldn’t remain insulated from political currents, much as she tried to avoid them. She represented her ward for two terms and finally became the village sarpanch, a post she has been holding for the last five years. As the elected village head, she oversees the administration of public services. There is 100 per cent literacy in the village now and all boys and girls attend college. No men drink now and there is total prohibition. The village has a very good recreation park for the children.

All houses have indoor toilets and piped water supply. They get filtered drinking water from a plant installed by a power generation company under its CSR initiative. The firm has also set up a medical centre manned by a qualified medical team. The village is periodically disinfected by the company. The sarpanch has made sure that the donors get enough value from their investment and has provided prominent visibility and branding to their work so that they are able to enhance their social bottom line.

Women’s leadership in agriculture is increasingly being recognised as a key to tackling climate change. They are playing a strong role in adapting new technology, spreading information and urging action. They have taken advantage of a slew of agricultural initiatives in the last few years that have focussed on aiding marginalised communities and women farmers.

The COVID-19 and the lockdown have made little difference to life in  Wanoja village. The village head ensured that social distancing and other mandatory lockdown instructions were meticulously practised and all the entry and exit points to the village were sealed. As the sarpanch, Nirmala formed teams to protect her village from Covid-19. She is ensuring access to accurate information to keep the SHGs, the women, their families and their communities safe. These efforts include essential guidance on preventive measures such as social distancing, hand washing as well as how to identify symptoms of the disease. She has also made sure that all the promised Government relief reaches every family.

Reflecting on the success of the SHGs in the village as also the progress made by the gram panchayat, Nirmala says the women of her village never thought they would pull the “cart” so far. She is happy in her role as the “cart puller” and envisions a prosperous future for her village. The first SHG, which began with a monthly contribution of Rs 20 from each member, has now increased the amount to Rs 200, an indication of the increased income and saving capacity of the women.

Changes at the individual, household and community level have accompanied the economic impact of the SHGs. Participating in group meetings has provided women with new opportunities and experiences. They have also become confident in dealing with public officials and authority figures.

The most perceptible change for the women at the household level is the men’s attitudes towards housework. In the past, women had few income-earning opportunities and were mainly engaged in housework. Their husbands gave them little or no assistance in this work. Now, because of the success of the SHGs, the tension between remunerative work and housework has been resolved by men sharing some household responsibilities.

Women of the village are getting increased recognition as the breadwinners and this is substantially altering the family relationships at the grassroots level. To the women, their involvement in SHGs results in fewer “problems” with their husbands. Women, as they say, are now granted more respect and authority within the family unit, reflecting positively on intra-household relationships between the sexes. Aware of the benefits derived from their exposure, village women are increasingly articulating their interest in broadening their knowledge by travelling outside the immediate village environment.

The success story of Wanoja’s SHGs and its women underscores the importance of giving poor people access to loans, savings accounts and other financial services that can support their precarious lives and businesses and enable them to reach their full potential. It can also alter the socially-constructed roles and identities of these women who live in some of the most challenging and fragile contexts. For the resilient women of Wanoja, every disaster is an opportunity to move forward. Recurrent droughts have given the women a chance to show their families that they can be leaders too.

Women have a unique vantage point for identifying trends at the local level that might signal the start of an outbreak. They are the eyes and ears of not only the medical establishment but also the administrative apparatus.

When she looks back at her own evolution, Nirmala is grateful for having achieved a satisfactory level of well-being for her family and the community. The women of the SHGs say they are now able to assert their right to be heard and to have their opinions taken seriously. Over the years, some gains will undoubtedly be reversed; others will be resilient to reversals. Women like the ones in Wanoja provide us shiny silver glimmers of hope as we battle COVID-19.

(The writer is a well-known development professional)