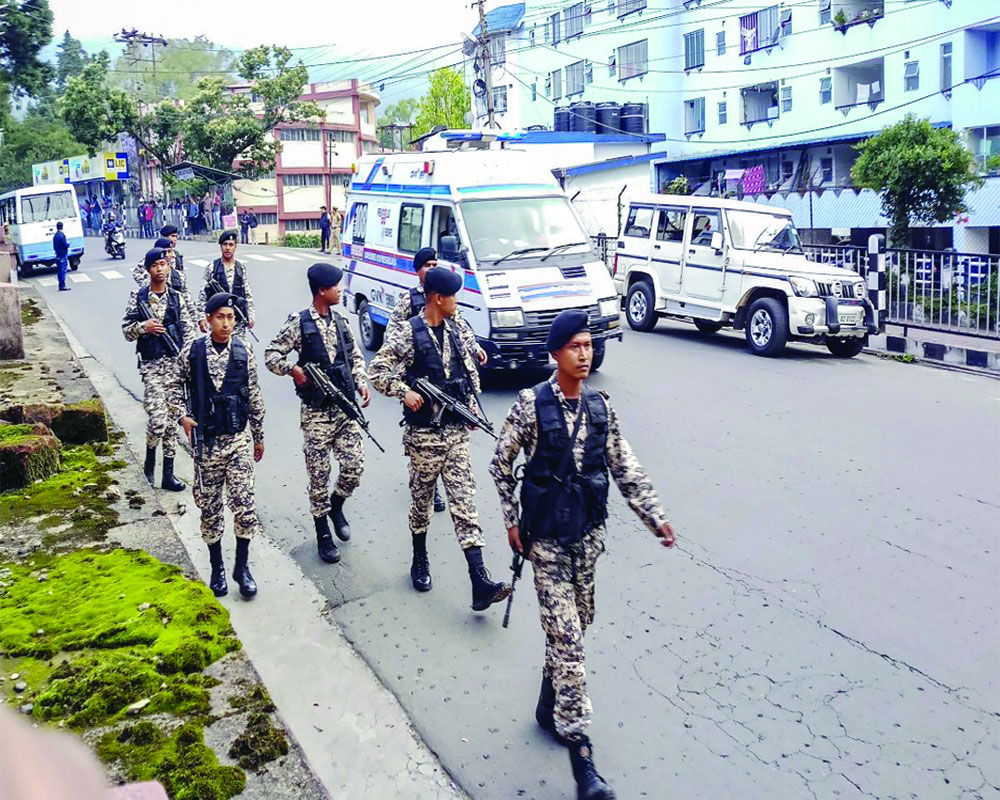 Meghalaya means the abode of the clouds, appropriately named for its incessant monsoon rains. These days though it has been raining posters there — posters that bring back chilling memories of past genocides of non-tribals living in this predominantly tribal State, especially the Bengalis. The capital Shillong is full of shrill cries denouncing that “All Meghalaya Bengalis are Bangladeshis”, “Khasiland for Khasis, Foreigners Go Away.” They are the brainchild of the Khasi Student’s Organisation (KSU) — which actually is the fountainhead of racial hatred, mob violence, extortion, xenophobia, arson and genocide against non-tribals in the State. The Meghalaya administration has since taken down these posters but instead of bringing the culprits to book, the Government of Conrad Sangma has meekly appealed for peace to those for whom peace is synonymous with lynching of settlers. Non-tribals in this State are treated worse than second class citizens. They do not enjoy many of the rights, which under the Constitution are automatically available to citizens living elsewhere and some of these concern even fundamental rights and freedoms. For example, the right to equality of opportunity in public employment under Article 16 is not available to them.

The State of Meghalaya, inhabited predominantly by the Scheduled Tribes (STs) of Khasis, Jaintias and Garos, was carved out of Assam in January 1972. The newborn State had promptly reserved 85 per cent public vacancies — 40 per cent for Khasis and Jaintias, 40 per cent for Garos and five per cent for other SC/STs under Article 16(4) that allows for such reservation. The rest 15 per cent are never given to any non-tribal. Even in private educational institutions, which once used to absorb the meritorious non-tribals as teachers and lecturers, the muscle power of KSU ensures that no non-tribal ever gets a job. There have been cases when, following the due process of appointment, some non-tribal teachers were offered positions but the goons of KSU forced a reputed institution run by missionary brothers to rescind these.

The same is the case with Article 19 which gives every citizen the right to settle anywhere or to practise any profession, business or trade in any part of India, but not in Meghalaya, and not for the reasonable restrictions that apply to all fundamental rights. The right to settle is denied to non-tribals for the protection of interests of the STs in the State while the right to engage in any trade is denied under the Sixth Schedule of the Constitution which deals with special provisions for administration of tribal areas in Assam, Meghalaya, Tripura and Mizoram and has a history dating back to the colonial times. The Schedule envisages Autonomous District Councils of which there are currently 16 in the Northeast. They have power to make laws in respect of areas under their jurisdiction, which, inter alia, cover occupation and use of land, management of forest and cultivation and so on.

Under Clause 10(d) of the Schedule, no non-tribal can carry on any trade except with licences granted by the District Council. It is common knowledge that such licences are never granted or renewed except without illegal gratification running into lakhs of rupees that most non-tribal traders cannot afford. If paid, a large part of it goes to the KSU. But the most potent source of their finance is systematic and ruthless extortion of money from all non-tribal traders and professionals. One doctor told me he had to pay a monthly fee of Rs 25,000 to the KSU. Even though the right to work under Article 41 is listed under the Directive Principles, the right to livelihood has been interpreted as an integral part of the right to life under Article 21 in a number of judgments by the Supreme Court [2011(1) SCC 53, (2014) 14 SCC 127, 2015(6) RAJ 306, (2016) 2 SCC 123, etc] but such a right is not available to the non-tribals in Meghalaya.

It is important to understand the historical context that brought non-tribals into the State in the first place. In the 19th century, the British administration had brought the Bengalis, who were one of earliest Indians to become English-educated, into Shillong, which was then the capital of the composite State of Assam, to help them with their administration; many settled there subsequently and have lived now for generations.

The Sylhet district, which was made a part of Assam, also had close trade ties with neighbouring areas which would later constitute Meghalaya. Bengalis from Sylhet had warm friendly relations with Khasis based on trade and other exchanges since the early 19th century. When Partition forced the Hindu Bengalis out of Sylhet, many came to Shillong. They contributed immensely to the educational, commercial, economic and cultural life of the town, which emerged as a major educational hub in the region. The British had also encouraged the Biharis, Nepalese and Punjabis to come to Assam to help with their labour. Many of these communities also settled in Meghalaya and have lived there for generations. But once Meghalaya was carved out of Assam as a separate hill State, these people suddenly lost not only their right to pursue livelihood but also their right to settle in the place where they and their ancestors had lived.

In the absence of any prospect, most non-tribals began seeking jobs elsewhere and slowly migrating, and those who remained became reconciled to their marginalised existence. All they wanted was to live in peace even sans their rights in a State that had seen no communal riots even as they raged in neighbouring Assam during the 1960s and 1970s.

But things changed drastically once the KSU was formed in 1978. Since then, riots orchestrated by them have become a regular feature. It started in 1979 against Bengalis when some KSU hoodlums deliberately walked over a Kali idol during Diwali in Shillong and were thrashed up by agitated devotees. What followed was the most gruesome genocide and ethnic cleansing of Bengalis that went unabated for days in which the entire State apparatus sided with the perpetrators. The brutality and violence committed against defenceless men, women and children will compare with the worst in human history, though on a much lesser scale.

Post riots, there were waves of exodus of Bengalis from Meghalaya, leaving what their ancestors had built over generations with pride, belongingness, love and sweat. This exodus, which remains undocumented, was no less poignant than the plight of Kashmiri Pandits from the Valley. Strangely, not a single perpetrator was ever brought to justice for what they did — the leader of KSU, Paul Lyngdoh, in fact, later went on to become a Minister.

The KSU-engineered pogroms have repeatedly plunged the State into turmoil. It was against Nepalis in 1987 which led to a year-long curfew in Shillong. Hundreds of refugees — their houses and possessions burnt — had to live miserable lives in schools turned into refugee camps for months, reminiscent again of the plight of the Kashmiri Pandits. In 1992, riots erupted against Biharis — mostly dairy farmers, even their cows were burnt alive. No non-tribal community — Marwari, Sindhi, Punjabi — has been spared from the KSU’s wrath. Most recently, in 2018, the Punjabi Dalits were the targets of its violence. Nobody has ever been indicted for these crimes. The few FIRs that were lodged were all in the name of “unidentified assailants”.

The KSU had earlier splashed posters saying they are “Khasi by birth and Indian by accident” only, conveniently forgetting that without the liberal financial support from the Indian State financed by the Indian taxpayers they often call “Indian Dogs”, their State would collapse in no time, as their own resources can barely meet even 20 per cent of their expenditure. The salary and wage bills of 80,000 Government employees alone is one and half times their own revenues. The gross inequity of the system is glaring. While tribals residing in the Sixth Schedule areas are totally exempt  from income tax regardless of their income levels, the State receives a share of the Central tax proceeds and grants exceeding Rs 12,000 crore, as against its own total revenues of only Rs 3,000 crore (BE 2020-21).

The Khasi civil society does not share any of the violent racism and hatred but strangely remains silent, presumably out of fear. An impotent Government keeps on humouring the KSU while remaining mute and blind to its terrorism and crimes. And the non-tribals continue to live in perpetual fear, knowing that the KSU thugs may descend with their knives upon their lives any time in a State where the rule of law has been usurped by the law of the jungle.