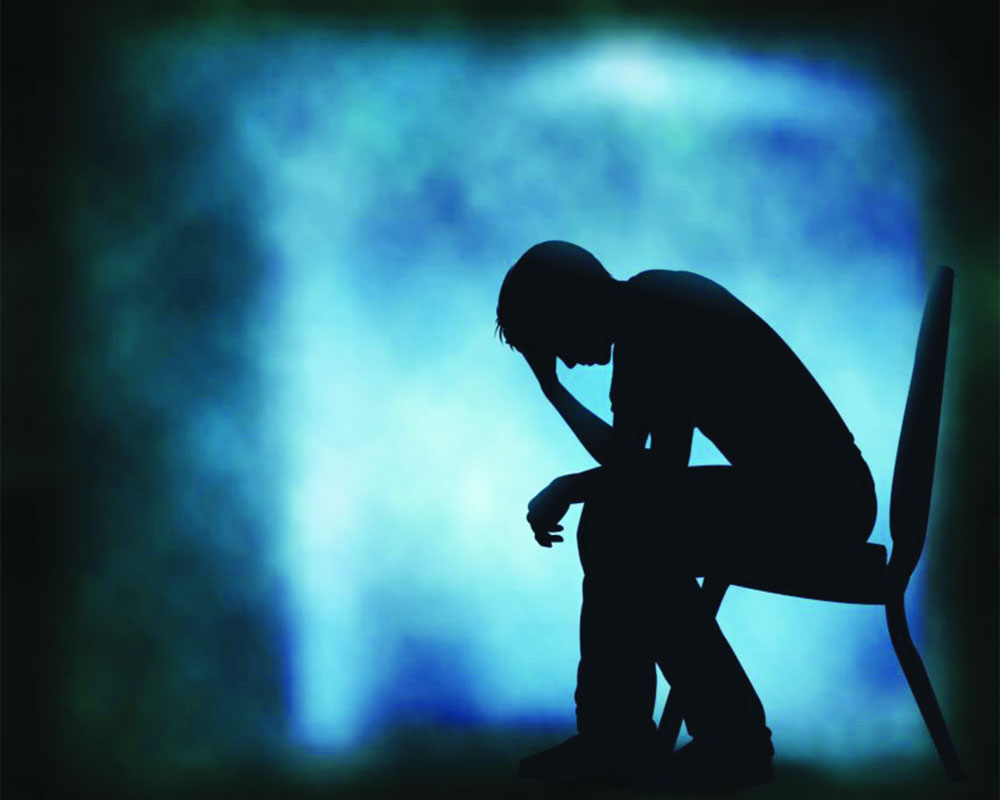 About 7.5 per cent of the Indian population suffers from mental disorders and mental illness constitutes one-sixth of the country’s disease burden

Nothing throws the spotlight on the grave better than the conveniently-ignored issues of mental health, depression and anxiety surrounding a celebrity suicide. It forces us to face the fact that mental health issues exist in the country and that we need to address them as a society and not brush them under the carpet or be embarrassed about seeking help before it is too late. Celebrity suicides make us realise that  a life full of fame, fortune and accolades is not all that it is made out to be and that achieving more will not necessarily make us happier. They reassert the fact that no one is safe from self-doubt, depression, loneliness, mental anxieties and disorders and we need to address these issues on a war footing, particularly during the current pandemic as people are undergoing a lot of social, economic and emotional stress.

Undetected cases of mental disorders create an unrecognised burden on society as well as the workforce, which in turn lead to a massive economic loss to the country. According to an estimate by the World Health Organisation (WHO), mental illness makes up about 15 per cent of the total disease burden around the world. The same estimate also suggests that India has one of the largest affected populations on the planet. As a result, the WHO has labelled India as the world’s most depressed country, closely followed by China and the US.

So, what explanation can there be for this catastrophic state of our mental health? Unfortunately, there are no answers and initiations for solutions in sight; there is no vaccine against suicide on the way. We just need to beef up our mental health system.

According to a study, between 1990 to 2017, one in seven people in the country suffered from mental illness ranging from depression, anxiety to schizophrenia, with no discernible rural-urban differences. And of all the age groups, it is the adolescents who need mental health help the most. Current statistics say that 7.5 per cent of the Indian population suffers from mental disorders and mental illness constitutes one-sixth of the country’s disease burden. It is no exaggeration to suggest that the country is under a mental health epidemic.

Statistically, we are more likely to kill ourselves today than we were ten years ago. But the big question is that if life wasn’t worth living for people such as film stars Sushant Singh Rajput, Kushal Punjabi, Jiah Khan, Pratyusha Banerjee and Cafe Coffee Day founder VG Siddhartha, how can the more ordinary lives hold up? Sadly, people with clinical depression are more inclined to commit suicide after hearing news of high-profile suicides. For instance there  were a couple of suicides by fans of  Sushant Singh Rajput within days of his death and there was a nearly 10 per cent spike in copycat suicides in the US following Hollywood star Robin Williams’ death by hanging.

By and large, suicide is impulsive and if the means do not spring to hand, the impulse passes and people get on with their lives. Another factor, and most pertinent to today’s context is the fact that social isolation is a significant risk factor for self-harm. People who believe (in that altered state of mind) that no one will miss them have little to stand between them and the final act.

Various reports, including one from the Centre for Disease Control and Prevention, US, show a vast increase in suicides over the decade and assert that 54 per cent of these when reviewed didn’t have a previously known mental health issue. Instead, those people were suffering from other issues, such as relationship problems, death in the family, substance misuse, job losses, financial problems, a sudden crisis or traumatic events.

Suicide is a result of despair and hopelessness, which can be fed by mental illness or by life’s circumstances, but is almost always the result of both.

Renowned psychiatrist Professor Thomas Szasz, in his book, The Myth of Mental Illness, argues that psychiatric diagnoses were too vague to meet scientific medical standards and that it was a mistake to label people as being ill when they were really, as he termed it, “disabled by living” — dealing with vicissitudes that were a natural part of life.

In the late 19th century, researchers explored the brain’s anatomy in an attempt to identify the origins of mental disorders. The studies ultimately proved fruitless and their failure produced a split in the field. Some psychiatrists sought non-biological causes for mental disorders while others doubled down on the biological approach and increasingly pursued a hotchpotch of theories and projects. The split is still evident today.

There’s a long history of scientific research searching for specific biological causes of mental diseases.  In 1885, the Boston Medical and Surgical Journal noted that the increase in the number of those with an unsound mind had been exceptionally rapid in the last decade. Mental asylums built earlier in that century were overflowing with patients.

This pointed to a possible relation of rise in insanity to the rapid spread of syphilis. What we now know to be a late stage of syphilis was at that time termed “general paralysis of the insane.” Patients were afflicted by dementia and grandiose delusions and they acquired a wobbly gait. Towards the end of the century, it became evident that as many as one in five people entering a mental asylum had “general paralysis of the insane.” Proof of a relationship between the condition and syphilis came in 1897 and marked the first time that a psychiatric illness had been discovered to have a specific biological cause. But after the work on syphilis, researchers couldn’t pin down any other correlation of a disorder of the mind to a biological pathology.

Neurologists of the time then heavily focussed on autopsy findings of mentally-disabled patients. But none of these mental illnesses left any trace in the solid tissue of the brain. Dr Anne Harrington — a renowned historian who had done extensive work on evolution of psychiatry as a stream of medicine — framed this outcome in the Cartesian terms of a mind-body dualism: “Brain anatomists had failed so miserably because they focussed on the brain at the expense of the mind,” she said.

Austrian neurologist and the founder of psychoanalysis Sigmund Freud acknowledged the fact that the case histories of patients that he wrote should read like short stories and lack the serious stamp of science. He justified the approach by pointing to the inefficacy of other methods and asserted that there was “an intimate connection between the story of the patient’s sufferings and the symptoms of his illness.”

Although psychiatry is yet to find the pathogenesis of most mental ailments — mild and severe — it is important to remember that medical treatment is often beneficial even when pathogenesis remains unknown. Even in instances where the discovery of pathogenesis has produced medical successes, it has often worked in tandem with other factors. Without the discovery of HIV, we would not have anti-retroviral drugs and yet the halt in the spread of AIDS owes much to simple innovations, such as safe-sex education and the distribution of free needles and condoms.

There are quite a few hypotheses on pathogenesis of mental illness and it is too early to say whether any of these could hold the key to them. Many people have been helped with medication and psychotherapy. There have been other approaches, such as cognitive behavioural therapy, which was propounded in the 70s by psychiatrists. They posited that depressed individuals habitually felt unworthy and helpless and that their beliefs could be “unlearned” with training. An experiment in 1977 showed that cognitive behavioural therapy outperformed one of the leading anti-depressants of the time.

The reason for India to lose its mental health is sheer lack of awareness and total insensitivity to the issue. When it comes to physical health, people are so aware that they know everything there is to know: What super-foods to eat; the most cutting-edge workouts to stay fit; how to monitor every aspect of their health with state-of-the-art fitness technology and what health supplements to take. But when it comes to mental health there is very little awareness even in cosmopolitan cities.

And to add to this, there is still a stigma around mental illnesses. This leads to a vicious cycle of shame, suffering and isolation worsening the situation further. Although there have been several campaigns on mental health in the country, the count of suicide attempts due to depression hasn’t gone down much. Bollywood actor Deepika Padukone, who has battled depression in the past, has been trying to spread awareness with The Live Love Laugh Foundation (TLLLF) supported by her. TLLLF released a report in 2017, based on views of 3,556 respondents across eight Indian cities that highlighted the importance of focussed stigma-reduction programmes. It said that as many as 87 per cent of the respondents in the survey felt mental illness was a disorder.

However, the biggest impediment to sound mental health in the country is the fact that there is a severe shortage of mental healthcare workforce. According to the WHO, in 2011, there were 0·301 psychiatrists and 0·047 psychologists for every 1,00,000 patients suffering from a mental disorder in India.

Currently there are less than 4,000 mental health professionals available for a demography of about 20 per cent (as per a WHO prediction for India by 2020) of 1.3 billion Indians suffering from mental illnesses of varied severity and type. Such issues of basic need fulfillment aggravate the scale of the problem and need immediate attention of policymakers and health authorities before they explode in an uncontrollable epidemic.

(The writer is a doctor by profession and an author)