A tricky road ahead

A tricky road ahead 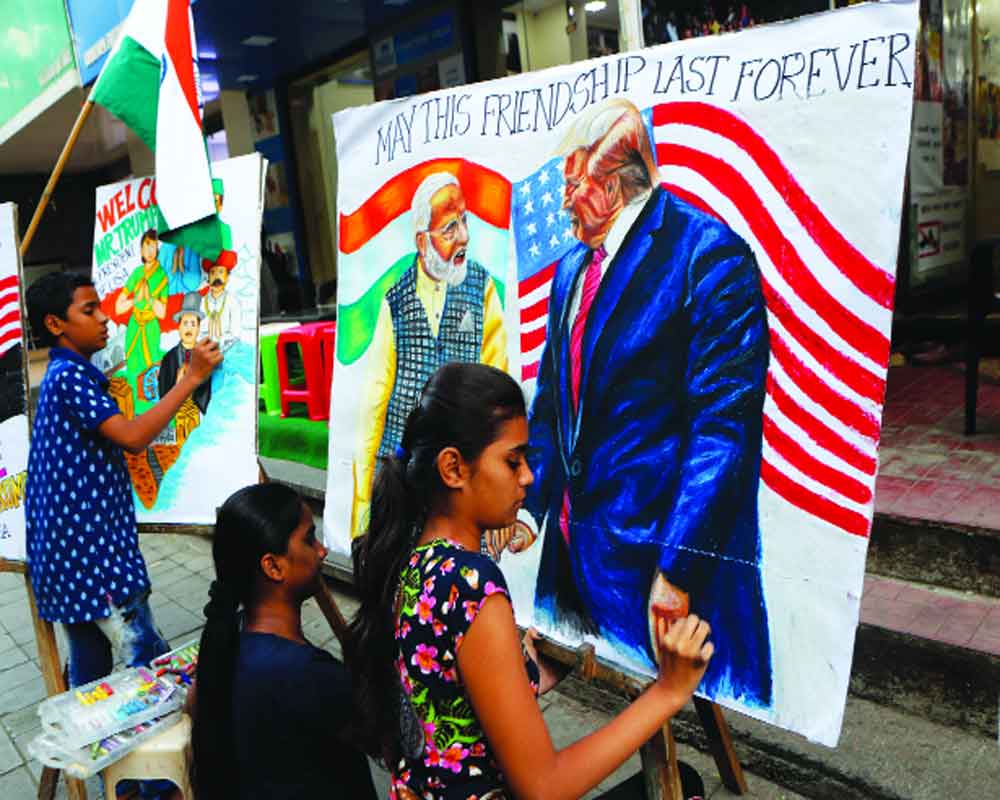 As US President Donald Trump visits Ahmedabad-Agra-Delhi today, the spectrum of expectations remains variegated. Although the agenda of the bilateral meet seems holistic, with a 12-member delegation  accompanying Trump during his two-day visit to India, apprehensions remain regarding the deliverables coming out of the trip.

Besides, there have been quite a few changes in Trump’s itinerary and agenda, signalling last- minute negotiations, disagreements and possibly discontent on either side, on the key issues of trade. The US has adopted a hard negotiating position vis-a-vis India and has signalled its unwillingness to retract from that stance. Among other things, the US has been reluctant to reinstate India’s Generalised System of Preferences (GSP) status and has continued to seek market access for its dairy products.

New Delhi has held out till now, but it is going to be difficult to predict the course of negotiations in the coming future. If nothing concrete comes out of bilateral trade talks in the few months following Trump’s visit to the country, he could further harden negotiating grounds for the US, as was the case with China.

Even though many have held that the centrepiece of this visit, a substantive/mini-trade deal between the US and India, may have collapsed, the political signalling of Trump’s visit is strong for both the countries. For India, it means a continuation of the growth in strength of Indo-US ties with each successive President.

The short, 36-hour stay of Trump is being utilised in the most effective way, in so far as signalling is concerned. The Ahmedabad “Namaste Trump” event, Agra’s Taj Mahal stopover and the critically-decisive talks between Prime Minister Narendra Modi and Trump along with the visit to the Raj Ghat, tie concrete deliverables with cultural symbolism.

For the US, as the domestic primaries are heating up, running up to the presidential elections at the end of the year, the timing and the targetted constituency of the Indian-Americans as vote bank, could draw significant advantages for the Republican Party and the Trump administration.

Trump’s tweet that, “We’re not treated very well by India”, but that he happens to “like Prime Minister Modi a lot” underscores the comfortable-uncomfortability of this visit. Both leaders realise the value of each other’s partnership in times when China is not the same option for partnership for either country as they are for each other.

Trump’s declaration that he is “saving the big deal” with India for later and he “does not know” if it will be done before the presidential election in November, signals two things: First, that the ongoing negotiations on trade are a hard bargain for either side and that neither party is willing to give concessions or cede positions. Second, both sides have desisted from earmarking a deadline for the finalisation of these negotiations, which speaks of the complex nature of the consultations involved.

In the end, the lack of availability of an immediate trade deal to sign for Trump may not be a pressing irritant. India’s trade surplus with the US has significantly come down in the last few years owing to energy imports from it, which is the sixth-largest source of crude oil imports for the country currently. Besides, the US continues to be India’s largest trading partner, with bilateral trade expected to cross $150 billion for the first time this year.

In the absence of any mega trade deals, both sides will tether the projection of successful US-India bilateral relations to defence deals, security cooperation and a commonly-visualised regional order in the Indo-Pacific. As such, defence deals are likely to be the highlight of the visit. In particular, the $2.6 billion deal to buy 24 Seahawk helicopters from American defence manufacturer Lockheed Martin Corporation is going to capture headlines.

The Cabinet Committee on Security headed by Modi recently cleared the purchase of the 24 helicopters and the deal is going to benefit India as these platforms are expected to boost the Navy’s anti-submarine warfare operations — an emerging area of maritime cooperation with the US and a critical component of the Indo-Pacific security resolve. At the level of the regional order in Asia, two issues will be very critical during this visit. The Trump administration could nudge New Delhi to play a larger and stronger regional role in the Indo-Pacific region.

India should deftly employ strategic hedging to work with both Iran and the US. While New Delhi knows that for a middle power like it, balancing between two major players — the US and China — is going to be much easier than balancing between a major force and a regionally-strong yet sub-middle power like Iran. The real challenge of diplomacy for India lies in its ability to navigate successfully without creating hostilities, especially in times when partisan geopolitics has threatened to become a diplomatic norm, beckoning the polarisation that characterised half a century before the current one.

India should be wary that it does not cede ground in dealings with the hard negotiators accompanying Trump and end up doing what doesn’t suit its national interests — an Iran yet again. Even if nothing much comes out of the upcoming Trump visit, India should prepare for uncompromising negotiations. sYet, the visit has the potential to catapult bilateral ties to a new level and set new grounds for engagements in the future. If Modi has initiated the culture of “informal talks” with China, with the US it is the “grand events” that mark a distinct note in bilateral relations. As such, the Ahmedabad event in the cricket stadium further pushes the idea of a large gathering to welcome visiting Heads of State towards a concrete diplomatic norm.