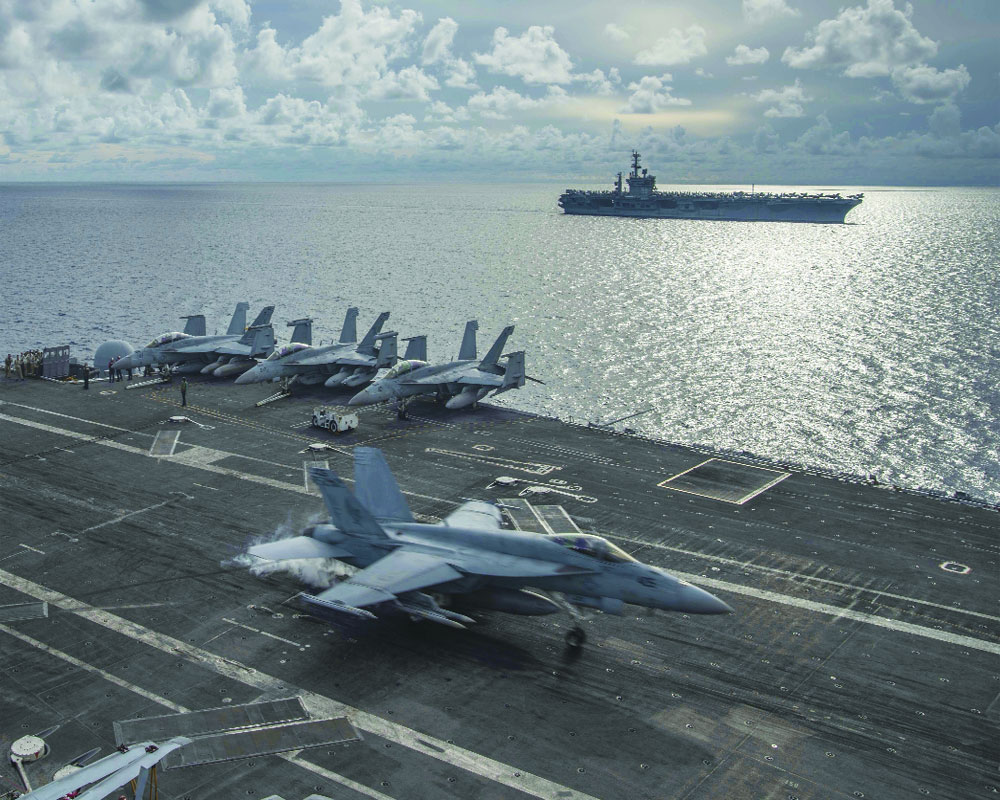 Beijing’s belligerence is on the rise all around, whether it is unleashing a new terror regime in the name of “national security” in Hong Kong, the attempts to encroach on Indian land along the border or the bid to usurp the sea lines of communication in the South China Sea. However, the Xi Jinping regime listens to stiff challenges to its hegemony, as seen in the steady disengagement at the Line of Actual Control (LAC) with India after New Delhi stuck to its guns to secure its sovereign right on its land. Nevertheless, the brutality of the People’s Liberation Army (PLA) in Gulwan, in contravention of the bilateral agreement, has weakened the India-China ties revived in 1988.

The South China Sea has witnessed the latest round of aggression from mainland China. Its plan to encircle the island chain with a new network of security has hogged the limelight.

What does all this signify? Xi’s authoritarian streak is reassertion of his power and authority. The SCS is a contested territory. Recent developments indicate that China is planning to develop an Air Defence Identification Zone (ADIZ) around the Spratly, Paracel and Pratas islands in the SCS. An ADIZ is a zone of airspace over land or sea in which the identification, location and control of aircraft are performed by a country in the interest of its national interest. Records in the past indicate that China had unilaterally declared an ADZ over the contested East China Sea in 2003 when Hu Jintao was in power. Hu, who preached the doctrine of “Peaceful Rise” of his country, had even walked on the same path as pursued by his predecessors.

When Xi took over from him in 2012, he wanted China to materialise “China Dream” with national rejuvenation, Belt and Road Initiative, and expanding China’s debt trap all around the world. Indeed, he has clearly delineated China’s imperial designs by displaying the country’s total disregard for a rule-based international system. The SCS, which covers critical sea lines of communication, is today gradually moving under China’s red regime. This international territorial dispute involves mainly six claimants: Brunei, China, Malaysia, the Philippines, Taiwan and Vietnam. But Beijing says it has full claim over all the islands chain.

Why the international community is seriously disturbed at present with the prevailing situation in the SCS? The main problem is that of China’s hidden designs to turn the whole set of islands into a part of its sovereign territory. In the recent months, Beijing has intensified its activities in the region. In the beginning of April, a Vietnamese fishing boat was rammed and sunk by a Chinese coast guard ship in and around the Paracel Islands. Interestingly this incident took place only after Hanoi sent a diplomatic note to the UN protesting China’s historic “Nine Dash Line” claim over the SCS at the end of March. In fact, Vietnam has been the most vocal critic of China in regard to its activities and claims over the SCS. It has been in the news that Hanoi might consider pursuing an international legal course against Beijing the way it was done by Manila in 2016. That year the Permanent Court of Arbitration at the International Court of Justice at the Hague in the Netherlands had ruled that China had no historic claim over the waters of the SCS. As per the ruling of the tribunal, China’s claim to rights of the water bodies of the SCS is contrary to the UN Convention of the Law of the Sea (UNCLOS). It must be mentioned here that only the UNCLOS can determine which countries can claim economic exploitation rights, based entirely on geographic features. Therefore, the international tribunal rejected China’s maritime claims in the light of its “Nine Dash Line” over these areas. And the court said that China’s claim has no basis in international law.

But in complete disregard for the international laws, China rejected this ruling, by calling it “ill-founded”. And Beijing advocated that the tribunal had no right to decide on the matter. Thus China, despite being a member of the ICJ, even refused to accept the SCS Arbitration Award issued by the Court at the Hague.

China’s actions in the SCS are contributed to weakening of the international laws in the sea. It’s for the first time in the 1990s, a Code of Conduct (COC) in the SCS was raised by the Association of South East Asian Nations (ASEAN). But only in 2002, at a gathering of the Foreign Ministers from the ASEAN and China in Phnom Penh, Cambodia, a COC in the SCS was mandated by a declaration amid heightened tensions in the area. Therefore, the COC is based on a Declaration on the Conduct of Parties in the SCS signed by China and 10 ASEAN nations in the same year. This area has one of the world’s most crucial shipping lanes which are supposed to be rich in both marine and mineral resources. Therefore, the area attracts strong contestation from the nations in and around it. But the problem in evolving such a code is mainly due to differences between the ASEAN and Beijing. It has been argued that the COC can never be an instrument to settle territorial disputes. Its framework is more symbolic than substantive.

Moreover, as the Covid-19 disrupts the normal life, the ASEAN nations are looking for more time to finally shape the COC. In fact, in 2019, a three-year timeline was drawn at the 22nd ASEAN and China summit held in Manila in 2019. This time frame was proposed by China only. But then how does this COC can reduce the current tensions between China and the rest of the claimant nations. Precisely, the COC is a legally binding document that will be able to manage how countries act within the SCS despite disputing territorial claims. Even earlier, China was softening its stand on certain provisions of the COC. These included provisions on the Western military presence and continued oil and gas exploration activities in the entire zone. But today working on a deadline to implement the COC seems difficult even by 2022 because of China’s belligerence and the current pandemic.

What has taken place on July 13 has again brought to light the entire debate of the SCS to the forefront. The US on this day officially dismissed China’s claims to offshore resources across the SCS as completely unlawful. US Secretary of State Michael Pompeo issued a statement clarifying America’s position on maritime claims on the SCS saying that China has no legal ground to impose its will on the region. Besides, Washington has currently aligned its position on the ruling declared by the International Court in 2016. Pompeo said, “The world will not allow Beijing to treat the SCS as its maritime empire. America stands with our Southeast Asian allies and partners in protecting their sovereign rights to offshore resources, consistent with their rights and obligations under international law.” Beijing must understand how an America-led coalition can act against its arrogance in the SCS.

The core issue at the centre is the international pressure on China that has been inconsistent so far. It’s not only America and Japan’s interest, the rest of the powerful nations such as India, Australia, Singapore, etc, in the Asia-Pacific must chalk out joint strategies to counter any Chinese expansionist moves across the international sea lines of communication. Taking full advantage of the periods of neglect from the international community, China has quietly built up its structures in the SCS.

The best possible way is to remind and pressurise China to obey international laws in the sea. And for the US, and the rest of the nations concerned, it is clear that China has taken the entire SCS in its control. Hence, countries such as Indonesia, Malaysia, Philippines, Thailand, Vietnam and Japan need to assert their maritime rights time and again in all the contested zones.

If China is to rise peacefully, it is bound to respect international law. Crafting an Asian order with a Chinese leadership has thus all its pitfalls. Its opaque, authoritarian and aggressive posture will disturb peace and tranquility in the Asian continent. Trusting China will be a serious mistake. Its constant incursions, including salami-slice strategy, have become a serious threat for neighbouring nations like India. Despite having robust diplomatic understanding and agreed code of conduct to maintain stability on the LAC, the recent Chinese brutality towards Indian security forces in the Galwan Valley once again offers the international community to build up a democratic will to force this nation to respect territorial integrity of other nations. Henceforth, in the light of China’s muscle flexing, a US-led coalition must work relentlessly to maintain freedom of navigation and peace in the troubled waters of the SCS.