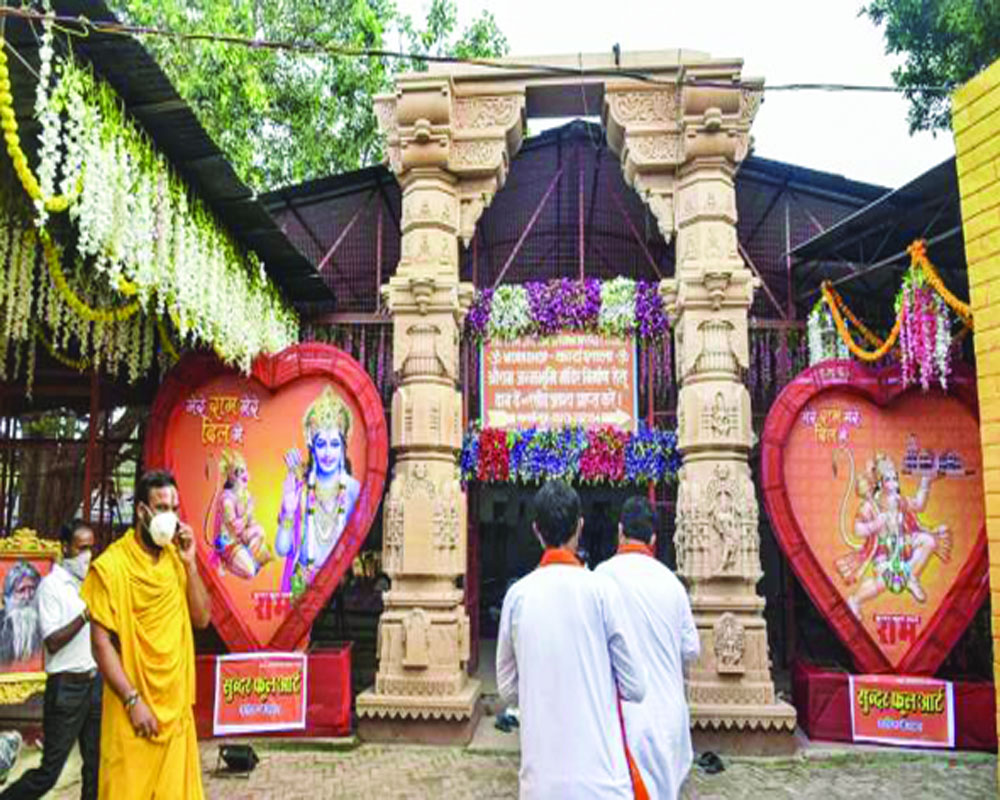 As the foundation stone is laid for the temple, we must not let triumphalism get the better of Lord Ram’s dharma

Years of politics and the clash of “isms” have actually overlooked the cultural consciousness and the civilisational ethos that Lord Ram represents. Revered variously as Maryada Purushottam Sri Ramchandra Raja of Ayodhya or the Imam-e-Hind, he has, beyond being a central figure of the Hindu pantheon, been an anchor of the Indic way of life and the way it should be lived. As Swami Vivekananda said, “he is an embodiment of truth, morality and ideals.” The God-king of Ayodhya, who set an example of what social order should be and how it should be conducted, is, therefore, more of a human construct, one we could model ourselves after easily. And he was a selfless leader of people, putting them first. His wars were on principle of the right over wrong; he could have converted all the rakshasas into his own clan after killing Ravana but he chose not to. Simply because he respected his limits and that of others and believed in upholding the sense of righteousness. It is this vision that pervades our collective consciousness and regardless of whether a temple at his birthplace was demolished and a mosque built in its place, which in turn was overrun, the fact is Ayodhya is unanimously believed to have been the place where he was born. In that sense, it is our existential fountainhead. He is a belief and emotion so strong that restoring his birthplace is not about historical corrections but a return to the truth as it should be seen and practised. To that extent the bhoomi pujan, or the foundation-stone laying ceremony at the site, is not just a milestone, it is an edict on what dharma should be. It should not be about Hindu triumphalism but about upholding values exactly the way he would have wanted. Lord Ram was a pluralist, not an isolationist. Celebrating him shouldn’t be about symbolism, for majoritarian might is measured by grace, not by muscularity of an imposition. But that is a tall order in today’s show and tell politics. What began as a mass movement to reclaim the site, launched by the BJP in 1989 to chart an alternative political path, gained massive traction once the then party supremo LK Advani began a Rathyatra from Gujarat. Although he couldn’t complete the yatra, it aroused passions across the country and paved the way for the party’s ascendancy to political power. And in the process, religiosity overtook secularism as an electoral agenda. Only social justice forces in the shape of VP Singh, Mulayam Singh Yadav and Lalu Prasad Yadav held out. But that led to polarisation and Ram became less of a guiding visionary with his neo-disciples becoming more like avengers of historical insult. Hinduism became Hindutva. In fact, the Congress, too, was taken in by the Hindutva wave with Rajiv Gandhi himself allowing the opening of the Babri Masjid gates and ‘shilanyas’ prayers to be held inside for fear of losing the Hindu vote. This opened the floodgates for the right-wing fringe like the Vishwa Hindu Parishad (VHP) and the Bajrang Dal to claim political centrestage. That’s when the temple became more than a symbolism, a runaway cause to justify everything from a majoritarian perspective. Rajiv Gandhi had grossly misjudged that the mosque, too, could co-exist. That was not to be. Advani had merely sought a balanced discourse where Hinduism could be defined not by exclusion, revisionism and minority appeasement but as an inclusive philosophy of national life. One that translated into the reasoned prime ministership of Atal Bihari Vajpayee. Unfortunately, today he and many seniors have been benched, not even consulted or properly invited to temple affairs. Meanwhile, the hardline extremism and otherisation of non-Hindus have become the centrifugal force of the BJP, one that has been condoned by a tacit electorate, which returned the Narendra Modi Government with a brute majority. One that has the silent approval of the Opposition, which has fallen in line, swept aside by the tide of identity politics.

So what after Ayodhya? Is it the culmination of temple politics or will it be milked further electorally? Or will it spur a demand for more reclamations at Kashi and Mathura? At one time, hardliners would have been enthusiastic but the BJP’s ideological anchor, the RSS, is itself cautious about continuing the temple issue beyond the Ram janmabhoomi. In fact, RSS chief Mohan Bhagwat has categorically said that there are no plans for either Kashi or Mathura, that the RSS does not get into agitations and that the Ram temple was an exception. Having won a massive mandate, the BJP had to address its core constituency and has delivered a promise made many years ago and which at one time seemed just manifesto material. But both the RSS and the BJP are also realist about consolidating power. While the nation heaved a collective sigh of relief at the resolution of the Ayodhya dispute, there is undoubtedly a sense of fatigue about continuing politics in the name of Ram. There are much bigger concerns in the post-pandemic world to tackle, the bleak economy and restarting the nation once again. Even Ayodhya wants to get back to normal, hoping the temple will accelerate the local economy. Besides, the BJP’s image has already taken a beating courtesy hate crimes, cow vigilantism and the anti-citizenship law protests and it wouldn’t want to create new faultlines or give ammunition to others to do so. Ram rajya may be ideal but the BJP has got to get real.