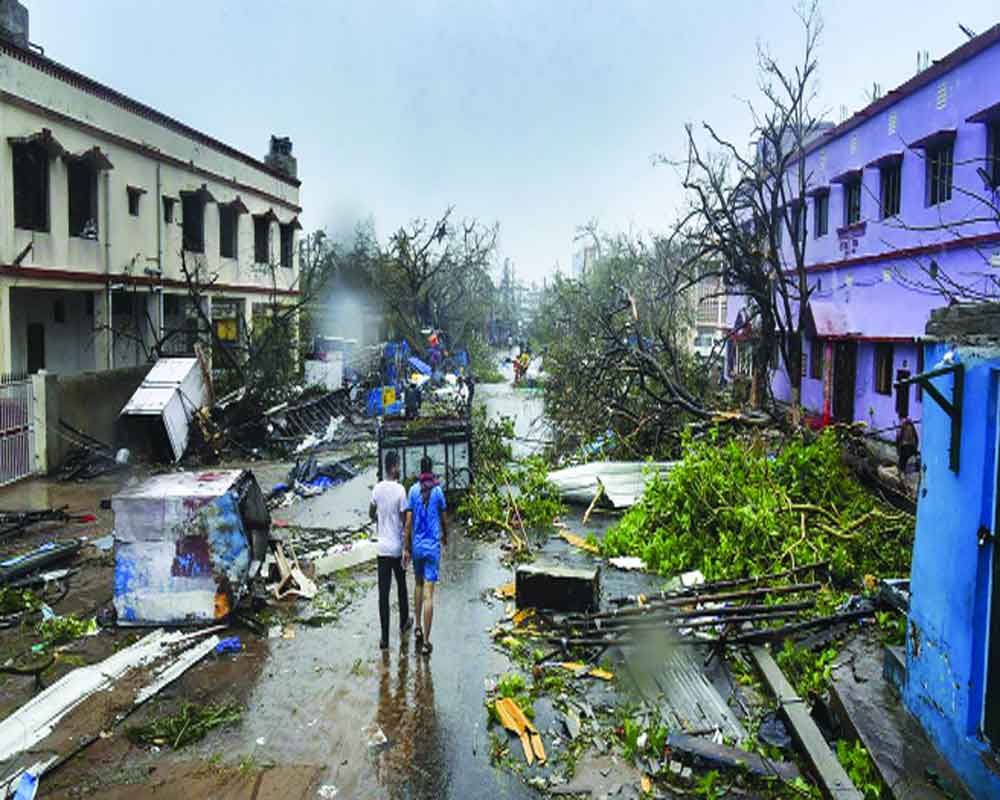 With the face of Kolkata and Sundarbans changed forever by Amphan, the Centre vs State war should stop now

The trouble with facts and figures is that they are good enough for comparative data analysis, historicity and references but fall short of mapping the extent of human tragedy, the loss of human settlements and the death of man-made legacies. So though the super-cyclone of 1999 claimed over 10,000 lives, compared to the 80-odd caused by Amphan at a time when early warning systems and disaster preparedness have improved, the latter has left a rampaging trail of destruction unseen in the last two decades. Although 500,000 people had been evacuated, the wind speed of 185 kmph hammering in with brute and unsparing force from the Bay of Bengal meant that it disfigured the iconic face of Kolkata as we knew it. The city has lost over 9,000 big trees that lined its avenues and wrapped around its colonial splendour. The howling storm tore through the facades of a cultural entity called Park Street, crumbled heritage ruins down to their last bones and shattered the egoism of modern-day highrises which couldn’t hold their glass showcase as they splintered wildly. Even at the time of writing, cellphone towers and power supplies are out in many areas. Kolkata airport looked like a sea with untold damage to infrastructure. Mangled heaps of metal, cars that had turned turtle or telescoped into houses, debris and uprooted trees and poles have buried lives, livelihoods and identities. The official cost of destruction may be estimated to be at Rs 1 lakh crore but rebuilding an emotion and culture that had held out for hundreds of years is quite something else. For Kolkata has never been about inanimate structures, each of them had a life force of its own. That moral invincibility, a sense of being really, has taken a big hit. Not only that, Amphan’s rage has caused irreparable damage to the ecologically fragile Sundarbans region and its people. Mud embankments in the delta, a UNESCO site, were breached as the hungry tide whipped up by the churner flooded large swathes of the islands and submerged them into oblivion. With sea water entering agricultural land, officials now fear that more than two lakh rice farmers could be severely affected. Nobody knows if the tigers, numbering around 100, are safe or not. The marine ecosystem has also shape-shifted overnight, the mangroves reduced to clumps. Almost the same part of the Sundarbans was devastated last November by Cyclone Bulbul and the State Government had asked for a financial relief package worth Rs 23,000 crore from the Union Government. Political wrangling on the package was still going on when Amphan pummelled Bengal further. Besides the State makes up 15 per cent of India’s food supplies, so the nation has a broken conduit. That’s the reason why Chief Minister Mamata Banerjee called for an end to politicisation and Prime Minister Narendra Modi rightly responded by doing an aerial tour besides announcing a Rs 1,000 crore package. And although media coverage of the crisis smelt of bias despite the scale of devastation, any kind of politicisation over relief and rehabilitation should be avoided by either side. For given the COVID-19 pandemic, nobody would want Bengal to become an uncontrollable hotspot with thousands displaced and forced to seek shelter in crowded camps.

Although the National Disaster Response Force (NDRF) had done mass evacuations in both Bengal and Odisha, its teams now have the dual task of rehabilitation and disease control. It is being helped by the State police and firemen but saving lives is still a humongous task. Lessons learnt from Fani have, however, helped NDRF deploy tree-pole cutters in the areas which were expected to be worst-hit. Which is why the State could resume some patchy bursts of power supply in 24 hours. But it is relocating the displaced and evacuees that is causing a bigger problem. Due to social distancing protocols in place, the cyclone rescue centres, which could hold about 1,000 people, can now shelter only 400-500 locals. With a lot of physical handling in relief and rescue efforts, teams also have an additional responsibility of ensuring that locals who moved into shelter homes do not contract the disease. Apart from routine medical assistance to the injured and hurt, there is a simultaneous need for testing given the high infectivity of the disease. Let us not forget that returnee migrants also form a part of the evacuees. Clearly, Amphan has been an epic humanitarian disaster for East India. And a precursor to what a rough monsoon could do to coastal states amid the pandemic. So for once, the Centre versus State war or ruling party versus Opposition won’t make sense to anybody, not even the politicians.