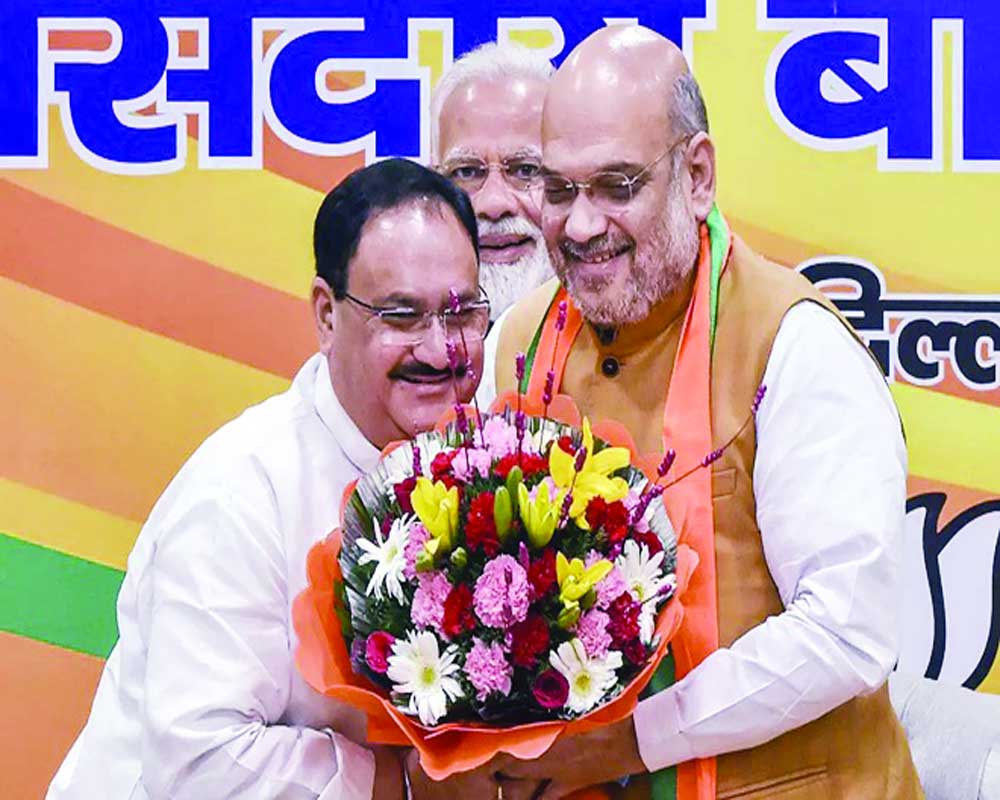 J P Nadda is being considered a proxy for Shah but has organisational strengths of his own. Will he be allowed to rise?

When LK Advani was the BJP president and clearly the more “seen” face of a resurgent Right, having steered the Rathyatra and the temple campaign in Ayodhya, he stepped back and proposed the name of the moderate and avuncular Atal Bihari Vajpayee as the party’s prime ministerial candidate. That was in 1995 and Advani’s wisdom lay in understanding why governance needed a softer, inclusive and acceptable face and a broader alliance with other parties. He had the foresight to set the foundation upon which a winning formula could be built. In that sense, the BJP president’s post became important in carving out a legitimate space for the Right within the coalition template of the times and ensuring that it emerged as a sound electoral alternative to the Left of Centre Congress-dominated narrative. That was a tough time of building and managing the party, positing all that the Congress was fast-losing — a credible organisational decorum, regular elections, fair processes and an inner-party democracy. To that extent, the party president’s post was originally intended to be sacred. The arrival of Narendra Modi and Amit Shah clearly changed all that, the two building the BJP’s base not so much by processes but the weight of their persona. While Modi concentrated on building a pan-India image as a trusted leader, deputy Shah took up backroom mathematics and personally weighed in on even the microscopic, unit-level decisions of the party. During his tenure of over five-and-a-half years, Shah’s focussed aggression strengthened the BJP’s matrix and ensured its political conversion as the party’s best ever electoral performance. Barring a few setbacks in State polls, the party has managed to become the single-largest in the Lok Sabha. That gave him more than stature; the cadres held him in awe. And he revelled in the arrogance of that absolutism, pushing most contentious issues in the BJP manifesto as Home Minister in the Government, a man in a hurry to prove his heft in the party than in people’s minds. And now that he is the Home Minister, he is duty-bound to honour the party’s “one person, one post” formula and has handed over its reins to Jagat Prakash Nadda, a loyalist and a low-key worker of the Rashtriya Swayamsevak Sangh (RSS), the BJP’s ideological anchor that, at this point of time, has complete hold of policies and deliverance, and cares not much about realpolitik. In many ways, therefore, Nadda is being considered a proxy for Shah, who would like to be remembered as the usherer of Right wing legacies and a neo-cultural revolution, one that seeks to overturn liberalism as an imposition and Hindu theocracy as the natural evolution of history — the Ram temple, the abrogation of Article 370 and the review of citizenship based on ancestry. Shah wouldn’t want to relinquish this helmsmanship of BJP’s transitional moment. The ascension of Nadda, therefore, seems to be about ticking off the right boxes. Besides, it also allows Shah to escape the heat arising from the citizenship row at the moment. Seen as the architect of the otherisation politics in the country and linking the party’s agenda to Government policy, the delegation of party responsibilities to Nadda is an attempt to seemingly dilute this autocracy.

Nadda may be following Shah’s footsteps but in the end will have to be the media face and explain the BJP’s most difficult phase — keeping the faith of the Lok Sabha verdict and presiding over the social unrest over citizenship. The extent of civil society protests proves that it is fast losing hope in the BJP as a “party with a difference.” If the States the BJP lost after the general election are any indication, then the people now want it to account for its non-performance on the economy and jobs crisis and subversion of social equilibrium through religious polemics. Nadda, while continuing the existing party’s agenda, can do so subtly and use his newness to soothe anxieties through sensible outreach programmes. There are parts to Nadda that the BJP can use smartly to change perceptions before the next round of general elections. A student leader, who has plodded his way up the ranks, he has a grasp on grassroots, having been in-charge of the BJP’s Lok Sabha campaign in Uttar Pradesh and the Maharashtra polls. He has to deliver Delhi and Bihar, the former quite a difficult challenge. But going by the speeches of the Modi-Shah duo at his anointment, it seemed the election of the BJP president was another missile aimed at the Congress which is yet to hold the most basic of organisational elections. Nadda may appear to be gifting BJP a “lit” moment but that will have little value if he is a cipher.