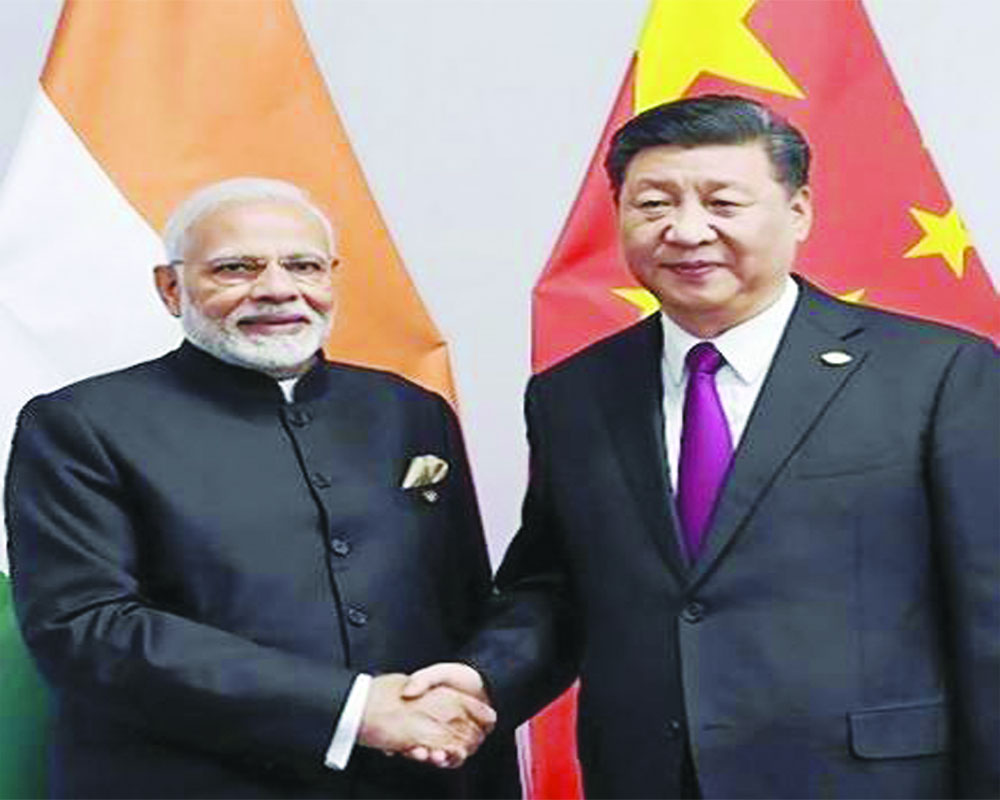 It is for Beijing to work out the cultural, economic and strategic damage of an Asian split. Or it could work for a larger Asian unity

The coming months are the time to tell Beijing that the occasion to settle our mutual issues and disputes is now. For its own sake. And it pays to work transactionally with India to stay relevant in a world that is rapidly turning against it. It must end lingering disputes or else sooner or later the American alliance would expand and tilt the scales for a unipolar world. On its part, India has been non-aligned and its leaders would prefer a multi-lateral world to continue. It should be a sad day if one Asian country drives another Asian nation into the arms of the West. It is for Beijing to balance the cultural, economic and strategic damage of an Asian split. Or it could work for a larger Asian unity. This is the time to act.

The external affairs situation is gearing itself into a remarkable opportunity for New Delhi to regain what we lost in 1962 and before. It is as if many a planet is positioning itself to assist India. It began with Chinese ruler Xi Jinping becoming highly ambitious, apparently wanting to make his Middle Kingdom the powerful pivot of the earth. Like Napoleon Bonaparte in 1804, Xi has crowned himself Emperor for life, although the world has changed a great deal over the last two centuries. Today any number of his colleagues would resent such a royal elevation and implicitly compel Xi to prove himself a great man every week. That pressure is hard to live up to.

The US has an unusually bold President; he has an election to win in less than three months from now. President Donald Trump has been waging a cold war with Beijing for quite a while. It has become colder of late and is likely to freeze further. He demonstrated in Texas earlier this year how much he likes Prime Minister Narendra Modi. Lately, he, along with his Secretary of State Mike Pompeo, has openly supported India in the context of Chinese border intrusions, although their main concern is Taiwan, a democratic island country off the southeast coast of China. It is an independent country but Beijing claims that China, Taiwan and Hong Kong-Macao are one country, three systems. The US has a defence treaty with Taiwan and cannot possibly allow the island country to be grabbed by China. Nevertheless, it is a matter of a “do or die” prestige issue for Beijing, especially in Asia. It will, therefore, be interesting to see how the issue will unfold.

According to its President, the US is likely to jettison the North Atlantic Treaty Organisation (NATO). This was an alliance to combat an invasion by the Soviet Union of western Europe. By 1991, the Soviet Union had broken up. So what is the rationale for NATO? Who should it defend and against whom? In any case, this should mainly be the responsibility of western Europe, not the US. If this were to happen, the US military budget would have a lot of money and troops to spare for Asia. Half the American troops stationed in Germany are already being transferred to Asia. After World War II ended in 1945, Germany and Japan were asked by the US and allies to scale down their military status. They were forbidden from letting their forces leave the shores of their countries for any military operations. In fact, for the first five years after WWII, these countries were not to have any military at all. They were to be protected by the US, with or without NATO. Germany remained conservative, saved money and produced its economic miracle. Japan was militarily a little more restless and began developing its navy, airforce and strengthening its army, even though slowly. In these 70 years, it has quietly modernised its navy and airforce, has built a helicopter-carrier and makes modern submarines. The present Prime Minister, Shinzo Abe, has worked hard to amend the Constitution and Japan can now send troops overseas. The more China developed, the greater was the Japanese intent to be militarily stronger; so also is the case with India over the last six years. Every action has a reaction.

Similarly, the people of Taiwan have been alerted, especially after trouble began in Hong Kong. Until the Xi Jinping regime passed a law that anyone arrested for wrongdoing in Hong Kong could be extradited to mainland China for being tried, these smaller places were relaxed. This new Chinese law, Hong Kongers rightly feel, is a violation of Beijing’s commitment of 1997, when the British left, of “one country two systems” whereby the mainland would not interfere in island, which is also a big revenue earner. Popular protest spilled over to the streets where even American flags were flown, provoking great anger in Beijing. These continual agitations have further alerted the Taiwanese and new President Tsai Ing Wen is committed to complete independence and a deeper cooperation in the neighbourhood, which infuriates Beijing no end. The US is defending Taiwan’s freedom to demonstrate its seriousness; very recently a Secretary of the Trump government has visited Taipei as a show of support. India under Prime Minister Modi has appointed an envoy to Taiwan, following the Ladakh clashes.

More distant countries, whether in Europe or South America, have got resentful of China for suppressing facts about the Wuhan contagion. The international wind is blowing against the Dragon.

The Islamic countries may not speak up but are upset at how Beijing is treating Muslims in its country, especially those living in Xinjiang, which was once an independent East Turkestan. After the Red revolution and Mao Zedong coming to power in 1950, some 28 leading politicians of this country were invited to Beijing (then Peking). The stated purpose was to meet fraternal leaders and discuss issues of mutual interest. Since the Uygurs had no means of travel, a special plane was sent to the capital Ürümqi. After the conference and get-together, the same aircraft that was taking the Turkish leaders back, crashed. All Uygur leaders were killed except two communists who had opted out at the last moment feigning sickness. They took over the government of East Turkestan and soon merged it with the rest of China.

The Sino-Japanese relations have an uneven history. For example, Manchuria was a colonial province of Japan between 1932 and 1945. As a result of World War II, it was ceded to China. Over the many decades, especially after its naval victory over Russia in 1905, Japan had considered the Pacific Ocean more as its own than anyone else’s. Lately, China has been spreading its wings over the South China Sea, which is objected to by several powers, including Japan as well as the US. Beijing has built an island in its midst, provoking Australia, India, Japan and the US, which have deployed their navies to conduct exercises in the high seas. The current bone of contention happens to be the Senkaku Islands, a group of uninhabited islands. Except for the US administering them between 1945 and 1972, as part of the Ryukyu Islands, the archipelago has been controlled by Japan since 1895. The People’s of Republic of China (PRC) started talking of the sovereignty over the islands in the latter half of 1970 when evidence relating to the existence of oil reserves surfaced.

Additionally, after claiming large portions of the South China Sea as well as Mt Everest, two Chinese websites have been claiming that central Asian countries like Kyrgystan and Kazakhstan have been parts of China and with the latter even eager to “return” to China. According to the latest Chinese territorial claims on others’ territories, under the Khan dynasty, a total of 510,000 square kilometres of Kyrgystan, or the entire country, was part of China but was later overrun by the Russian empire.

It is well known that China is over populated and land-hungry. In the bargain, the People’s Liberation Army had tried to cross the Ussuri river and into Russian territory in 1969. The vast area of Russian Asia has comparatively few people and is, therefore, a perpetual temptation for the Chinese to occupy. Beijing has few friends for fear of what it is and what it could desire. North Korea and Pakistan are the only obviously perceptible allies.