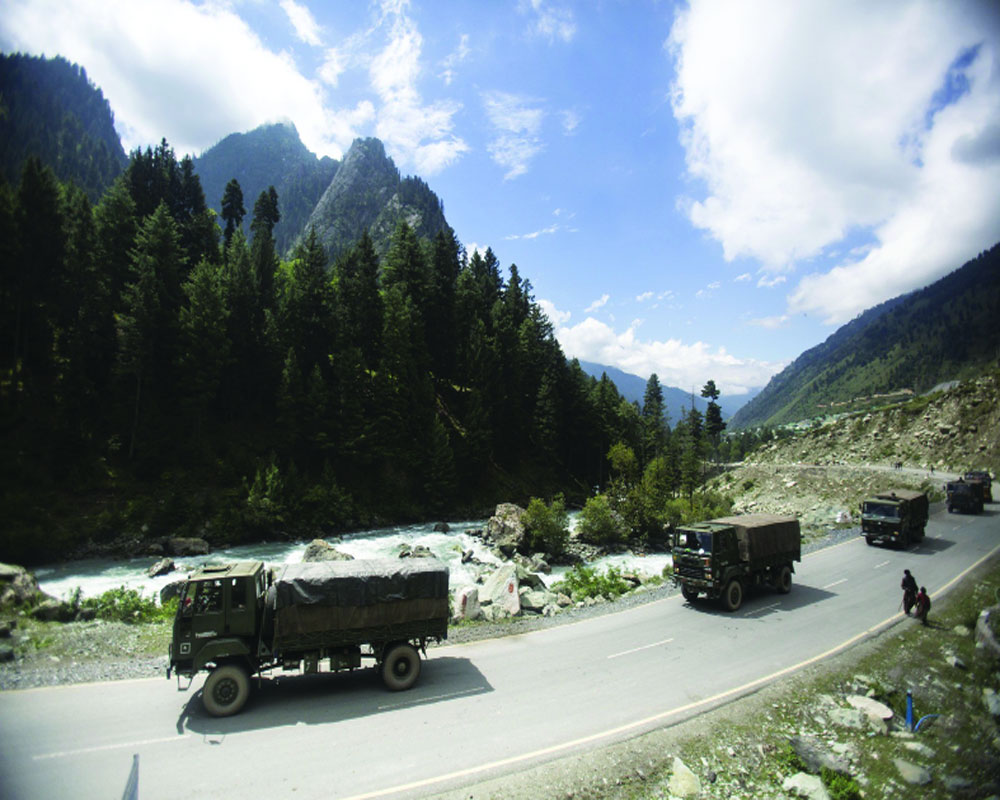 After a hiatus of seven weeks, the India-China disengagement and de-escalation process (DDP) resumed on Monday in a revised military-diplomatic format. To recap, in April-May, the People’s Liberation Army (PLA) presented India with a fait accompli through multiple intrusions across LAC, annexing 1,000 sq km of territory following intelligence and operational lapses of Himalayan heights. China built up 40,000 troops with matching deployment by India and preliminary conversations on a DDP culminated in the Galwan clash, which led to further mobilisation of troops. The China-dictated DDP disadvantaged Indian forces, locking them in buffer zones and blocking their patrolling in Galwan, Hot Springs-Goghra, Depsang and Pangong Lake areas. An Indian riposte came south and north of Pangong Lake on Kailash ridge centred around Mukhpari through a preemptive operation by the Special Frontier Force, comprising exiled Tibetans, and local action in the Fingers area. This unnerved PLA,  which created a friction point near Mukhpari prior to the anodyne five-point Moscow agreement between Chinese and Indian Foreign Ministers. Few days earlier, the two Defence Ministers had conversed at the same platform. Two thresholds — unarmed combat resulting in casualties and prophylactic firing — on the escalation ladder have been crossed for the first time in 45 years.

Speaking in both Houses of Parliament on the situation along the LAC, Defence Minister Rajnath Singh skipped specifying statistics of PLA ingress. In fact, he was less than economical with the truth by suggesting that coordinated intelligence and border troops’ action thwarted aggression which he referred to as transgression when it was clearly a case of intrusion. In fact, the Ministry of Defence had put out the details of intrusions on its website but mysteriously removed them.

Prime Minister Narendra Modi’s epic statement on June 19 that no Chinese troops intruded or were on Indian soil was the original sin which became the Holy Grail for Beijing. Singh replied rhetorically to Indian troops in lockdown being prevented from patrolling by PLA. What was also missing from his statement was any reference to restoration of status quo ante (RSQA) and Depsang, the deepest and strategically most unbalancing of all intrusions. It was Singh who first spilled the beans on intrusions and later admitted he could not guarantee a favourable outcome from military commanders’ talks. He was spot on as DDP had virtually collapsed by August 2, the last date of talks.

India’s negotiating strategy has serious lacunae. Further, in the statements issued by each side, China has never mentioned RSQA but restoring peace and tranquility in border areas. The word LAC has also never been used. Curiously, the Indian side has also not used RSQA in formal statements but called for full and complete disengagement. Mention of Depsang has become taboo. China has violated all border protocols, especially the 1993 and 1996 agreements, and changed the concept of LAC since it is neither delimited nor delineated. It has made LAC irrelevant, turning it into the line it can occupy and control. Instead, it has promulgated the November 1959 claim line shifting LAC  westwards. As the stronger power, it has exploited the undefined LAC for exercising coercive diplomacy. China’s Global Times has repeatedly said that India must accept the 1959 claim line or else face war.

Before the Foreign Ministers’ Moscow meeting, the PLA attempted to unhinge India’s seizure of Chushul heights,  including several nodal points on the 30-km Kailash ridge line dominating PLA Moldo garrison and Spanggur Gap. These dominating heights are on the Indian side of LAC and not a trespass as alleged by China. PLA manufactured a friction point on a plateau roughly

300 m away and 200 m lower, near Mukhpari, one of the highest points on the ridge. It is surprising why the Special Frontier Force (SFF) did not occupy this plateau. During the ongoing talks, Mukhpari has already become the new bone of contention in DDP.

Even with the dust not settling on the plateaus of east Ladakh for over five months now, it is possible to decipher more rationally the Chinese motivation for its well-planned military occupation of Indian territory. It is now flatly refusing to disengage and abandon military gains like it did after past intrusions — Sumdorong Chu (1986), Depsang (2013), Chumar (2014) and Doklam (2017). India is still relying on China eventually withdrawing and returning to barracks.

It seems China was incensed when Indian troops trespassed border at Doklam (disputed between China and Bhutan) and blocked PLA from building a road towards the disputed India-Bhutan-China trijunction in Chumbi Valley. China compared Indian belligerence to “if you go to steal chicken, you may lose the rice bowl” and took Indian audacity as daring China. The Chinese media had then noted that Beijing was looking for an opportunity to humiliate India.

Two other compulsions can be added to the Doklam-dare — Home Minister Amit Shah’s parliamentary pledge to liberate Aksai Chin and President Xi Jinping’s realisation of the China Dream.

India must frustrate Xi’s dream of reviving the mythical  India-China border of the Ming dynasty and strive for a fair and mutually acceptable border settlement. This appears to be problematic due to asymmetries in gross national power. China has already imposed costs by forcing the Indian Army to deploy three additional divisions ahead of its high altitude defences in Ladakh along LAC.

It seems prepared to press on its claims and deployments in a game of blink. It has mobilised four out of its five Theatre Commands to grapple with inimical fronts in East China Sea, South China Sea, Taiwan and the Xinjiang and Tibet borders facing India. It will be unwise to underestimate the staying power of PLA — either its capacity to fight in high mountains or the need for it to employ troops in the ratio of 6:1 to dislodge Indian soldiers occupying heights.

But China has no intention of starting a conflict. It is the satisfied power, having already made territorial gains. India has said it will respond to aggression in self-defence, despite Chief of Defence Staff (CDS) General Bipin Rawat’s threat of the military option if diplomacy fails. One scenario from the DDP is PLA agreeing to withdraw to original positions from most friction points except Depsang with Indian forces vacating their commanding Chushul heights as quid pro quo. A full RSQA, still unlikely, could result only from a possible third Xi-Modi summit on the sidelines of the G20 at Riyadh in November. Otherwise, the standoff could go the long Sumdorong Chu way of eight winters unless Xi is persuaded to temper his Ladakh dream.