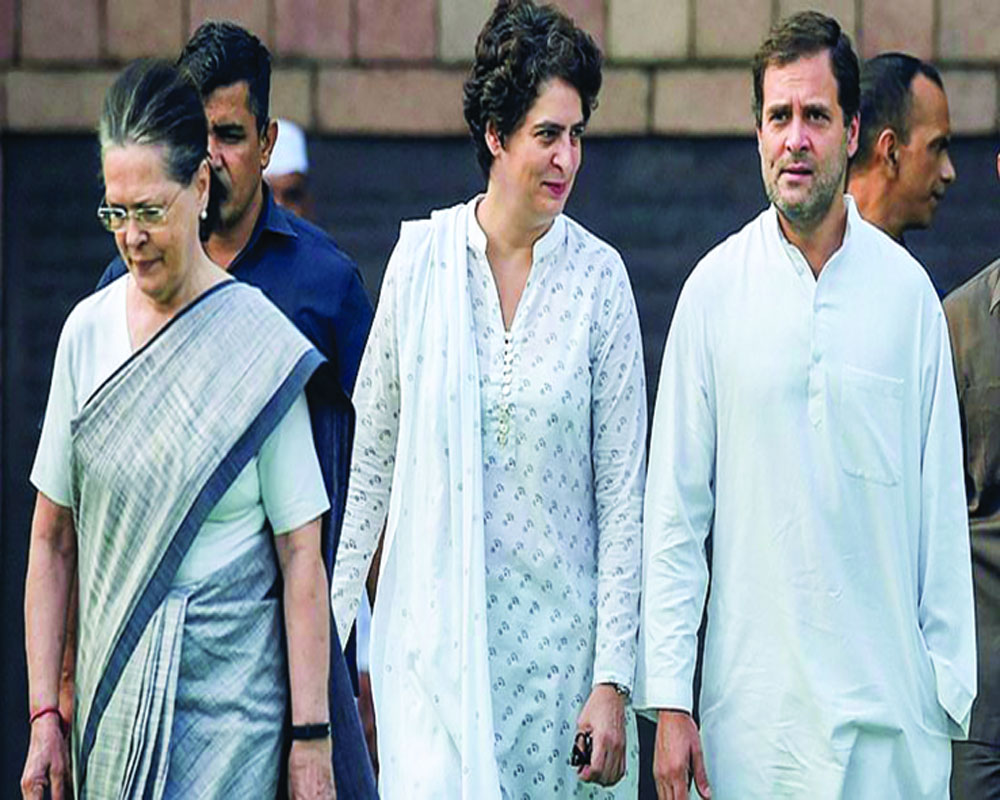 A split in the Congress party seems inevitable. Despite formal genuflections before the Rae Bareli MP, Sonia Gandhi is now only an interim president and neither offspring is acceptable as future president. Indeed, the Congress Working Committee (CWC) meeting of August 24, 2020, called to address an explosive letter by 23 top leaders, could not quash the dissent. The shareholders announced that the Congress will not be allowed to run like a family firm.

Far from urging the Wayanad MP to return to the helm, the seven-hour debate declared temporary status quo over interim president. The Gandhi family exposed its reluctance to relinquish control of the party but could not deflect the charge that is has lost appeal with voters. The process of electing a non-Gandhi president may trigger a split as the Gandhis will not work with, or under, a non-protégé.

The situation is vastly different from May 1999 when Sharad Pawar, PA Sangma and Tariq Anwar questioned Sonia Gandhi’s foreign origins and her plan to stake claim to the Prime Minister’s office without discussion within the party. Although the trio quit, their contention that a foreigner would not be able to head a coalition was vindicated when Gandhi selected Manmohan Singh in 2004. For a decade, she wielded enormous power over the Government via her unelected National Advisory Council, but Narendra Modi’s victory in 2014 and 2019 convinced even die-hard loyalists that the present leadership is a political liability. Rahul Gandhi’s flight to Wayanad, Kerala, and Priyanka Gandhi’s failure to make a dent in Uttar Pradesh exposed the futility of banking on non-charismatic heirs. Even Rahul Gandhi’s re-election from Wayanad seems difficult in 2024.

Having spoken up because of the Congress’s descent to electoral irrelevance, the veterans will not tolerate the imposition of effete leaders (read Manmohan Singh or AK Antony). They are demanding elections to the CWC and the party’s parliamentary board. There is anger that the party is run by a tiny coterie comprising the Gandhi family, general secretary KC Venugopal and national spokesperson Randeep Surjewala. The unilateral appointments of Adhir Ranjan Chowdhury (leader, Lok Sabha), Ajay Maken (general secretary, Rajasthan in-charge), Rajya Sabha nomination for Mallikarjun Kharge and Hardik Patel as working president of the Gujarat unit shocked the rank and file.

Former spokesperson Sanjay Jha, whose analyses of the rot in the party brought the crisis into the open, tweeted that under Art 18 (H) of the party constitution, “only a freshly elected AICC can elect the next Congress President. The CWC has already discharged its responsibilities by appointing an Interim Congress President last year.”

As the veterans reiterated their concerns in the media, Sonia Gandhi opted for confrontation. On August 27, former Union Minister Jairam Ramesh was appointed chief whip (Rajya Sabha), Gaurav Gogoi deputy leader and Ravneet Singh Bittu whip (Lok Sabha), sidelining seniors like Shashi Tharoor and Manish Tewari. The inclusion of Ahmad Patel and KC Venugopal in the 10-member committee appointed to decide the party’s stand on key issues in Parliament was a snub to veterans like Ghulam Nabi Azad and Anand Sharma. Now the battle is joined and there is no going back for either side.

Sonia Gandhi must have been enraged by the demand for unity with Opposition parties headed by those who had left the Congress in the past. This obviously alludes to a certain strongman whom some believe has choreographed the current revolt. If true, this suggests that the epistle was planned with leaders outside Congress, with the aim of dislodging the once unchallengeable Gandhis.

At the CWC, the Gandhi siblings antagonised the seniors instead of discussing the issues raised by them. The Wayanad MP said the letter was sent to Sonia Gandhi at a time when she was unwell and the “party is fighting the Bharatiya Janata Party (BJP) in Madhya Pradesh and Rajasthan”. This false emotionalism reflected lack of political gravitas. Moreover, the BJP had seized Madhya Pradesh in March itself and Chief Minister Ashok Gehlot had saved his government by August 7, when the letter was written.

Worse, Rahul Gandhi accused the seniors of penning the missive in collusion with the ruling BJP. Taken aback, Ghulam Nabi Azad, leader of Opposition, Rajya Sabha, offered to resign his post if he was “in any manner doing this to help the BJP or doing it at its behest”, only to be rebuked by Priyanka Vadra. “What you are saying is opposite of what you have written,” she countered. Later, former Union minister and senior advocate Kapil Sibal said he had defended the party in the Rajasthan High Court and helped it bring down the BJP government in Manipur, and yet “we are colluding with the BJP.” The sharp and articulate Sibal has become the face of the dissidents.

Currently, the strongest support for Gandhi leadership comes from Punjab Chief Minister Amarinder Singh (who needs them against rival Partap Singh Bajwa), former Prime Minister Manmohan Singh (who has never fought an election in his life), and former Union minister AK Antony (who cannot bring Kerala back to the Congress kitty). Madhya Pradesh stalwart Kamal Nath has been silent; he could emerge as the rebels’ choice of leader.

Few of them have an assured electoral base. But the issues they have raised are a political audit of the leadership and suggest wider consultations within and outside the Congress. The high command is being held responsible for the party’s downfall in State after State. The demand for collective leadership is an indictment of the opaque micro-management that has distanced the leadership from the party and public opinion on a range of issues. The quest for an “effective” leader suggests the compulsory retirement of the reigning dynasty – a bloodless coup.

(The author is a senior journalist. Views are personal.)