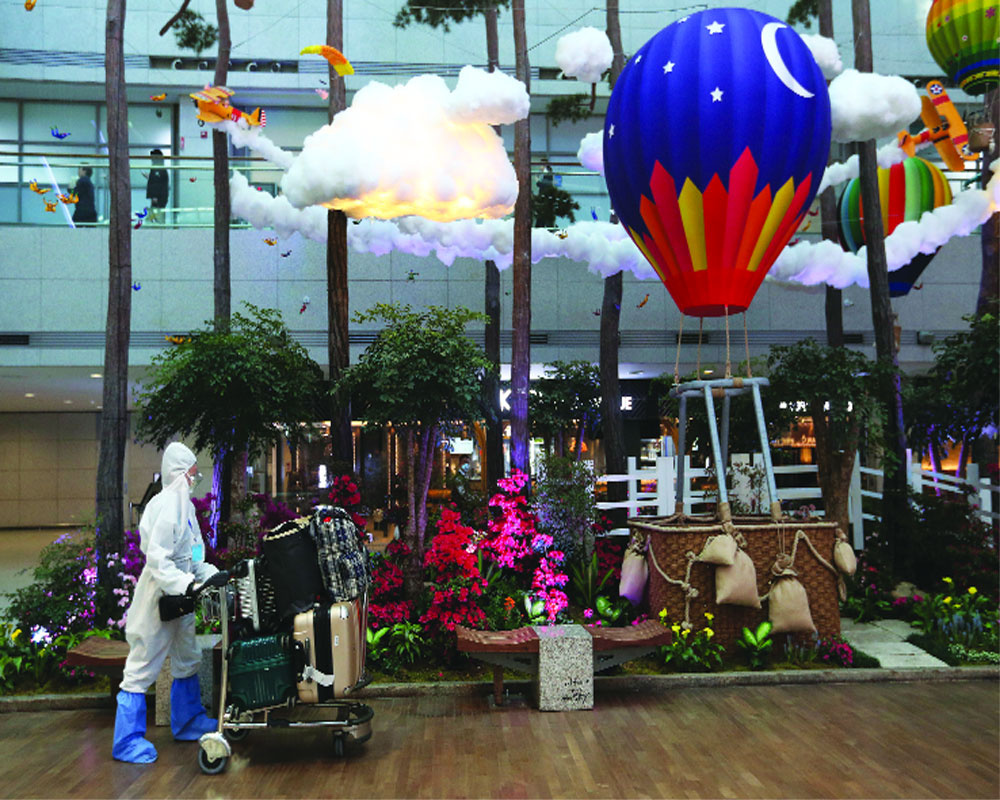 The mysterious Christian sect termed the viral infection as weakness. What has irked many South Koreans is Shincheonji sect leader Lee Man-hee’s earlier claim that COVID-19 has been caused by evil spirits jealous of the rise of his faith

South Korea initially emerged as one of the potential hotbeds of coronavirus (COVID-19) along with China, Italy, Iran. The Shincheonji Sect, a mysterious Christian religious group, has played a vital role in fast spreading the virus across South Korea. When the cases of coronavirus spiralled in the country, the scientists discovered the common source of its origin: the much talked-about Shincheonji Sect, to which more than three-fifths of the victims belong. And it is based mainly in Daegu, the fourth largest city of South Korea. What has shocked the Korean authorities and the global health experts is that the unique style of congregation of Shincheonji may have catapulted the virus outbreak to the current alarming situation in the country. Its followers are supposed to kneel on the floor in close rows while praying, not allowed to wear masks (until recently) and encourage attending the church even when unwell.

In the month of February, a female follower who later tested positive for the virus was among the first to be infected as per the information provided by the South Korean health officials. In fact, this woman’s refusal to undergo examination despite attending several church gatherings may have helped spreading the virus. This has signaled that Daegu, the southern city of the country, wherein the major activities of the sect take place, is responsible for the fast growth of the COVID-19 in South Korea. Also what has alerted the authorities is that it is quite common among its disciples to hide their identities in public. The faith itself has categorised “sickness” as weakness. These all may have allowed or rather forced the infected followers not come out in public. This can be considered as too dangerous looking at how fast the disease has travelled from faraway Wuhan to different parts of the world.

The Shincheonji cult was formed by Lee Man-hee in 1984. Many say this apocalyptic Christian group is a cult. The very origin of the sect lies in the Book of Revelation. In the Korean language, the word Shincheonji refers to “New Heaven and Earth”. Its official name is “Shincheonji Church of Jesus, the Temple of the Tabernacle of the Testimony. For all the believers, it is no other than Lee who is the one around whom their lives revolve. They address him as “Chairman Lee” or at times simply the “Chairman”. But in prominent Church literatures, he is referred to as “Promised Pastor”, “The Advocate” and finally, “The One Who Overcomes”.

It has lakhs of followers who generally keep their identities dormant in public places. The founder identifies himself as the “Promised Pastor” mentioned in the Bible. But what his critics say is that he is simply peddling Christian heresay. It is interesting to note that the cardinal principles of the faith say that the followers of the faith are the embodiment of the one true Christianity and pose for salvation when the moment of final judgment comes. All of them strongly believe that everyone else will be denied forgiveness and destroyed. To this sect, the end of the world is just near. Once we browse through the recent history of South Korea, we can easily locate such religious movements, sects or faiths that have quite often appeared and influenced a significant part of its society. Interestingly, Lee has been having long experience in such controversial movements that have quite often appeared in South Korea. Hence such religious revivalist movements are nothing new in this country. In fact, the Shincheonji has emerged from the ruins of earlier Tent Temple Movement that fell apart in the 1970s after its leader was accused of massive fraud. Even little before that there was another such revivalist religion called Olive Tree Movement that too brought millions together across South Korea. Such new religious movements though are on the fringe, they play significant roles in mobilising people and shaping opinions the way they feel right. And many a times the leaders of such cults are questioned, tried and even prosecuted as per the law of the land.

What is the current position of the sect and reaction of the common people over it? Since COVID-19 as global pandemic has already infected over 2,76,000 people and killed 11,419 (till March 21) globally, including 8,800 cases and 102 deaths in South Korean, people in the country are annoyed with the Shencheonji church. What has irked many is that initially its leader Lee squarely blamed the COVID-19 on evil spirits that are purely jealous of the rise of his faith. But very recently, he came out openly in public apologising for his church’s role in the outbreak of the virus in the country. He also offered all his support in checking the disease.

Meanwhile people are demanding the dissolution of the sect in no time. Thus, the Shencheonji has become the nerve centre of the nationwide invective as the COVID-19 is showing no signs of receding around the world. Again more than 5,52,000 Koreans have signed an online petition demanding quick action against the church. Along with this, many politicians are coming up against the Shencheonji and the way it has helped spreading the menace. The Mayor of Seoul demanded the prosecutors to investigate Lee for murder on the charges of negligence.

It is an unusual kind of a crisis that South Korea has experienced. But there is resigned acceptance among the people. Many feel that their health system is robust enough to gear up to counter such epidemics. Medics and health experts are on standby duty across the country. And the weekly briefings at least twice daily from the Centre for Disease Control not only alerts people but also helps the experts to track each infected person. Despite that, unlike Hong Kong and Singapore, there is no such panic prevailing in South Korea about COVID-19.

Unlike China, the epicentre of coronavirus outbreak, South Korea has not adhered to total lockdowns or any other authoritarian measures to control the epidemic. Many health experts in the country feel that as it’s a democratic country total lockdown is not a reasonable choice for it. Though there is no astronomical rise in cases, the authorities in the country are not denying that there may be a resurgence of COVID-19. However there is hope due to the implementation of wide ranging and well-organised testing of the infected persons in the country. Accompanying such efforts is the complete isolation of the victims and trace and quarantine their contacts. So far South Korea has conducted 2,70,000 tests, that comes to 5,200 tests every million people. But when it comes to the US, it has so far carried out 74 tests per one million people as the data revealed by the Centre for Disease Control and Prevention points out.

Any epidemic of such nature can be effectively controlled only by fast diagnosing the cases or infected people. And tracing the contact of the affected people and their immediate isolation could act as bulwark in preventing any such spike. Also the health experts have taken enough effort to investigate the cases related to Shincheonji mega church and equally quarantining the infected ones in the Daegu city. However concentrating on the Shincheonji for a long time has literally poured the entire energy of the Government behind it. And it has allowed new clusters of COVID-19 appear in Seoul and its surrounding areas such as Gyeonggi province. Now this needs to be urgently addressed by the epidemic experts.

Finally, what has made South Korea learn their lesson to hard hit such crisis is the experience of handling of MERS (Middle East Respiratory Syndrome) in 2015. This happened when a South Korean businessman was infected with MERS after visiting three West Asian nations in that same year. He was treated in three hospitals but in the process infection spread, killing 36, and isolating nearly 17,000 people before coming to stop in two months. That epidemic had forced the South Korean Government to pass strict laws that gave enough power to the officials to collect mobiles, credit cards and other data from those who tested positive to map their whereabouts. This information barring their identities shared in social media have helped others to track virus affected or their own contact with such people. Most importantly, once China witnessed the outbreak of the COVID-19, the Korea Centre for Disease Control and Prevention started developing its tests and planned its complete cooperation with the diagnostic manufacturers to make the commercial kits for testing. This all seriously have contributed to prevention and substantial control of the COVID-19 in South Korea.