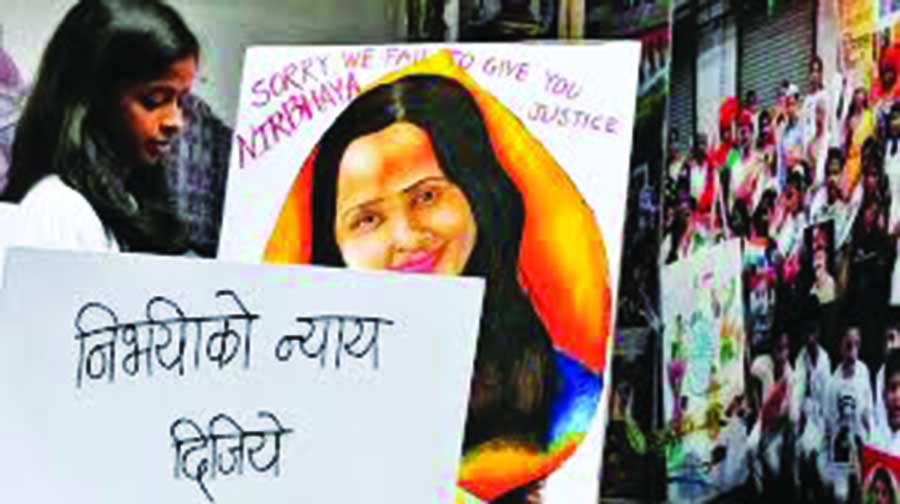 As the hanging of Nirbhaya’s rapists gets stalled, we must ask if we can get real about women’s safety or just float a bogey

All concerns and campaigns for women’s safety sound vacuous and patronising when the commitment to it, by virtue of honouring and implementing the law, falters. We lose faith in a system that is exploited routinely and remains imprisoned in a maze of technicalities to deny closure. Even if it is as gruesome and indelible a case as that of the rape of Nirbhaya, which has taken seven long years to be taken to its logical end and is still stopping short of answering to our national conscience. Worse, the system is oblivious and impervious to what this travesty means to women in general and to Nirbhaya’s family and friends in particular. Now, the hanging of the four rapists, convicted for one of the most heinous of crimes in India, has been stalled due to procedural drags, simply because all the convicts need to be given time to file mercy pleas and each of them would have to be heard following due processes. This should have been initiated earlier given the Supreme Court’s ruling and clarity on the death sentence in a case considered “rarest of rare.” So a case which ushered in special laws, a fast-track mechanism and well-intended course correction is now being denied the same privileges. Yes, due processes of law have been followed but the undue stress caused by delays in punishing the offenders is the reason that people talk about overriding the system with vigilantism. In the end, women lose confidence in society at large, whose mindset is set by precedents and examples, and predators are emboldened simply because they think they can get by. Considered a cut-and-dry case, the Nirbhaya verdict should not have been long in coming but it took four-and-a-half years for the trial court, the High Court and the Supreme Court to pass their judgments, with the lawyers of the convicts using every trick in the book to delay the inevitable.  As per the law, once the apex court handed out the death sentence on May 5, 2017, the four convicts should have filed a review petition within 30 days, but the men exploited a legal provision for condonation of the delay if the convict gives a convincing reason. Hence all four filed their review petitions at different times after long, deliberate delays, in their bid to thwart the justice system. Under prison rules, if death sentence has been handed out to more than one person in a case and if even one of them moves a mercy plea, the execution of the others, too, has to be postponed till the plea is decided. Hence, as one of the four convicts, Mukesh Kumar, has a mercy petition pending before the President, all cannot be hanged. What is appalling is that these oversights have been made by responsible arms of the administration, in this case the Delhi Government and prison authorities. The Delhi High Court, therefore, slammed the Delhi Government for sitting on the case for a year and not issuing a notice on the mercy plea to convicts. The court also castigated the Delhi prison authorities for not informing the convicts that they could move mercy pleas before the President. This is not the first time that the convicts have exploited loopholes to thwart justice. Right from false alibis, to buying time by getting pages and pages of trial court proceedings translated from English to Hindi, they have done it all.

No wonder then that in a country where the conviction rates for rapes are as low as 32.2 per cent, despite laws dealing with sexual assault being made stringent in the aftermath of the incident, crimes against women have been on the rise. They have spiralled from 329,243 cases in 2015 to 338,954 in 2016 and 359,849 in 2017. From 2013 onwards, over 30,000 women/girls have been raped. That there is no seriousness about building in deterrence is revealed by a dismal 11 per cent utilisation of the Nirbhaya Fund allocated to States/Union Territories for ensuring the safety and security of women/girls. Any reform — police, judicial, infrastructural — will have no meaning till we reform the attitude towards law enforcement, implement it instead of negating it. Of course, there is the monster of politicisation even in tragedy. The BJP promptly blamed the AAP Government for delaying notices to convicts considering the  Supreme Court rejected the appeal against their death sentence in 2017. AAP claimed that while the Delhi Government’s recommendation was swift, the Centre had been in hibernation mode. While the point-scoring over who pushed Nirbhaya’s rights rages on, what both forget is that each had agency and powers to do what could have been done in days, not years. Both, as representatives of people, look emaciated by the criminals who help them keep their talk points rolling. After all, there is no political capital to be made out of Nirbhaya’s deathly silence.