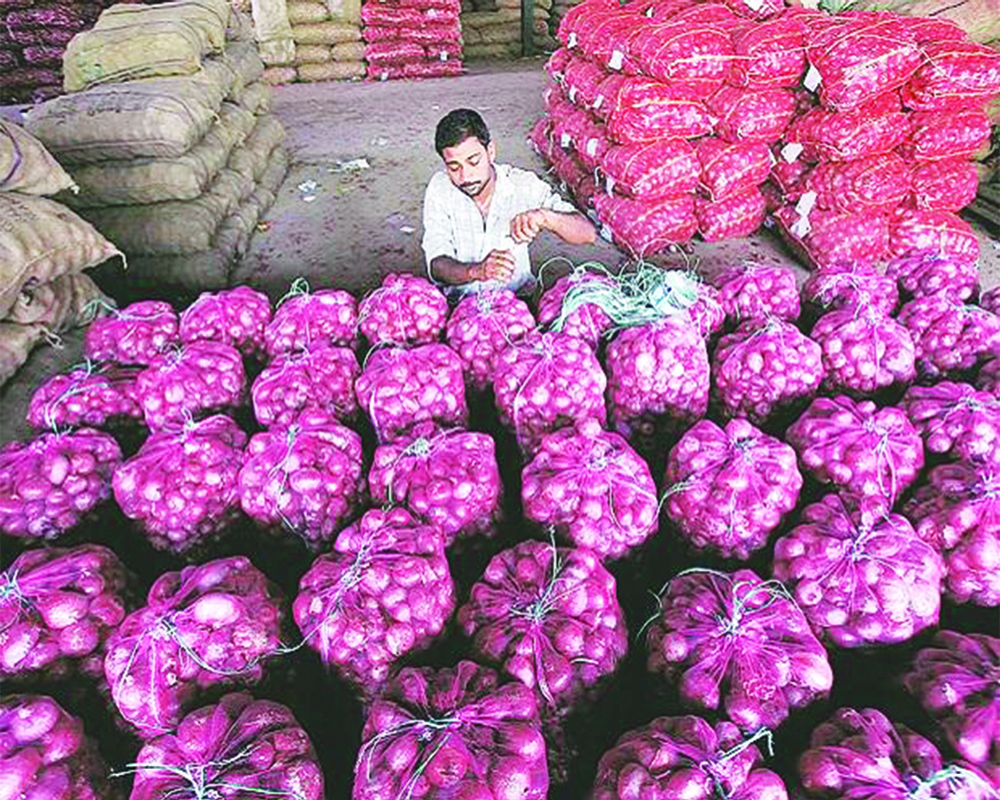 Free markets with the right infrastructure, better price forecasting tools and dissemination of price information will deliver a permanent solution to our woes over the kitchen staple

In response to the exponential hike in onion prices in the mandis (wholesale fruit and vegetable bazaars) and retail markets, the Union Government reintroduced stock limits on October 23 on traders and wholesalers by invoking a provision of the newly-amended Essential Commodities Act of 1955. Before this, to ease rising prices, the Government had banned export of the bulb and relaxed import norms to increase the stocks available for retail trade.

Wide price fluctuations are a recurring problem in the country, with onion prices varying from Rs 10 to Rs 100 during the same year. In such a situation, the farmers and consumers lose while the traders and retailers gain. India produces around one-quarter of the global onion supply (second only to China) and exports about 10 per cent of its total output regularly. Onion is an indispensable staple in Indian kitchens and as it has no substitute, prices are sensitive to supply.

The yearly consumption of onion in India is about 160 lakh tonnes and between harvests, stored onion is released into retail markets.  However, given its perishable nature, it cannot be stored beyond four to six months as it begins to spoil after that. Storage losses are generally 30 to 40 per cent but this season losses are in the range of 50 to 60 per cent because of heavy rain. Thus, onion prices depend upon seasonal factors as they not only affect the standing crop but also damage the stored harvest.

Onion is mainly a Rabi crop (65 per cent of production). Sown in the month of December- January, it is harvested during April-May and sold at about Rs 10 per kg. A Kharif crop is sown in the month of May-June and harvested during the months of October and November. A late Kharif crop is sown in the months of August-September and harvested during January-February. A Rabi harvest is stable with better storage quality and used for about six months until October, when the arrival of the Kharif harvest starts. The main and recurring problem with the Kharif harvest is that it fluctuates widely and production falls below expectations unpredictably once in two years. If the harvest is below expectation, prices will skyrocket during the months of September and October. Hence, the retail prices of onions more than quadrupled between June and September in 2010, 2013, 2015, 2017, 2019 and now again this year. Last year, too, onion prices rose due to simultaneous damage to the standing crop in Karnataka as well as to the onion harvest stored in States like Maharashtra, Madhya Pradesh and Gujarat due to flooding.

Policy decisions, like a ban on exports and promoting sudden imports to bring down onion prices for the benefit of consumers, definitely hurt the farmers, who were hoping for better prices. They are of the opinion that when they bear the losses due to lower prices in a particular season, they have the right to reap the benefits of higher prices, too. Why should they bear the brunt both ways? In fact, farmers’ organisations complain that the Government favours consumers more than it does the farmers. It intervenes in the markets when the prices rise but does not protect the agriculturalists when the prices dip, although Government agencies do procure the produce above market rates during the harvest period.

Even if we keep the problems of the farmers aside, the fact remains that the knee-jerk reaction of an export ban diminishes India’s credibility as a reliable supplier or exporter in the international community. It will also go against investments in the supply chain of onion markets and importers may look for alternatives.

If the recently-passed three farm Acts are implemented in an effective way, these recurring problems could be avoided. Let us look at some alternative policies in the light of the recent farm reforms.

Price forecasting: The new farm Acts clearly emphasise the need to strengthen market intelligence to track price fluctuations. Onion prices are unpredictable, rising from Rs 10 per kg to Rs 100 per kg within a short span of three to four months, sometimes even weeks. A localised flood during the harvest period increases the prices by three to four-fold. Hence, there is a need for strengthening price forecasting systems based on agro-meteorological data to inform farmers in onion-growing areas about taking optimal decisions regarding acreage, storage and marketing. This information system will help traders transport the produce from low price areas to high price ones. It will   enable them to take decisions like storing the produce while the price is low and selling it when the price is high. This will help in stabilising prices across space and time.

Open market: Onion production is concentrated in only a few districts of Maharashtra, Madhya Pradesh, Gujarat and Karnataka. In these districts, only a few traders in the Agricultural Produce Market Committee (APMC) mandis handle a huge quantity of the bulb, with possible cartel formation to buy at lower prices from farmers and sell at higher prices to consumers to reap oligopolistic profits. There is a need to break these cartels by encouraging the participation of private traders outside the APMC mandis so that the harvest can be sold to multiple players, including cooperatives, farmer producer organisation (FPOs) and direct farmer-to-consumer channels. This will inject competition in a highly closed system and deter cartel formation among traders.

Eliminate layers of middlemen: Before an onion stock can go from the farm gate to the consumer, it has to pass through as many as four layers of intermediaries. The onions have to be loaded, repacked and sorted between each of these middlemen and all of them take their share of the profit margin, which increases the retail price for the consumers. Besides multiple fees, more intermediaries mean an increase in the manual handling of the onions, which results in them rotting before they reach consumers. This can be avoided through contract farming or by forming FPOs of growers. In the case of onion farmers, it is easy to engage in contract farming as they are geographically concentrated and have the common purpose of getting higher prices.

Storage and processing: The Rabi harvest (arrivals in April-May) is stored in hessian bags and ventilated structures without any temperature and humidity control. These onions are sold in phases, up to September, depending upon the need and prices. Usually prices spike after the sale of all the onions stored after the Rabi harvest in September and October. With better price forecasting and adjustment of acreage and storage decisions, prices can be smoothened during this period. Further, there is a need for encouraging trade in dehydrated onion during price spikes, especially for bulk users like hotels.

Procurement and distribution policy: In 2019, the National Agricultural Cooperative Marketing Federation of India Limited (NAFED) procured 50,000 tonnes of onion during the peak market arrival months of April-May at about Rs 10 per kg and offloaded it at Rs 23.90 per kg during September-October. This was done under the Price Stability Fund (PSF) scheme of the Central Government to keep prices stable and tackle the scarcity of the bulb. Timely procurement and offloading based on price forecasting models may reduce price fluctuations. However, the size of the procurement has to be increased from the current low level of only one per cent of the domestic markets to at least 10 per cent, to have a significant impact on price stability.

Open trade policy: The current policy of highly-regulated trade in onions, especially imports, needs to change in the spirit of the new farm Acts. In such a regulated environment, there are always time lags between sensing shortages, allowing imports and actual imports arriving in the retail markets. This always leads to higher price fluctuations. The best way of securing the interest of both the farmers and the consumers is through an optimal mix of acreage allocation, buffer stocks and free trade regime. This must be backed up by scientific price forecasting models.

Onion is so vital in the Indian household and the domestic market that its price has become a yardstick for Government price policy performance. Free markets with the right infrastructure, better price forecasting tools and dissemination of price information will deliver a permanent solution to our onion woes.