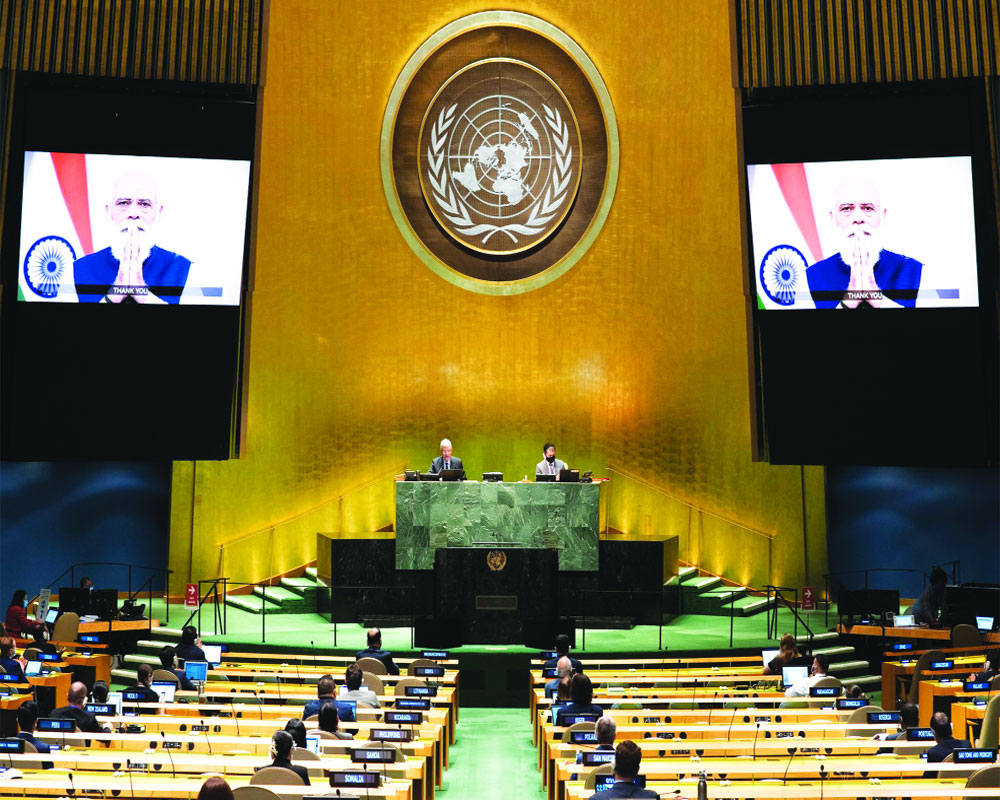 Addressing the historic 75th session of the United Nations General Assembly (UNGA) recently, Prime Minister Narendra Modi yet again made a forceful plea for reforming this international body and making the UN Security Council (UNSC) more representative and balanced. Modi had flagged this issue six years ago when he addressed the UNGA for the first time as India’s Prime Minister in September 2014. On that occasion, he told the member countries that no one country or group of countries can determine the course of the world. There has to be a genuine international partnership. This is not just a moral position but a practical reality and these efforts should begin with the UN. “We must reform the United Nations, including the Security Council, and make it more democratic and participative”, or else it could “face the risk of irrelevance” if it remained resistant to change. The Prime Minister was obviously emphasising India’s right to be a permanent member of the UNSC, a status enjoyed by the P-5 — US, UK, France, Russia and China — who are also armed with extraordinary veto powers.

He returned to this theme once again when he addressed the UNGA last month. Referring to the circumstances prevailing in 1945 when the UN came into being, he told his audience that members were now in a completely different era — the 21st century. Therefore, the international community must ask itself whether the character of the institution, constituted in 1945, was relevant even today? He spoke of the regard that the people of India have for the UN and said they wonder whether the reform process will ever reach its logical conclusion. “For how long will India be kept out of the decision-making structures of the United Nations?...When we were strong, we did not trouble the world; when we were weak, we did not become a burden on the world. How long will such a country have to wait?”

The Prime Minister was echoing the sentiments of 1.35 billion citizens of the country when he hinted that India’s patience was running thin. Indians find it difficult to fathom why their country is kept out, especially when it has such strong credentials. It is the world’s largest and most vibrant democracy with 911 million electors, of whom over 600 million exercised their franchise in 2019. It is also the most diverse nation in the world with unparalleled ethnic, cultural and linguistic diversity and home to all the major religions in the world. Indians speak 121 languages and 270 dialects. Further, India accounts for 18 per cent of the global population and will overtake China and become the most populous nation by 2027. Add to this its economic and military strength — it is the fifth-largest economy and one of the top five military powers in the world. Finally, it is a founding member of the UN, one of the 26 signatories at the first conference in 1942 and has made a phenomenal contribution to the organisation’s peace-keeping efforts across the world. Are these not enough reasons for India to be a permanent member of the UNSC?

As proud citizens of the world’s largest and most vibrant democracy, Indians also have the right to demand that the UN remain faithful to its own fundamental postulates. Is it not strange that the Preamble to the Charter of the United Nations reaffirms faith “in the equal rights of men and women and of nations large and small…” and yet, actively promotes a hierarchy of nations and consequently, of human beings? How can India, which has equality as a fundamental precept in its Constitution, accept this form of graded membership?

Further, Article 2 of the Charter says the UN is based on the sovereign equality of all members. How is this achieved when a nation with almost one-fifth of the global population is not a permanent member of the UNSC whereas two European nations — UK (67 million) and France (65 million), each with a population equivalent to just one of India’s 28 states (Karnataka) — are permanent members of the UNSC?

Articles 108 and 109 of the UN Charter are also wholly undemocratic because even if two-thirds of the members of the UN agree to amend the Charter, any of the five permanent members of the UNSC can use its veto power to block the amendment. This is absolutely undemocratic and unworthy of being part of any civilised institution in the democratic world. Why should the world’s largest democracy put up with this?

These articles enable members of the P-5 to play politics and stonewall reform. That is why the efforts of the G-4 (India, Brazil, Japan and Germany) to support each other’s bid for a permanent seat in the UNSC have not thus far fructified.

The international community must understand that India’s patience, despite all its philosophical underpinnings, is not inexhaustible and that there is a new India emerging —  optimistic, self-confident and self-reliant (atmanirbhar). It is true that seven decades ago, given India’s economic plight after centuries of colonisation, it lacked the gumption to stand up and demand its rightful place. But that is not the India of today. This is not a tame India. This is a bold India. A billion-plus citizens of this nation are no longer willing to accept these inequities as part of their karma and reconcile themselves to the second-class status thrust on them 75 years ago.

India is shaking off the delusions of the past. It has shed its innocence and gullibility that was in full display during the “Hindi-Chini Bhai Bhai” days and has realised that it must become strong and resilient to promote peace in its neighbourhood and the world. The Chinese are getting a taste of this, and as the momentum picks up, other nations too will begin to sense it. This is irreversible. Having nudged his countrymen towards this new thinking, Modi is sensing the change. That is why he made a specific reference to the aspirations of the people vis-à-vis UN reform.

India will celebrate the 75th anniversary of its independence in 2022. The UN must use the occasion to redeem itself, acknowledge that democracy is the most civilised political system ever devised by man and invite India to the high table.