Erdogan’s dreams: Ataturk will turn in his grave

Erdogan’s dreams: Ataturk will turn in his grave 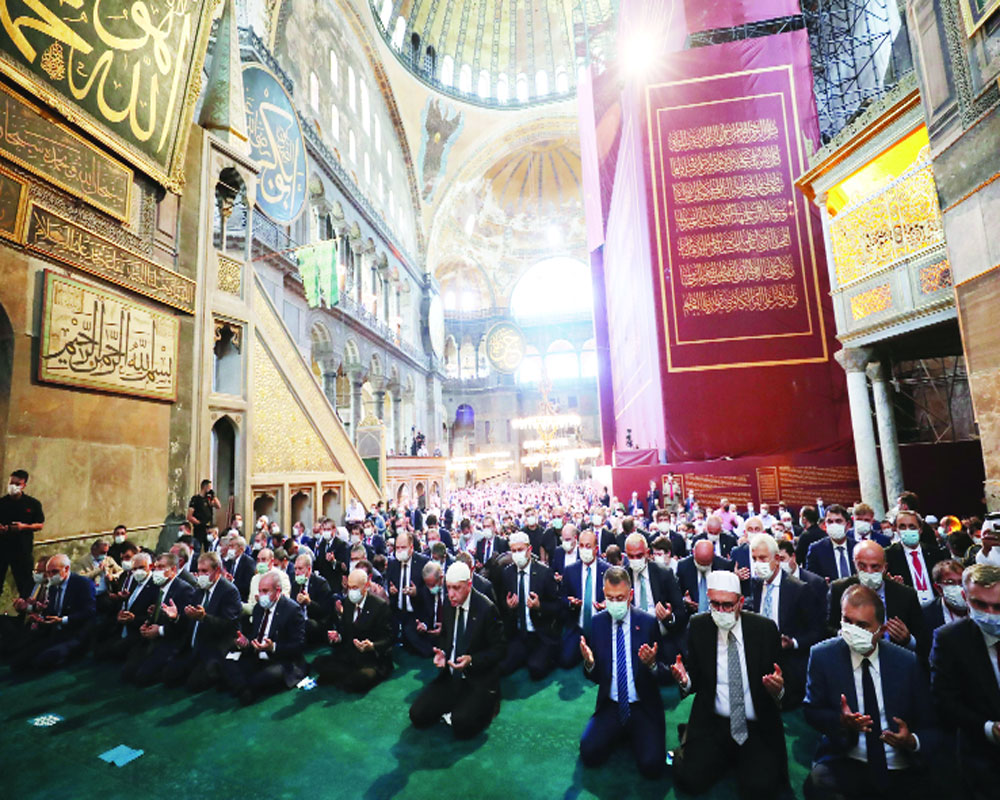 The strange goings-on in Turkey have baffled secularists around the world as the nation’s judiciary capitulated to the specious argument of President Recep Tayyip Erdogan to turn the clock back to 1934 and convert the Hagia Sophia museum into a mosque. The conversion of Hagia Sophia museum, which is not only an architectural masterpiece but also an epitome of Muslims-Christians’ shared traditions and unity, is a milestone in Erdogan’s purported narrative of reviving the Ottoman-era “superiority” of the Islamic culture and the resultant consolidation of his power.

The conversion of then church-turned-mosque into a museum by a 1934 decree was a modernist idea of Mustafa Kemal Ataturk, who aimed to erase the sign of religious conversion of an Orthodox Christian cathedral into a mosque by the Islamic Ottomans. Before that Hagia Sophia was the cynosure of Christians as only during and after the Renaissance, bigger churches were constructed. It’s this historical baggage, the repurposing of Hagia Sophia is a matter of grave concern for Muslims, Christians.

The secular world, besides religious and political leaders, has voiced their indignation at the conversion of Istanbul’s multi-religious heritage into a mosque, with churches in Greece and the USA observing a “day of mourning”. While the turn of events in the modern Muslim majority nation, which is geographically and culturally a bridge between the East and the West, has dismayed the world, the move is not an utter surprise if one has kept track of the decisions of President Erdogan.

Starting from his taking up the reins in 2003, Erodogan has taken recourse in various methods to consolidate his power. He started with the promise of building the nation an economic power. Once hailed for steering Turkey towards rapid economic development, Erdogan is now struggling to deal with shaky finances. His compulsive urge to pursue the Islamist agenda is to sweep those problems under the carpet. In public, Erdogan envisions reviving Turkey’s power and influence enjoyed during the Ottoman era. Therefore, he is helping build mosques, financing religious education in foreign countries around the world from Latin America to sub-Saharan Africa. But his real aim remains the same: to stick to power with public support. It has caused secular voters to lose their ardour for him.

According to an opinion poll this month, 43 per cent Turks consider the conversion move a political manoeuvering to gag any discussion on the nation’s economic woes. In an unprecedented result, Erdogan bit the dust in last year’s municipal elections in two biggest cities, national Capital Ankara and his home turf Istanbul, at the hands of the main Opposition Republican People’s Party.  This shameful electoral drubbing, along with financial woes, has forced him to look for ways to divert attention of the general public and lure back conservative Muslim voters. And, the Hagia Sophia decision is his implicit declaration that Islam is the unofficial religion of Turkey.

The unspoken declaration spurred a significant section of Turkish society to lambast the Erdogan Government, but the undercurrent among the middle class was elation at the Hagia Sophia conversion. Turkey being the only modern powerful secular country in the Muslim world, the radicalisation process has paid Erdogan the much sought-after dividends.

To widen his reach and influence of Islamist politics and to install himself as a champion of the Ummah, Erdogan takes keen interest in denouncing the world community for its fixated attention on the “Islamic terror” while ignoring terrorism by non-Muslims. His new-found interest in Kashmiri Muslims and Rohingya Muslims can be contrasted with his strong rejection of the historical fact of the Armenian genocide by the Ottoman Empire.

In fact, for an elected conservative Muslim leader whose popularity is on the wane, it is impossible to resist the morass of popular antipathy towards non-Islamic symbols. Hagia Sophia was a festering wound for the Islamists who had been pushing for its conversion back to a mosque for decades as they consider the Kemalist secularism only hurt the Islamic culture and Turkish nationalism. Erdogan’s decision to convert this ancient church-turned-mosque-turned-museum into a mosque is consequence of that desire to give a death blow to the symbol of that humiliation. And it also serves the political purpose of Erdogan.

However, as Turkey is not well linked to the Islamic civilisation and history, nor has it living evidence of religious relics as seen in the Arab world, Erdogan lacks the natural ability, like that of Saudi Arabian leaders, to claim the leadership of the Muslim world. Therefore, the Hagia Sophia decision aims to weave a new narrative of Islamic traditions, which, in fact, is in contravention of the Islamic values.

Learned Muslims may be aware of the historical truth that medieval Muslim invaders didn’t encroach on the places of worship of the People of the book, Christians and Jews. However, Ottomans blatantly flouted the norms. And Erdogan is hell-bent on resurrecting that Ottoman era.

As the world is distraught at the regressive approach of Erdogan, the common refrain is what’s next from the Turkish President. However, at this stage, it is difficult to read the tea leaves about what Turkey will become as multiple factors, including domestic political developments, Islamist crisis in the neighbourhood, and geopolitics, play role in shaping up the future events. On the extreme end of that spectrum, the move may trigger competitive narratives of Islamism in Turkey and neighbouring nations who look upon the modern secular Muslim country; it may also convince many Muslim nations that secular-democratic politics is alien to Islamic culture and traditions.

However, considering the resilience of deeply embittered secular Turks, Erdogan’s gimmick doesn’t guarantee unbridled reign for the neo-Ottoman. Nevertheless, one thing is certain: The results of the next general election will determine whether the Kemalist doctrine of top-down secularism still appeals to the masses.

(The writer is Associate Editor & News Editor, The Pioneer)