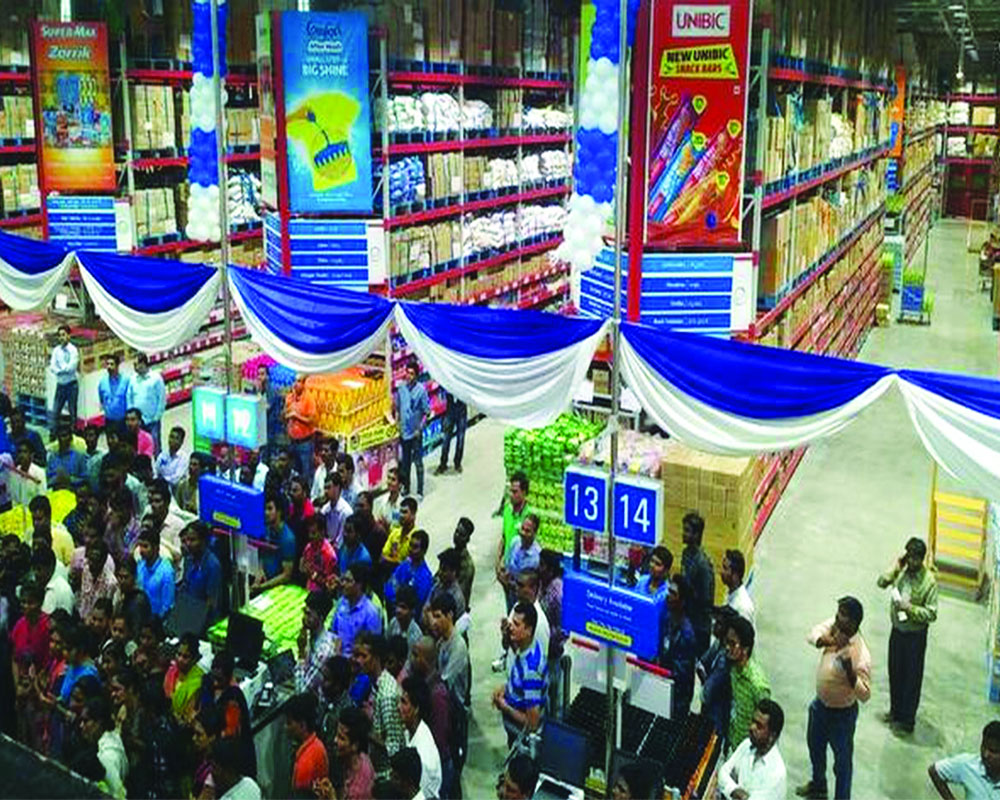 The Govt must allow 100 per cent FDI in retail as this will level the playing field for all, eliminate discretion of bureaucrats whose writ is all-pervasive and help small traders

On April 22, the California-based US internet giant, Facebook, announced its decision to buy 9.99 per cent stake in Jio Platforms Limited (JPL) paying more than Rs 43,450 crore. JPL is a 100 per cent subsidiary of Reliance Industries Limited (RIL) and has in its fold a wide spectrum of businesses such as wireless broadband, home broadband, enterprise broadband, narrowband, internet-of-things businesses, a bouquet of digital applications, e-commerce and so on.

This was followed by a flurry of investments with big names such as  General Atlantic, Silver Lake, Qualcomm, Intel, Vista, Google and so on, bringing in cumulative investment of over Rs 1,00,000 crore, taking the total to Rs 1,50,000 crore. In lieu of this capital, they get aggregate shareholding of 30 per cent or Rs 5,000 crore for every one per cent, thus valuing the company at a whopping Rs 5,00,000 crore.

Even as foreign investors see value in every segment of the business on this platform, at the centre stage is e-commerce, which is being powered by JioMart commerce platform — a unit of JPL. In fact, Facebook has come in primarily with an eye on tapping opportunities in this area and signed a comprehensive agreement with JPL to exploit synergies between the two conglomerates.

The duo intend to offer technology-enabled wherewithal to enable consumers access neighbourhood stores and have products delivered at their doorsteps. About 30 million of these stores will be empowered to digitally transact with every customer in their neighbourhood (over 400 million-strong Indian database of WhatsApp — a 100 per cent subsidiary of Facebook — will come in handy). JioMoney — RIL’s payment platform — will be integrated into the JioMart venture to facilitate hassle-free seamless payment for transactions. The model operated by Reliance under JioMart is a combination of online and offline retail. Apart from Reliance Retail Limited (RRL), which has thousands of retail stores spread all over India and gets hooked on to the Jio platform, it will be serving tens of millions of neighbourhood stores in a variety of ways viz. handling, procurement, storage, payment, delivery and so on. Since all of this will be powered by a digital eco-system, the model is a hybrid of online and offline.

Two things are abundantly clear: Reliance Industries is deeply entrenched in Indian retail — already through RRL and now increasing its footprint exponentially through the Jio Platform. It is getting a massive injection of Foreign Direct Investment (FDI), with Facebook alone having pumped Rs 43,450 crore into JioMart. But this is out of sync with the extant policy in regard to FDI in retail. For the purpose of FDI, unlike the international practice where retail is treated as a single homogenous sector without any distinction, the Indian Government has divided retail into several classes. In India, we have Single-Brand Retail (SBR) and Multi-Brand Retail (MBR) and there are sub-categories within each. Here, we deal with MBR or retail — as it is known in common parlance.

Within MBR, there is the “physical” format or offline, which takes two forms: The euphoric mom-and-pop stores, also nicknamed neighbourhood stores, and organised retail. Then, we have the online format, which has two sub-categories, the marketplace model and the inventory-based model.

In the physical format, as per a policy approved by the then UPA dispensation in 2012, as much as 51 per cent FDI is allowed but with a plethora of riders such as 30 per cent local sourcing, minimum investment of $100 million and prior approval of the State where the retail shop is to be set up. In 2016-17, an unprecedented 100 per cent FDI in food retail was allowed, subject to the foreign retailer selling items which are sourced only from Indian farmers and processed locally. Besides, 25 per cent of investment should be in agri-infrastructure like irrigation, farm machinery/implements and so on. In the online format, as per guidelines issued in early 2016, (Press Note 3) 100 per cent FDI is allowed under the so-called marketplace model. The marketplace is a platform where vendors sell their products to consumers even as its owner merely acts as a facilitator. The marketplace owner provides services such as booking orders, raising invoices, arranging delivery, accepting payments, handling rejections, warehousing and so on. But, s/he can’t hold inventory and undertake direct selling.

The permission for 100 per cent FDI in the marketplace is subject to two main riders, that is “the entity cannot permit more than 25 per cent of total sales on its platform from one vendor or its group companies. Further, it can’t directly or indirectly influence the sale price.” Sans any specification as to “who the vendor is”, a firm linked to the marketplace (either its subsidiary or a Joint Venture with an Indian company) is eligible.

Thus, contrary to the real intent of the policy, which disallowed the marketplace owner from direct selling to individual consumers, the fine print permitted them to do so — albeit by its subsidiary or JV. This is precisely what e-commerce majors such as Amazon and Flipkart/Walmart have been doing even though they came in as marketplace operators. They are operating as direct sellers, controlling inventory, giving discounts and so on.

A clarification to Press Note 3 issued on December 26, 2018 has not materially altered the position on ground zero. It says “the owner of the marketplace or its subsidiary or its JV with Indian company can’t have ownership of the seller.” Further, “a seller/firm on the platform can’t source more than 25 per cent of its inventory from a firm connected with the latter.” The marketplace owner can get around both. First, by having less than 50 per cent shareholding in the seller firm and argue, he has no control (albeit majority) over the latter and second through the wholesale arm continuing supplies to the seller but within the 25 per cent threshold.

The clarification has not deterred their hold over Indian retail; they are dominant sellers themselves, giving little space to millions of small vendors for whose benefit this unique policy dispensation of the marketplace was designed. Disingenuous bureaucrats allowed them to do so by crafting policy architecture to suit them.

The small vendors, through their umbrella organisations such as All India Online Vendors Association (AIOVA), Retailers Association of India (RAI), Delhi Vyapar Mahasangh (DVM) and so on, have petitioned judicial authorities at various levels seeking action against Amazon/Flipkart for violation of FDI norms and indulging in unfair practices but have not got any relief. The sole reason is that the courts go by the fine print which suits these giants.

Unlike the marketplaces of foreign e-commerce majors, JioMart commerce platform floated by RIL holds the potential of giving a boost to the small vendors, but even this may not gel with the extant policy framework. Even as the main thrust of the policy is on “complete prohibition of FDI in direct selling to individual consumers”, JioMart, which is deeply entrenched in direct sales, has received investment from Facebook — a foreign company.

Like Amazon et al, Reliance/Facebook may get around by citing that foreign shareholding in the seller firm is less than 50 per cent or a wholesaler linked to JioMart owner Reliance/Facebook will keep its supplies to the vendor within the 25 per cent threshold. Or they may carve out a separate entity entirely for food retail where 100 per cent FDI is allowed. This way, the two would be able to demonstrate that they are not violating the rule book. But this is not the way to go.

Looking at what is happening on ground zero, it is abundantly clear that the Modi Government has no objection to permitting FDI in online retail and even in offline retail (albeit without any riders) as amply demonstrated by the treatment meted out to Amazon/Flipkart earlier and now to Facebook riding piggyback on RIL. If that be so, then why allow it to happen in a vague and convoluted manner? Why should the policy not be clear-cut and transparent? Why should FDI not be allowed through the front door?

The Government should shun the marketplace model. It should allow 100 per cent FDI in retail in both online and offline without any riders (the special categories such as 100 per cent FDI in food retail should go). This will level the playing field for all, online vs offline, food retail vs non-food, marketplace vs inventory and so on and eliminate discretion of bureaucrats whose writ is all-pervasive when it comes to grant of approvals.

It will help small traders by leading to all-round development of infrastructure and offering a wide range of choice for sourcing products. They can and will co-exist with big players — both foreign and Indian. It will be pro-consumer in the long-run with many players catering to their needs at competitive/affordable price. Sans these policy changes, under business as usual scenario, the consumers will pay a heavy price in the medium to long-term as Indian retail will be cartelised by a few players viz. Amazon, Walmart and Facebook/RIL.