France at the crossroads of liberty vs Islamphobia

France at the crossroads of liberty vs Islamphobia 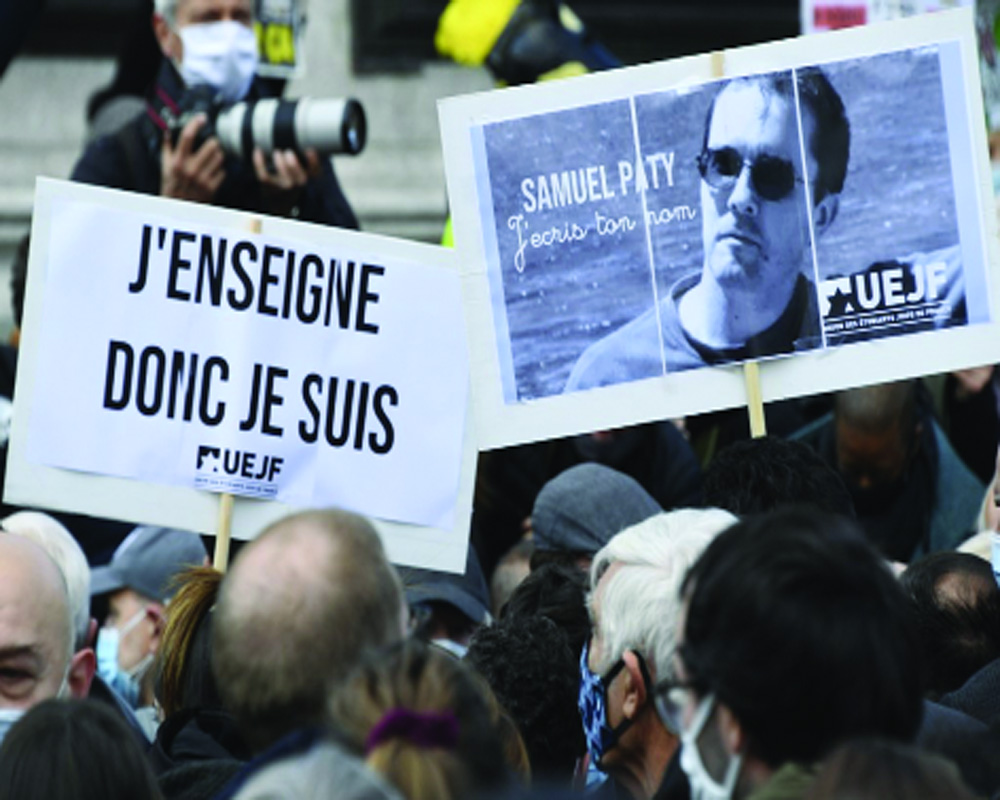 Article 24 of the New Security Bill has given impetus to already fierce debate, within France and outside, on its relations with Islam and Muslims, particularly after the brutal beheading of French schoolteacher Samuel Paty, who was accused of committing the sin of showing to his students the Charlie Hebdo’s 2012 cartoons depicting Prophet Muhammad

The New Security Bill (NSB) proposed and passed by the Lower House of the French Parliament is creating a big controversy across the country. In totality the Bill has 32 articles dealing with a broad range of issues such as road security to drones to how municipal police are to be organised. Out of all, the Article 24 which is included in Chapter 4 of the NSB is drawing maximum controversy from across the world starting from rights groups to UN Human Rights agencies. Article 24 of the new Bill would now prevent people to publish images of police officers in action.

This has moved thousands to the street demanding its immediate repeal. And people say this violates basic freedoms guaranteed under the French Constitution. The NSB has started a long debate on secularism or what in French language called “laicite”.

The UN Human Rights head, Michelle Bachelet, called on the French Government to withdraw the new law, particularly Article 24 which may curb freedom to share images identifying police. She says the law should be discussed by the French people and the Article 24 should be withdrawn.

In response to this, the Emmanuel Macron administration stated that it would rewrite that article that curbs rights to circulate images of police officers.

If we unearth the background to the NSB, we can easily say it has emerged after the brutal murder of French schoolteacher Samuel Paty on October 16, 2020, in a suburb of Paris city.

He was beheaded by Islamic terrorist named Abdoullakh Abouyedovich Anzorov, an ethnic Chechen refugee staying in France. According to the terrorist-murderer, Paty committed the crime of showing his students the Charlie Hebdo’s 2012 cartoons depicting Prophet Muhammad. And it was done in a class to impart the students the very sense of freedom of expression. This gruesome murder of the teacher had forced thousands to descend on the roads demanding immediate action from the Government against the growing incidents of Islamic terror across the country.

France remains traumatised by a series of Islamic terror strikes that killed many in 2015. As much as the Charlie Hebdo killings, the brutal beheading of Paty has demonstrated a direct assault on one of the main pillars of the French Republic i.e. the secular public school system and the very right to freedom of speech.

Meanwhile, the far-right leader and tipped to be the principal challenger for Macron in 2022 presidential poll, Marine le Pen has said, “This situation calls for a strategy of reconquest. Islamism is a bellicose ideology whose means of conquest is terrorism.” In fact her party has been targeting the Muslims and migrants for the last nearly half a century.

President Macron has already started a campaign against what he calls Islamic separatism. Besides, by vowing to fight the Islamic terror and recognising Paty’s act as a freedom of expression, Macron is highlighting the importance of national security and the very importance of the basic values established by the Constitution of France. But many say Macron is eyeing a large vote base belonging to the right-wing which could help him win the presidency again in 2022. Therefore his speech after the murder of Paty clearly reinforced the idea to the French people that a large group of violent Muslim contingent is there in the suburbs, waiting for an opportunity to tear down the basic ethos of French society.

He also describes Islamic separatism as a deviation of Islam which is “a conscious, theorised, politico-religious project which is materialised by repeated discrepancies with the values of the republic, which often results in the creation of a counter society and whose manifestations are the dropping out of schoolchildren, development of sports, cultural and communal practices which are the pretext for the teaching of the principles which do not conform to the laws of the republic’’.

This was more than sufficient for Macron to invite the ire of the Muslim nations, including Turkey. Turkish President Recep Tayyip Erdogan has described Macron as mentally ill.

The French Constitution of 1958 clearly says “all citizens regardless of their origin, race or religion are treated as equals before the law and respecting all religious beliefs”. And now it seems the NSB is violating the principles laid down by the Constitution of 1958.

That’s why the critics say the way the French President is using the state security apparatus to pound on civic and human rights organisations indicate entirely a unique behaviour of the state under Macron. Besides, his attitude towards the minority exposes the underlying malaise that delves deep into the French political institutions of today.

The French constitutional principle “liacite’’ imposes strict religious neutrality on both the state and all types of public services. This principle indeed symbolises a pillar of the very secular identity of the French Republic. The NSB is all set to change this foundation in the name of protecting the state from terror. But many say it is new form of political coercion launched by the Macron administration just in the name of national security.

The people who oppose the NSB say it is a unilateral assault on Muslims and Islam. They all accuse him of not showing wisdom and moral leadership at this moment of crisis in French society. But They say Macron has put forward an agenda to malign Islam by closing down major mosques, banning Muslim and human rights organisations. These latest measures to tighten the security around the country have simply stirred hatred against the Muslims across France.

Further this has emboldened the far rights groups and violent extremists to mobilise the French to counter and prevent refugee movements around the country. However, a group of 23 organisations that mobilise young Europeans has called out to President Macron to stop the raging hatred. They all urged Macron to embrace France’s revered principles of “egalite, liberte and fraternite’’. In their open letter to him they highlighted that “it is within your capacity to nurture understanding between people and to counter dangerous forms of polarisation within France and globally’’.

To them he must pander to the bigots and aptly demonstrate his moral leadership so as to survive France’s long-held ethos of multiculturalism.

France has already launched a massive campaign against “the enemy within’’ as its hardline Interior Minister Gerald Darmanin has directly pointed the finger at the country’s radicalised Muslims.

Now the moot question is whether France is going to compromise with its national security. It’s a clear choice between security and liberty. It’s the utmost responsibility of the freedom loving French citizens to decide over it. But precisely, its people, it seems, are offering a helping hand to Macron to counter the fast-growing Islamic jehad in the country.