From Gandhi’s ideas to NEP

From Gandhi’s ideas to NEP 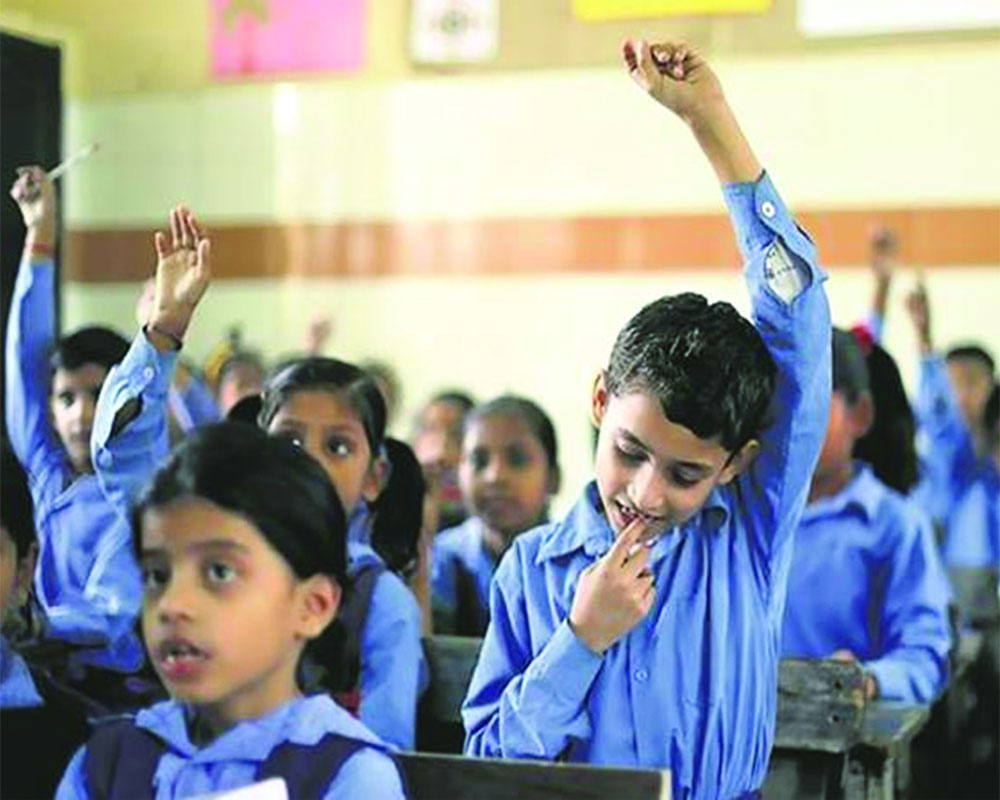 India enters the implementation phase of its new National Education Policy — NEP 2020 — that envisions “an education system rooted in Indian ethos that could transform India, that is Bharat, into an equitable, sustainable and vibrant knowledge society, by providing high-quality education to all and thereby making India a global superpower.” It is, indeed, a tall order but a critical necessity to let the benefits of education reach the “last man in the line,” waiting for generations to get the basic human amenities, human dignity and opportunity to make his contribution to the process of national growth and development.

Finalised after over four years and an extensive and intensive nation-wide consultation process, the policy expects the curricula and pedagogy to be radically transformed to instill a “deep sense of respect towards the fundamental duties and constitutional values, bonding with one’s country and conscious awareness of one’s roles and responsibilities in a changing world”. The bonding with the country and an inherent sense of pride in its people is doubly emphasised, not limiting it to only in thought, but extending it to “spirit, intellect and deeds, as well as to develop knowledge, skills, values, and dispositions that support responsible commitment to human rights, sustainable development and living, and global well-being, thereby reflecting a truly global citizen”.

Revert to what Mahatma Gandhi wrote in the Harijan of May 8, 1937: “Man is neither mere intellect, nor the gross animal body, nor the heart or soul alone. A proper and harmonious combination of all the three is required for the whole man and constitutes the true economics of education”. Essentially, the emphasis from Buniyadi Talim to NEP 2020 remains on transforming the learner into a personality, a person of strong character. In other words it must be “man-making education”. Gandhi put it like this: “By education I mean an all-round drawing out of the best in child and man — body, mind and spirit”.

Based upon his experiences and experiments in education, Gandhi finally proposed the idea of Buniyadi Talim, basic education, at the Wardha Conference in the year 1937. Even earlier, he devoted time and energy to envision the shape of education in the post-independence period in India. He wanted art, craft, health and education to be integrated into the process of teaching and learning. Nai Talim, to him, was a beautiful blend of all the four. He found it consistent with the environment in India, which is predominantly made up of villages. Further, he wrote,  “it believes in establishing equilibrium between the body, the mind and the spirit of which man is made. It is unlike the Western type which is predominantly militarist, in which the mind and the body are the primary care of education to the subordination of the spirit. This is best done when education is given through handicraft.” He could propose this because of his deep understanding of Indian mind, needs and aspirations on the one hand, and experiences gained through his personal experiments in education at his ashrams.

Gandhi’s historic speech made at the Royal Institute of International affairs at Chatham House, London, on October 20, 1931, articulates the decline of Indian education after the arrival of the British: “ I say without fear of my figures being challenged successfully that today India is more illiterate than it was fifty or a hundred years ago, and so is Burma, because the British administrators, when they came to India, instead of taking hold of things as they were, began to root them out. They scratched the soil and began to look at the root, and left the root like that, and the beautiful tree perished.”

Sir Philip Hartog challenged Gandhi, who remained steadfast in his conviction. Subsequently, eminent thinker and researcher Dharampal established that Gandhi was correct based on factual documentary evidence extracted from the records created by the British officers. The most important strategic intervention in sustaining the British hold over India was through education: destroy the age-old edifice of knowledge creation, transfer the new model to the generation ahead and ensure its application in the welfare not only of the individual but of the people. In the process, the imperialists succeeded in “delinking Indians from their history, culture and heritage.” They attacked the roots of that beautiful tree, and it dried up. The policy succeeded beyond expectations for the alien rulers, as Indians grabbed the bait of Western knowledge, culture, language and its “superiority.” It has not yet been erased.

The NEP 2020 must be incisively scrutinised for how far it would link Indians to India and to what extent it would give young Indians not only degrees and certificates but also the knowledge, skills and a personality to move ahead in life with self-assurance, dignity and spirit of adventure. Let the implementers remember the defects Gandhi had identified in a long article in the Young India of August 1, 1921, just hundred years ago. Declaring the then system as defective, apart from its association with an utterly unjust Government, he points out three of them: “First, it is based on foreign culture to the almost entire exclusion of indigenous culture. Second, it ignores the culture of the heart and the hand, and confines itself simply to the head. Third, real education is impossible through a foreign medium.”

The earlier national policies on education of 1968, 1986 and 1992 made sincere attempts to bring in reforms in curricula, pedagogy and the system of assessment and examination but the craze for more marks and English medium schools  shrugged off all such efforts.

Gandhi’s understanding of India and the mind of its people was unparalleled. He knew the necessity of acquiring skills, working with hands, health, nutrition and acquisition of character coupled with the internalisation of moral, ethical, humanistic and constitutional values.

And this would be achieved only when the goal of education is man-making, character development and ensuring a full-blossomed personality. This is the eternal challenge before education and the NEP 2020 accepts it. The implementers of the NEP 2020 must seriously examine the continuity of the epistemological basis and practical realities, right from Buniyadi Talim to the challenges before them. They have before them a policy that is “rooted to culture and committed to progress.” It is easy to locate elements in this policy that could lead to the Sarvodaya that Gandhi had learnt while in South Africa after reading John Ruskin’s book Unto This Last: “First, the good of the individual is contained in the good of all.

Second, a lawyer’s work has the same value as the barber’s, in as much as all have the same right of earning their livelihood from their work. Third, the life of a labour, that is, the tiller of the soil and the handicraftsman, is the life worth living”. The NEP 2020 prominently highlights equity, equality, working with hand and value nurturance, right from the beginning in schooling.

Once the curriculum designers, textbook writers and textual material developers are well-versed in the philosophy behind the formulation of the Buniyadi Talim and its relevance to India and its people, they would really be able to create a generation proud of its history, culture and heritage. All of it appears very prominently in the policy that “envisions an education system rooted to Indian ethos that contributes directly to transforming India.”

Universal education was considered a ray of hope for one and all. The NEP 2020 endorses it as the “basic right of every child.” It must be correctly interpreted as the right of the child to get support in drawing out the best out of body, mind and spirit. It is his right to make choices of learning areas according to his likings and interests. It would be interference in his personal territory if subjected to a regimen that impedes his “power of ideas and imagination.” This is what the present examination system has exactly been reduced to; the policy envisages drastic transformation in this crucial area. The recommendations on holistic and multi-disciplinary education would permit free flow of fresh air in schools and higher education institutions. It could lead to a surge of curiosity and creativity amongst young minds. That is the need of the current time and of the future. Now onwards, in knowledge societies, progress would depend on the quality of manpower, the measure of entrepreneurial skills and the level of innovative contributions.