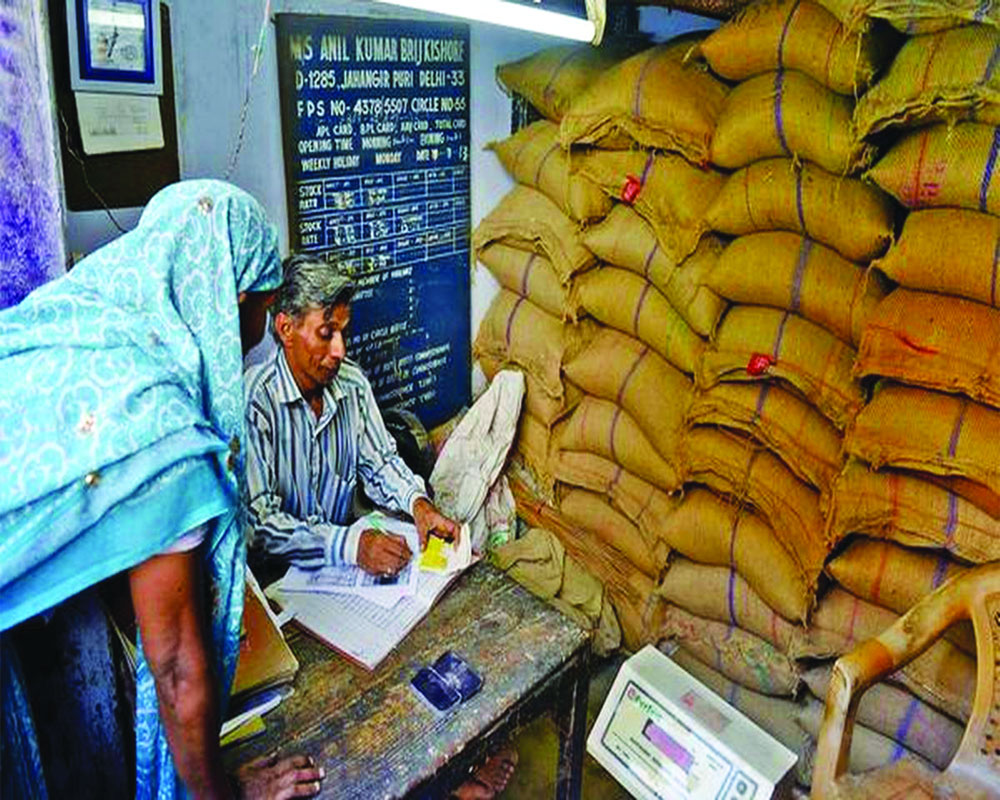 Tax collections are far from adequate to pay for free food and the Govt is borrowing heavily to make up for the shortfall, thereby imposing an unsustainable burden on the future generation of taxpayers

To shield millions of poor from the devastation caused by the Covid-19, Finance Minister Nirmala Sitharaman had announced that the Government would give five kg of rice or wheat per person per month for “free” to around 80 crore people through the Public Distribution System (PDS) for three months. It would also give for “free” one kg of pulses per household for three months. This was in addition to five kg of cereals per person per month that 80 crore beneficiaries are already getting at a heavily-subsidised price of Rs 3 per kg rice, Rs 2 per kg wheat and Rs 1 per kg under the National Food Security Act (NFSA).

As the deadline for the free supplies ended on June 30, the same day the Prime Minister announced extension of the scheme for five months till November 30. This time, the Government will also provide one kg grams free to each family per month.

Enumerating a spate of festivals during the extended period, when the demand normally increases, Narendra Modi exhorted that it was necessary to continue with additional supply (albeit for free) to ensure that people are not hard-pressed. He also thanked farmers for producing the required quantity of food and the taxpayers for helping the Centre garner resources to facilitate supplies to the poor, free of cost.

But what Modi didn’t say is that collections from tax are far from adequate to pay for free or subsidised food supplies and that the Government is borrowing heavily to make up for the shortfall, thereby imposing an unsustainable burden on the future generation of taxpayers. Let us check out some facts.

Under the NFSA, the supply of wheat, rice and coarse cereals to the beneficiaries/consumers at Rs 2/3/1 per kg is a fraction of the cost of procurement, handling and distribution (e.g. 1/12th in case of wheat). The supplies are made by the Food Corporation of India (FCI) and other State agencies on behalf of the Centre who reimburses to them an amount equal to “the difference between the cost and the sale price multiplied by the quantity sold.” This reimbursement amount is known as food subsidy.

That was before the Covid-19 crisis. It does not include the impact of free food given during April-June, (Rs 60,000 crore) and promised by Modi for July-November (Rs 90,000 crore). With this additional expenditure of Rs 1,50,000 crore, the total spend on food subsidy during the current year will cross the Rs 4,00,000-crore mark (in case, the scheme is extended beyond November,  that will further inflate the bill).

Given the highly-fragile resource position (due to a steep fall in tax collections on the one hand and Covid-19-related hike in expenses on the other), the Government is unlikely to provide any extra amount over and above the Budget allocation of Rs 1,16,000 crore. This means that all of the incremental amount, Rs 1,50,000 crore, will be borrowed by the FCI. Together with the Rs 1,37,000 crore initially budgeted, the total borrowings by the FCI during 2020-21 will be Rs 2,87,000 crore.

Add to this figure the cumulative borrowings of Rs 2,00,000 crore as on March 31, 2019 plus Rs 1,10,000 crore borrowed during 2019-20. The total amount owed by the FCI to the NSSF would be close to Rs 6,00,000 crore by the end of the current fiscal. Though staying on the balance sheet of the FCI, the fact remains that this mammoth debt is entirely the liability of the Union Government and will need to be serviced from the latter’s tax collections in the future.

In the past, thanks to inadequate allocation in the Budget, the Government had been making short payments to the FCI, forcing the latter to borrow from banks to sustain operations. When the FCI started taking loans from the NSSF in 2016-17, the Centre had committed to release the subsidy arrears to enable it to pay back in subsequent years. But that was not to be. The subsidy arrears kept mounting and the FCI kept on borrowing more and more from the NSSF.

The Indian food subsidy regime remains fundamentally vulnerable. The  Covid-19 crisis has only aggravated this vulnerability. The irony is that despite spending mammoth sums, even the poor are not getting full justice. The supplies under the NFSA at five kg per person per month barely cover 50 per cent of the requirement of a person which is 10 kg per month, as estimated by the National Sample Survey Organisation (NSSO).

This forces him/her to buy the balance quantity from the market at a much higher price, which in the case of rice, is at least Rs 35 per kg, being linked to the cost of supply. For buying 10 kg, the poor have to spend a total of Rs 190 (five kg at Rs 3 per kg plus five kg at Rs 35 per kg). Thus, the effective price works out to Rs 19 per kg instead of Rs 3 per kg that s/he should be paying. Unless the subsidy imbroglio is addressed and payments are brought down to sustainable levels, India runs the risk of falling into a debt trap. Broadly, there are three major factors behind high and ever-increasing food subsidy viz. high cost of supply, low issue price and an ocean of beneficiaries.

The cost of supply includes the Minimum Support Price (MSP) paid to farmers besides the handling and distribution cost. While the former is computed as cost of cultivation plus 50 per cent of this as profit, the latter is reimbursed to handling agencies on “actual” basis. This system of paying on “actuals” devoid of any norm with regard to efficiency in operations lies at the root of both the MSP and handling and distribution cost being on a rising trajectory at all times.

The price at which foodgrains are issued to beneficiaries, i.e. Rs 2/3 per kg for wheat and rice, are almost close to “zero.” This means that almost the entire cost of supply is subsidised. In case of rice, with Rs 35 per kg being the cost, Rs 32 comes from the Government as subsidy. In such a scenario, rampant misuse of subsidy is inevitable.

Finally, the beneficiaries getting food at near zero price are over 80 crore or nearly two-third of the population. Is India home to that many poor? There is something seriously amiss as the official word on the number of poor is no more than 25-30 per cent. Yet, if over 80 crore people are eligible for food virtually for free, the subsidy bill is bound to become unsustainable.

In early 2015, a committee under Dr Shanta Kumar, a senior BJP leader, had examined these issues. It recommended a cut in beneficiaries from 67 per cent to 40 per cent. It also proposed  restricting the benefit of Rs 1/2/3 per kg only to the poorest of poor people under the Antyodaya Anna Yojana while increasing the supply to seven kg per person and making the rest pay 50 per cent of the MSP paid to farmers. That report is lying in cold storage.

The above recommendations can help in saving a good amount of money. But this is far from making a dent in the problem of a ballooning food subsidy. A sustainable solution won’t emerge so long as the Government remains involved in procurement, handling and distribution of foodgrains; as then, all stakeholders will expect it to do all that keeps the subsidy bill rising all the time. Thus, farmers would want it to pay higher MSP; handling agencies won’t rein in costs and more and more people would wish to come under the NFSA.

The Government should withdraw from buying and selling of food. Instead it should restrict its role only to giving subsidy directly to the poor using the Direct Benefit Transfer (DBT) option. This will also be in sync with its big bang reforms (announced on May 15) giving an unfettered role to the private sector in agri-marketing. The State agencies may continue but as a commercial entity at par with private players. Then only will we have real food security in the country without mortgaging the future.