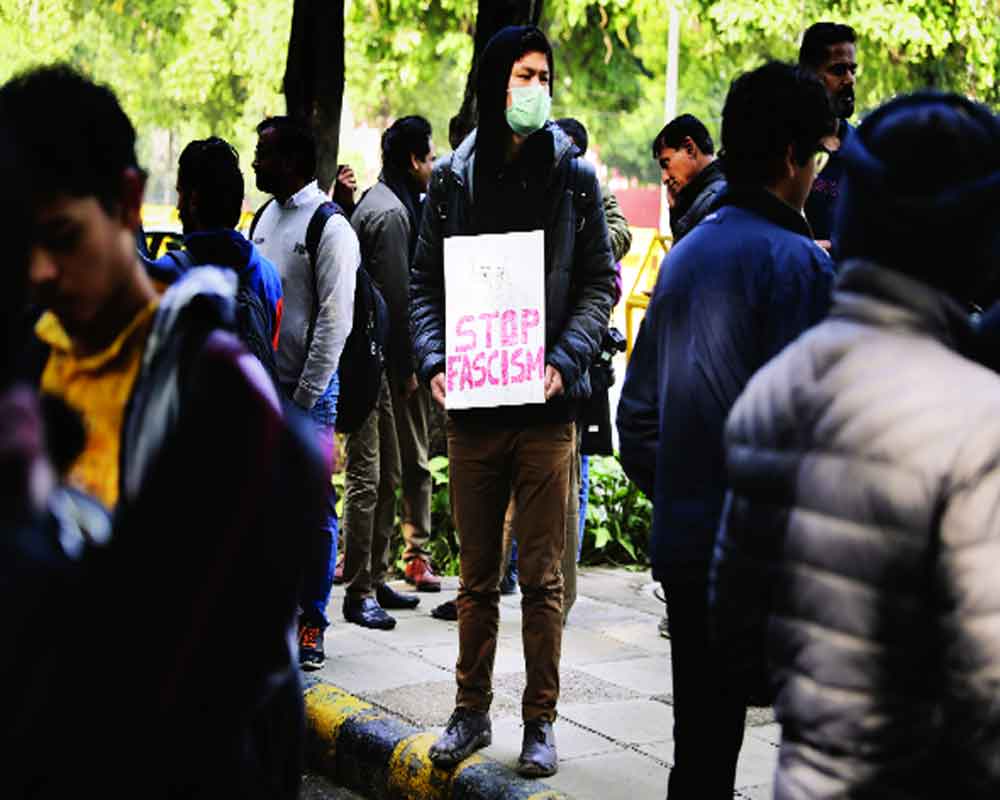 In the end, the Delhi Police was left to do the job as a purveyor of the official narrative, a tough one when the nation’s eyes are on the violence at the Jawaharlal Nehru University (JNU) and its perpetrators. A tougher job when its no-show during the mayhem has raised questions on its institutional integrity and loyalty to its role ordained by the Constitution. That, too, at a time when there have been far too many eyewitnesses, live accounts and videos of an unruly mob beating up students in the campus that do not leave much of a doubt as to how events unfolded. It is, therefore, left with the onerous task of exonerating itself and the establishment of any maleficent design of crushing dissenting students. Hence its probe report reduces the enormity of the brutalisation of the campus as a feisty war of ideologies between the Left and Right student groups, their mutual provocation, which spun out of control and descended into chaos. In its books, both were to blame and both had smuggled in outsiders. And to please its political masters, it has focussed on the origin of the problem, in this case Left-inspired protests over fee hike, naming student union leaders more frequently than Rightist student leaders and groups, who have masqueraded themselves as marauders. This follows the familiar trope of making everybody look like a victim of circumstance, and, therefore, absolving everybody of responsibility. So a general picture has emerged of the Left-dominated students’ union protesting against fee hike and stopping the registration process to drive home their point through a confrontationist style of scuffles, gheraoing the server office and stalling operations. In the process, they came to blows with Right-wing students of the Akhil Bharatiya Vidya Parishad (ABVP), who have been tasked with the regime’s agenda of cleansing the Left ideology from the country’s campuses and ensuring a new cultural revolution. A day later, the other side allegedly went about teaching its own kind of lesson, a fact now corroborated by a TV expose and proud claims by fringe groups. Nobody condones any kind of violence, no matter what the colour, but selectively using evidence to colour a probe is just fogging out the truth. Assigning causality and not condemnation of the consequence is wrong. For guilt will remain in the realm of suspicion, not facts. It is a comment on our police system, which has now begun to mimic that of totalitarian regimes in history, where policing had an explicit political dimension and was directed against those perceived as threats.

The probe, which the Delhi Police says will be staggered as it still doesn’t have evidence, has raised more questions than answers. And, if indeed investigation is a long process, then the entire findings should have been revealed together rather than naming suspects for one episode while conveniently leaving out the other. Or be discriminatory against the students’ union because it is easier playing up stereotypes than exposing the new face of campus aggressors. There should also have been an explanation why the majority of those gravely injured belonged to the Left-backed unions, or why they would self-inflict woes upon themselves when they could have fought their issues full-bodied and healthy? Till we get these answers, every evidence swirling around gets dumped in a basket of conspiracy theories. And theory being theory cannot battle the heft of the official narrative, especially one that is propagandist and force-fed. But they certainly can keep the issue alive, a fact that suits all parties concerned, to be used and abused at will. Except in JNU, the night of the broken glass was seen by many people who need no convincing. Students and teachers were made to live in a house of horrors and beaten up, not because it is a battleground of competing ideologies just like any other campus but simply because it is a crucible of national conscience and has been fostering a culture of mindfulness, learning and dialogue. Simply because it nurtures thinking citizens who can question gullible ones and have the spine to stand up to what the State should not become. Simply because it seems disruptive in a faux stability of a deeply divided society, arising from domination by intimidation. Had this not been the case, the “I told you so” narrative of demonising the students’ union would not have been peddled with such fury and rapidity. Whether this crackdown will indeed end up scaring a generation, tire them out or strengthen their resolve to continue peacefully despite the odds remains to be seen. Because it is only students who can be uncompromising.