Hold on to Chushul

Hold on to Chushul 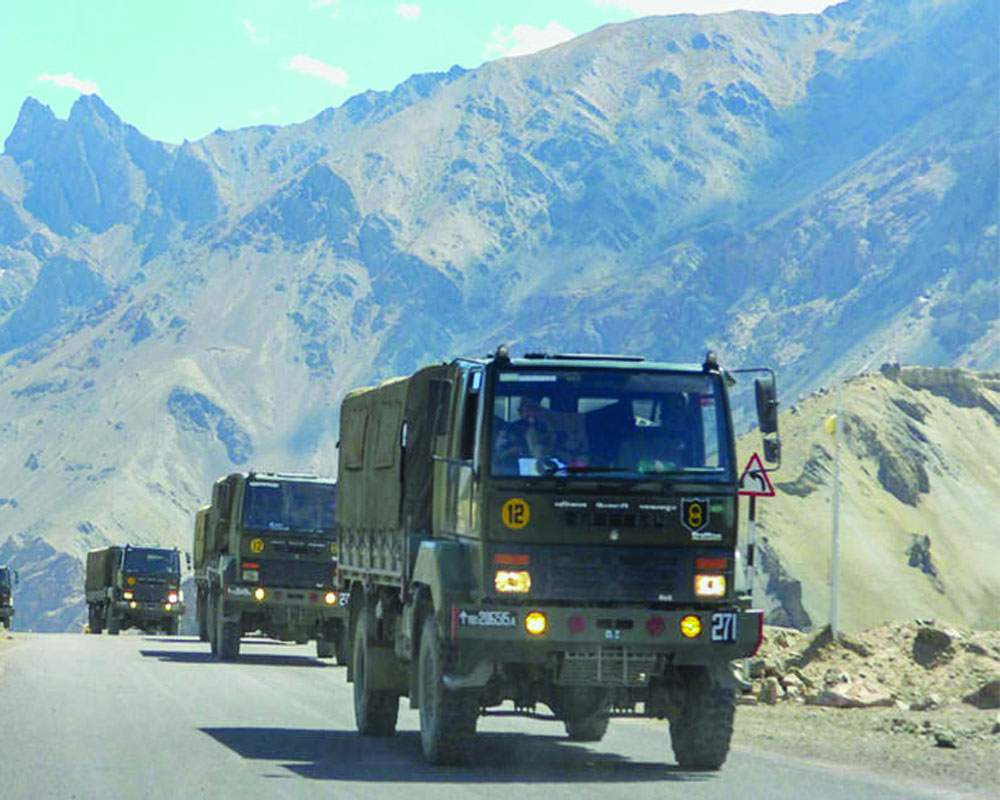 Any agreement with China, which is about a piecemeal disengagement, is unacceptable. Surrendering one’s trumpcard is a monumental folly

A disengagement deal on the Line of Actual Control (LAC) with China, whose ingredients have been leaked, is being considered by the Government. External Affairs Minister S Jaishankar mentioned it in mid-October as a confidential Chinese proposal and Army Chief Gen Naravane recently likened it to a work in progress. It apparently involves vacating the strategic Chushul heights on Kailash range — a critical bargaining leverage superbly created by the Special Frontier Force (SFF), which  must not be frittered away in a piecemeal limited disengagement for Chinese withdrawal from the Fingers area.

Defence Minister Rajnath Singh is speaking the obvious: “We need a strong military to deter aggression.” We have one but it can checkmate Pakistan, not China. Prime Minister Narendra Modi knows that due to economic recession, the modernisation of armed forces will be grounded. So he is boosting soldiers’ morale by celebrating Diwali with them, riding the Arjun tank and acclaiming his Government’s record in defence reforms. But defence allocation under his watch has been the lowest as a percentage of GDP, which has been declining since his Government came to power. Singh should be informed  that shastra puja (worshipping weapons) alone will not add to deterrence.

If a limited disengagement and not a full and complete disengagement and de-escalation is implemented, it will be at an extraordinary strategic cost. China has been insisting that Chushul heights be vacated as part of a partial disengagement limited to north and south bank of Pangong lake. Colossal confusion prevails about the exact contours of the withdrawal as to whether it will be across all intrusion points in East Ladakh or just the Pangong Lake region. The strategic heights gained by SFF must not be vacated as these are on the Indian side of the LAC and were in our possession in 1962. An infantry brigade fought on these heights but withdrew prematurely, first to Chushul and then in panic to Leh. India must not repeat the Himalayan blunder for painting political success after a pounding from the opposition for loss of territory. China has already pushed India into a corner by imposing unequal terms during the initial disengagement, which separated troops from friction points culminating in the Galwan clash.

The Indian Army was forced back from positions it held earlier in Galwan, Hot Springs and Gogra; buffer zones were created on the Indian side of the LAC even as the People’s Liberation Army (PLA) failed to faithfully disengage from all the flashpoints. The Chinese have refused to discuss Depsang, where it has intruded 18 km and blocked Indian patrols. On its part, the PLA has managed to creep forward towards its 1959 claim line and annexed territory. In the proposed disengagement plan, China wants vacation of Kailash range for withdrawal from the Fingers area.

What is incentivising India to de-induct from the commanding heights overlooking the PLA Moldo garrison and from where, on a clear day, one can see the Aksai Chin road that China has illegally constructed? It could be the difficulty of supporting a Brigade on and along these heights in the harsh winter to follow where temperature is already minus 30 degrees centigrade and will go down to minus 40 degrees centigrade. The snow will be different from what the soldiers are used to in Siachen, which has been made habitable and defensible over nearly four decades of occupation. If sustenance of troops is the compulsion, a smaller force can be kept and turned over as is being done on Saltoro Ridge in Siachen. Withdrawal from Kailash range should never be part of any limited Chinese proposal on disengagement.

The Chushul heights are a countervailing advantage in forcing  withdrawal from Depsang and becoming  the pivot of any tradeoff in an overall disengagement and de-escalation agreement, which is return of status quo ante, April 2020. PLA is occupying Black Top post close to the Mukhpari post on Kailash range. Chinese soldiers are conscripts, who normally do not man posts at an altitude of 17,000 feet. The Chinese are facing a greater degree of difficulty in their occupation of heights in areas near the Kailash range. The three-step withdrawal plan limited to both banks of Pangong Lake area reportedly consists of the following:

(a) Removal of heavy weapons from both banks of the lake

(b) Full vacation by PLA from North Bank in Fingers area, back to the original Finger 8. The Indian Army similarly will pull back to its permanent location at Dhan Singh Post near Finger 3. Area between Fingers 4 and 8 will be converted to  buffer zone (another buffer zone on Indian side).

(d)  A verification and monitoring mechanism has been included.

Apparently, a more authentic version of the selective disengagement was discussed on November 6 during the eighth round of military commanders’ talks, which were described by India as “candid, in-depth and constructive in which views were exchanged on all friction points along LAC in the western sector of India-China border areas.” It was also the first time that the two Generals held a one-on-one, which is very rare with Chinese interlocutors. The ninth round of the commanders’ talks is expected later this month so that withdrawals can begin by mid-December.

The Government relies on leaking information through its civil and military officials to test ideas. So while some newspapers have reported that disengagement is confined to the Lake area, North and South Bank, others have said it covers all friction points, including Depsang. In other words, it is a full and complete disengagement. With trust and faith gone with the wind after Galwan, fear is that once you pull out from the Kailash range, its re-occupation will not be easy given that terrain and PLA’s duplicity. The strategic heights have shifted the balance of military advantage and bargaining potential to India. In 2005, India came close to withdrawing from Siachen in an agreement with Pakistan. With complete breakdown of trust, Army Chief Gen JJ Singh said: “Indian Army will withdraw if ordered. But don’t ask it to re-occupy Siachen.” Since then any withdrawal from Siachen is enveloped in silence.

Two former Northern Army Commanders, Lt Gens HS Panag and DS Hooda, have said that vacating Chushul heights without full  restoration of status quo ante will be squandering a strategic asset. Any agreement with China, which is about a piecemeal disengagement, must be unacceptable. Nothing should be left to later or a separate phase of withdrawal. Surrendering one’s trumpcard ab initio is a monumental folly.