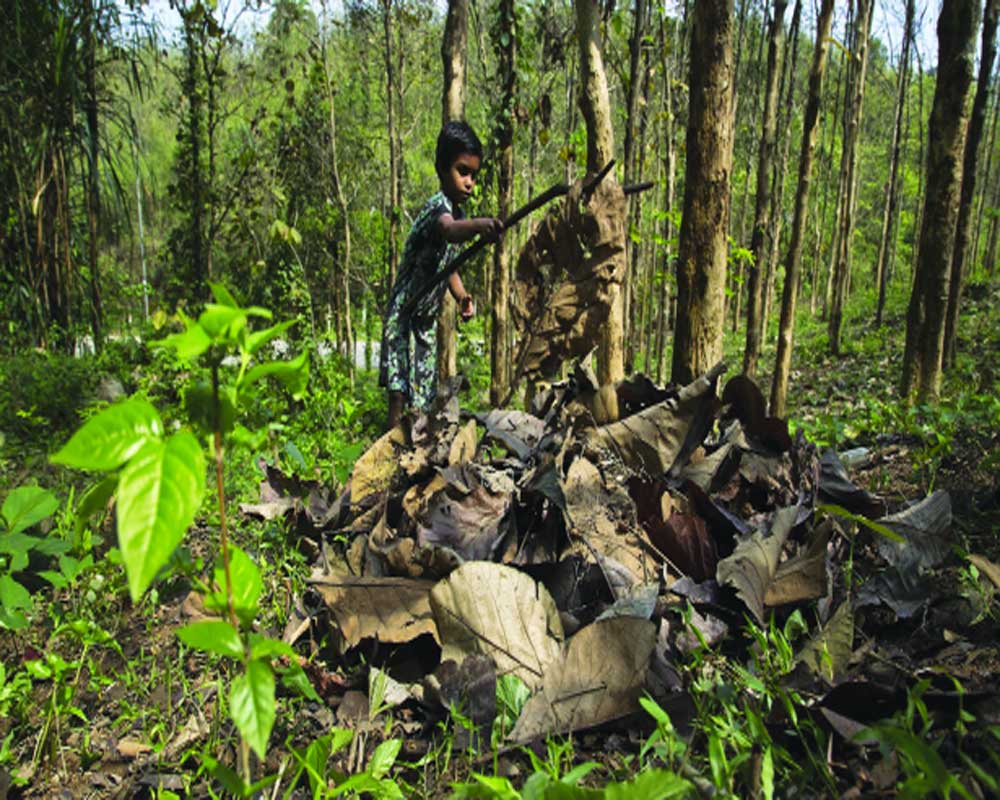 It is good that the Government is mulling over the suggestions of the EIA draft notification. Hopefully it will then shed some provisions that have sent alarm bells ringing

Felling a tree is murder. Felling an entire forest is genocide. People have argued that India has sufficient land under forests and there is no harm in felling some of them to make way for development, particularly when forests can be regrown elsewhere. They are grievously wrong. First, plants are feeling, communicating, mutually caring and benevolent living beings that need to be treated with respect and not cut down to suit human convenience. Second, planted forests can never be the same as the ones existing over the ages.

As to the first, Sir Jagadish Chandra Bose, who made path-breaking contributions to remote wireless signalling and micro-wave optics, also made pioneering and revolutionary contributions to the understanding of plant physiology and psyche. In a landmark development, he demonstrated that plants had feeling. He did it through an experiment at the Royal Society, London, in 1901, showing a plant quivering frantically under the impact of poison before dying. Bose, who laid the foundation of what has come to be known as plant neurobiology, also showed that plants had, like animals, a central nervous system with nerves radiating to different parts of the organism and capable of electrically coding stimuli and transmitting impulses from a nerve centre to terminal motor organs.

Bose held that plants were fully cognisant of changes in their environment and responded visibly to stimuli, including slight fluctuations in light caused by passing clouds. Also, the transmission of nervous impulses determined functions like growth, respiration and motor activity. He also observed spontaneous pulsatory movements in plants like heart beat in animals. Indeed, in his seminal paper titled, “Jagdish Chandra Bose & plant neurobiology” in the Indian Journal of Medical Research, Prakash Narain Tandon cites Bose’s speech in Guildhouse in London on June 30, 1929, in which he says, “In many other ways we are able to find that plant has a heart that beats continuously as long as life remains.”

Other researchers and scholars followed the trail Bose had blazed and plant neurobiology came to encompass the study of forests in different parts of the world. As Pradeep Krishen points out in his introduction to Peter Wohlleben’s The Hidden Life of Trees, leaf tissues transmit electrical signals when nibbled — just as humans do when hurt — to summon defensive compounds from within themselves and release chemical signals in the form of scent molecules to warn other plants of the impending danger and enable them to take defensive measures. Wohlleben himself cites the example of umbrella thorn acacias in the African Savannah which did not like giraffes feeding on them. In “mere minutes,” they started pumping toxic substances into their leaves to rid themselves of the herbivores, which got the message and moved on, but to trees about 100 yards away. The reason? The acacias emitted ethylene gas that signalled to neighbouring trees of the same species that danger was at hand.

Wohlleben further points out that trees “communicate by means of olfactory, visual and electrical signals.” Trees are social beings. Those belonging to the same species communicate with one another through an intricate network of fungal threads connected to their root systems by means of which they exchange carbon and other nutrients among themselves. This, Wohlleben says, “leads to the conclusion that forests are superorganisms with interconnections, much like ant colonies.”

Wohlleben then asks: “Why are trees such social beings? Why do they share food with their own species and sometimes even go as far as to nourish their own competitors?” Saying that the reasons are the same as in the case of human communities, he writes, “There are advantages of working together. A tree is not a forest. On its own, a tree cannot establish a consistent local climate. It is at the mercy of wind and weather. But together many trees create an ecosystem that moderates the extremes of heat and cold, stores a great deal of water and generates a great deal of humidity. And in the protected environment, trees can live to be very old. To get to this point, the community must remain intact, no matter what. If every tree were looking out only for itself, quite a few of them would never reach old age.”

Besides what forests do for individual trees they comprise, they contribute in critical ways to human survival. They induce rainfall. They capture carbon dioxide from the atmosphere and transform it into biomass through photosynthesis and accumulate it in the form of biomass, deadwood and litter and in forest soils. Deforestation and harvesting fires, besides respiration and oxidation, release carbon from forests and increase atmospheric pollution. Further, deforestation destroys the habitats of wild animals, which not only enhances the rate of extinction of species — which stands roughly at an alarming 3,000 of them every year globally — but increases human-animal conflicts.

The argument that all the losses listed above can be compensated for by the planting of new forests does not hold. The links among trees that can lead to mutual nurturing can only be established in undisturbed forests. The roots of planted trees are irreparably damaged, which, Wohlleben points out, seems to “make them almost incapable of networking with one another. As a rule, trees in planted forests behave like loners and suffer from their isolation.” In his introduction, Pradeep Krishen cites the example of sal trees, which are known as gregarious because they grow together in large numbers and die in isolation, unable to communicate with others of their group.

In her chapter, titled “Ancient Forests and Sacred Groves” in the anthology Critical Themes in the Environmental History of India edited by Ranjan Chakrabarti, Nanditha Krishna writes that recognition of the “importance of trees and forests’ go back “to India’s earliest civilisation.” She further states that the Rig Veda’s Oshadhi Sukta addresses plants and vegetables as, “O Mother” and says “Hundreds are your birthplaces and thousands are your shoots.” The Rig Veda, she points out, very specifically states that forests should not be destroyed (8.1.13). The Yajur Veda speaks of the ill-effects of deforestation.

In the Chhandogya Upanishad, the sage Uddaloka Aruni asks Svetaketu, who wants to know about the self, to bring the fruit of a Nyagrodha (Banyan) tree and then asks him to break it. That done, the following dialogue ensues, “What do you see?/Some seeds, extremely small, sir/Break one of them/ It is broken, sir?/What do you see?/Nothing, sir.”

The relevance of all that has been written above has to be seen in the context of the draft of the new Environment Impact Assessment Notification, some of whose provisions have been causing serious concern. One of these lays down that projects can receive clearance post-facto, ie, a project operating in violation of the EPA can now apply for clearance. This is despite a Supreme Court order on April 1, clearly stating that such clearances are contrary to law. Also worrying is the listing of a number of projects as being outside the purview of the EIA, including any the Government may label as “strategic.” Not just that, the draft says that no information on “such projects shall be placed in the public domain.” The list of exempted projects also includes all concerning inland waterways and national highways. The concern triggered by this is matched by the provision that construction projects of up to 150,000 square metres in area shall be outside the EIA’s bounds.

It is good that Union Minister Prakash Javadekar said on August 10 that the “thousands of suggestions” received in respect of the Environment Impact Assessment (EIA) notification would be considered before the final draft is made. One hopes that the process leads to the shedding of some provisions which have sent alarm bells ringing.

(The writer is Consultant Editor, The Pioneer, and author)