India is choking its rivers with sewage

India is choking its rivers with sewage 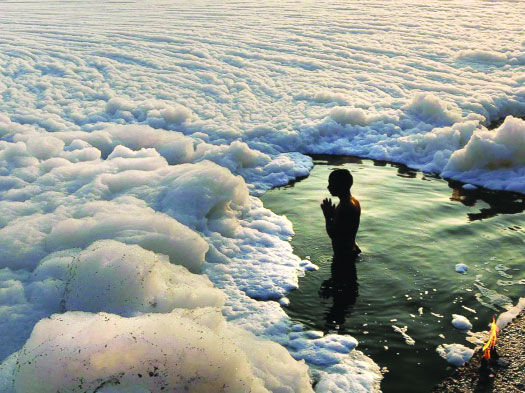 While crossing the Kalindi Kunj bridge over the Yamuna in Delhi, have you ever wondered about the reason for the white, frothy foam floating on the river’s surface? This toxic foam, that is usually seen in abundance in July, prompted the National Green Tribunal (NGT)-appointed special committee to instruct the Delhi Pollution Control Committee (DPCC) to submit a report to it on the issue. The report concluded that sewage flowing into the Yamuna contained an abnormally high amount of detergent. This, coupled with the churning of the waters at the barrage, led to the formation of the toxic foam on the river’s surface. The problem was compounded by the presence of traditional laundries along the banks of the river and 23 drains from Delhi directly discharging sewage containing phosphate detergents and industrial effluents into it.

The two-member Yamuna monitoring committee got this information with the aid of the nine quality monitoring stations of the DPCC along the banks of the river. Now that the cause for the toxic foam on the river’s surface has been found, it is for the Government to convert the findings of the report into verifiable and meaningful action.

Sadly, rivers in urban India have always been the dumping ground for sewage, effluents from industries, riverside laundries and tanneries, ashes of the dead and even bodies of those who are not cremated. The Yamuna is no exception and has endured pollution of all kinds, for centuries. The most visible form of a river lodging a silent protest against pollution is the appearance of the toxic foam.

The Bellandur Lake in Bengaluru is another such water body that has been in the news for spewing excessive white, toxic foam. The pollution level in Bengaluru’s largest lake is an example of the apathy and inefficiency of the Bangalore Water Supply and  Sewerage Board in managing sewage disposal. To make matters worse, the dumped chemicals and oil in the lake tend to float to the surface and also catch fire intermittently, thus adding to air pollution. This level of pollution in our water bodies raises pertinent questions about the role and efficiency of Sewage Treatment Plants (STPs) that are primarily installed to treat the water and ensure that the pollution remains in a controllable range in our water bodies and rivers. In 2014, the Ministry of Environment and Forests stated that 70 per cent of India’s STPs were dysfunctional and the main reason for this was the high cost of maintenance and the ever-growing gap between the sewage to be treated and the capacity of the STP to handle it. Six years down the line, the situation is not any different. The facts present a grim picture and a break for India’s long-suffering rivers seems far off as nearly 70 per cent of the sewage treated in India does not meet the acceptable standards and there is a 78.7 per cent gap between sewage generation and the STP’s installed capacity to treat it. Even if the additional 1,742.6 million litres a day (MLD) of sewage treatment capacity is factored in, that is either in the planning stages or under construction, there will still be a gap of 72.7 per cent in the sewage treatment capacity in the country.

The situation is expected to get worse, as according to a report by the CPCB, sewage generation in India is 61,000 MLD or enough to fill 24,800 Olympic-sized swimming pools daily. Against this, we have a paltry sewage treatment capacity of 23,277 MLD.

Adding to the problem is the absence of a centralised sewerage system that allows for correct channelling of sewage output. The 12th Five-Year Plan Report on Urban Development highlighted that a shocking 4,861 cities and towns in India do not have a basic central sewage system. Large cities such as Bengaluru find themselves in this list as nearly 50 per cent of the city’s households do not have a proper sewage system that is connected to a central system. This naturally means that these households channel their sewage to the nearest water body.

The impact of all this pollution on water bodies is devastating to say the least. Aquatic life and biodiversity suffer irreversible damage and so do humans who are dependent on the water bodies for their livelihoods.

There is an urgent need for the Government to set up special action committees that can look at the underlying causes for the inoperable STPs and those that require repairs to be functional again.

To save our rivers, there is a need to attach top priority to the establishment of new STPs that can increase the current 37 per cent treatment capability to at least 80 per cent of the sewage generated. This can be done by opening the STP sector to entrepreneurship platforms and providing the necessary technical expertise, funding and subsidies on encouraging terms. This will serve the twin purpose of creating employment-generating enterprises, besides also narrowing the gap between sewage generated and sewage treated. India needs an action-oriented initiative to turn around the urban rivers and water bodies that are plagued by pollution such as the toxic white foam seen on the Yamuna’s surface. Till such action is taken the white foam on our rivers will be a reminder that we have failed our rivers.