Is India a gardening State?

Is India a gardening State? 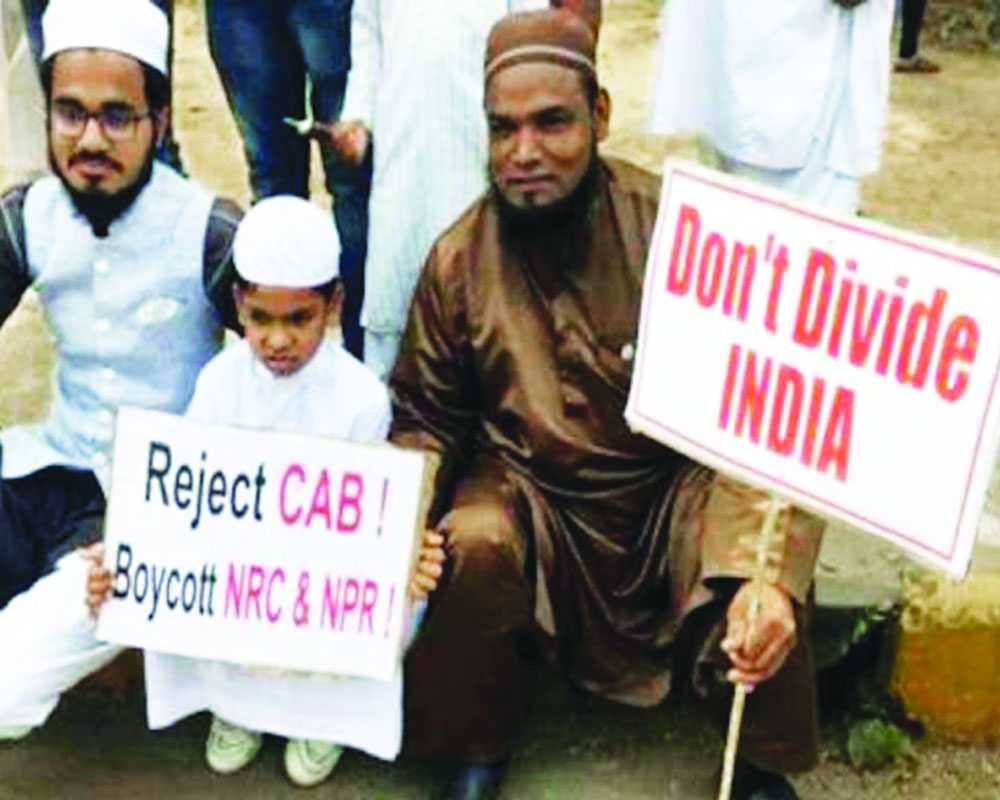 The CAA, by choosing some and excluding the other has performed the role of ‘gardening’ within the contours of Indian citizenship

Home Minister Amit Shah assured the Upper House that no existing citizen will be tagged “D” or doubtful during the course of collection of information under the National Population Register (NPR). The provisions of the Citizenship  (Registration of Citizens and Issue of National Identity Cards) Rules, 2003 allow for marking a doubtful citizen, verification of documents and even striking off someone’s name from the National Register of Indian Citizens (NRIC), if found doubtful by officials vested with discretionary powers at local, State and national levels. Though Shah has also assured that no such verification on the data provided will be undertaken, yet letters of law create some confusion in the larger public. In almost a similar vein, the Union Government kept assuring the country’s Muslim minority populace that no one would lose their citizenship under the newly-enacted Citizenship Amendment Act (CAA). The fact that such assurances have to be given demonstrates the anomalies and inconsistencies of such laws like the NPR-NRC-CAA. While Shah assured a certain application of mind, it leaves wide open the discretionary powers granted in laws pertaining to the NPR-NRC-CAA.

In a recent article countering the critics of CAA, noted legal luminary Harish Salve argued that with the passage of CAA, Muslim illegal immigrants remain liable to be deported to their country of origin. Salve argued that the criterion of “intelligible differentia” makes CAA rational as it includes only the “six” religiously-persecuted minorities from the three neighbouring countries of Pakistan, Bangladesh and Afghanistan. This is how CAA, according to Salve, fulfils its objective of granting citizenship to those religiously-persecuted refugees who are forced to come to India, leaving behind their homes. In effect, the CAA draws a line between those who are to be naturalised and those who are liable to be deported. It opens up Indian citizenship to a rationally-classified set of people, while it closes it to a set of people who do not fit into this classification. Salve emphasised on this methodological distinction that CAA draws and justified it on heuristic grounds of profiling the “illegal immigrants” on the basis of their religious identity.

What connects Shah’s commitment of non-victimisation in the NPR and Salve’s justification of the deployment of “intelligible differentia” in the CAA is the common idea of taking the next step without stopping to think about what is going to be the next course of action in case anyone is affected. Salve does not deny the fact that Muslim illegal immigrants remain liable to be deported as CAA would not include them. Many commentators including Mukul Kesavan pointed out that the criterion of differentiation that CAA uses is not self-consistent, as it excluded worst religious persecuted such as Ahmadiyyas, Shiyas, Rohingiyas, Tamils and Tibetan Buddhists from its purview. Further, as per Kesavan, within the intelligible criterion, CAA creates a sub-class of only three neighbouring countries and then a further sub-class of “select” religiously-persecuted minorities.

Salve’s advocacy misses the forest for the trees and trees for the forest. It misses the general point of India’s commitment to those who come to it due to fear of civil or any other kind of disturbances, as stated in Section 19 (4) of the Indian Independence Act, 1947. Premised on such a consequential follow-up of India’s independence, the Nehru-Liaquat pact guaranteed settlement of the displaced minority in their respective country of choice until the last day of 1950. Recognition of “minority rights” irrespective of religion has been the very bane of this early legislation and bilateral pact. The same spirit is reflected in the Immigrants’ (Expulsion from Assam) Act, 1950, that excluded any person displaced due to fear of civil disturbances from the definition of “illegal immigrant.” Subsequently with the passage of the Citizenship Act, 1955, Section 5 and 6 of the Act provided for naturalisation of immigrants from erstwhile territories of undivided India. Therefore, it is argued that the CAA does not do anything extra that cannot be taken care of by the existing Citizenship Act, 1955, with respect to any class of immigrants. Or rather, the classification and sub-classes drawn up with the CAA can all be given due coverage and even their citizenship could be fast-tracked, depending on the urgency. A case in point is singer Adnan Sami’s citizenship did not require CAA, or many other cases of erstwhile Pakistani or Bangladeshi citizens naturalised by due process prescribed under the Citizenship Act, 1955.

As CAA does not serve any special purpose except naming some religious groups as persecuted and eligible to apply for Indian citizenship, it is intriguing to note that Salve justifies it on the ground that demographic distortions caused by Bangladeshi immigrants could be restored by it. This, to state the obvious, links CAA with a procedure of determination of citizenship by NRIC and NPR that can create a sub-class of doubtful citizens by suspending their nationality and by treating them as a class of illegals. Indeed most critics of CAA are worried about this plight of being subjected to undue suspicion on a section of Indian citizens as Bangladeshis, based on ethno-racial profiling and dual filtering through NPR-NRC. The affidavit submitted by the Centre in the Supreme Court in the cases filed against CAA makes it further clear that the power of exclusion of immigrants arises from “sovereign” power of the Indian State by which it is entitled to have its own immigration policy. This power of exclusion of certain class of immigrants in CAA, as per the affidavit, is the domain of the Parliament, in terms of its direct linkages with the State security and foreign policy. The affidavit further states that neither such matters of national security and immigration policy can wholly be subjected to judicial review, nor could these matters be interpreted even within the ambit of fundamental rights. As a first, the affidavit also separates “fundamental rights” from the scope of interpretations allowed by international covenants and protocols.

Reading together Salve’s justification for only a sub-class of immigrants as eligible to be covered in CAA and what the affidavit of the Centre stated, it is a matter of concern whether such stipulated sub-classes of inclusion go against the letter and spirit of part-III of the Constitution. It is a matter of due consideration before the Supreme Court that the constitutional foundation of unity and equality between all classes of citizens of India, as stated in part-III, can be abridged and violated by identifying a special class and granting it certain rights. Assumption of the power of exclusion to discriminate between classes who are affected by the legislation is also a grave concern. If the power of exclusion by the Parliament further leads to abridgment of fundamental rights to equality and right to life of a certain excluded class, constitutional morality prohibits such exclusion. Indeed CAA legalises the prohibited categories of religion under Article 15 and makes it a basis for consideration for citizenship for a special class of non-citizens hailing from foreign countries.

As India is not yet a signatory to the Refugee Convention and Protocol, does this entitle it to draw a distinction between classes of asylum seekers and refugees? This is a grey area in which the current formulation of the CAA excludes Muslims. Salve justifies it by saying that as there is a settled political boundary between India, Pakistan, Bangladesh and Afghanistan, so Muslim immigrants from these countries, other than India, cannot claim citizenship and they are liable to be deported if they entered India illegally without valid papers. In contrast to immigrants from six religiously-persecuted groups, a Muslim immigrant from these countries would now become immediately illegal, because of his/her religion. This difference of entitlement in India, for the first time, sows seeds of selective preference. This runs contrary to the Citizenship Act, 1955 that keeps the process of naturalisation open to people originating from undivided India. As stated by the affidavit, it is true that the Citizenship Act, 1955 allows the State to decide who should be admitted to naturalized citizenship but religion has not been made a reason for anyone’s rejection. With CAA, religion could be taken as a factor for rejection of an applicant’s citizenship, as CAA gives a power of exclusion of a special sub-class to the State, as per the affidavit. Of course, the State will have an application of mind in not victimising someone as assured by the Home Minister in the case of NPR.

Couldn’t framing of such important laws related to immigration be more coherent and non-discriminatory? What stops the State from framing religiously un-biased laws that rise above religiosity and champion India’s pluralism, even in case of non-Indian citizens?  As stated by political philosopher Charles Mills’ book Racial Liberalism, sacrificing constitutional impartiality in dealing with different races would result in supremacy of dominant races. Defending such dominance is what Mills called “racial liberalism.” CAA, as a consequence, might allow for such “racial liberalism” towards some classes, while excluding certain other classes of immigrants.

Even better is the description given by sociologist Zygmut Bauman, who considered modern Statecraft of choosing certain people over the other on certain consideration as a “gardening State.” The CAA, by choosing some and excluding the other has performed the role of “gardening” within the contours of Indian citizenship.

(The writer is a legal philosopher and a political analyst based in Shillong.)