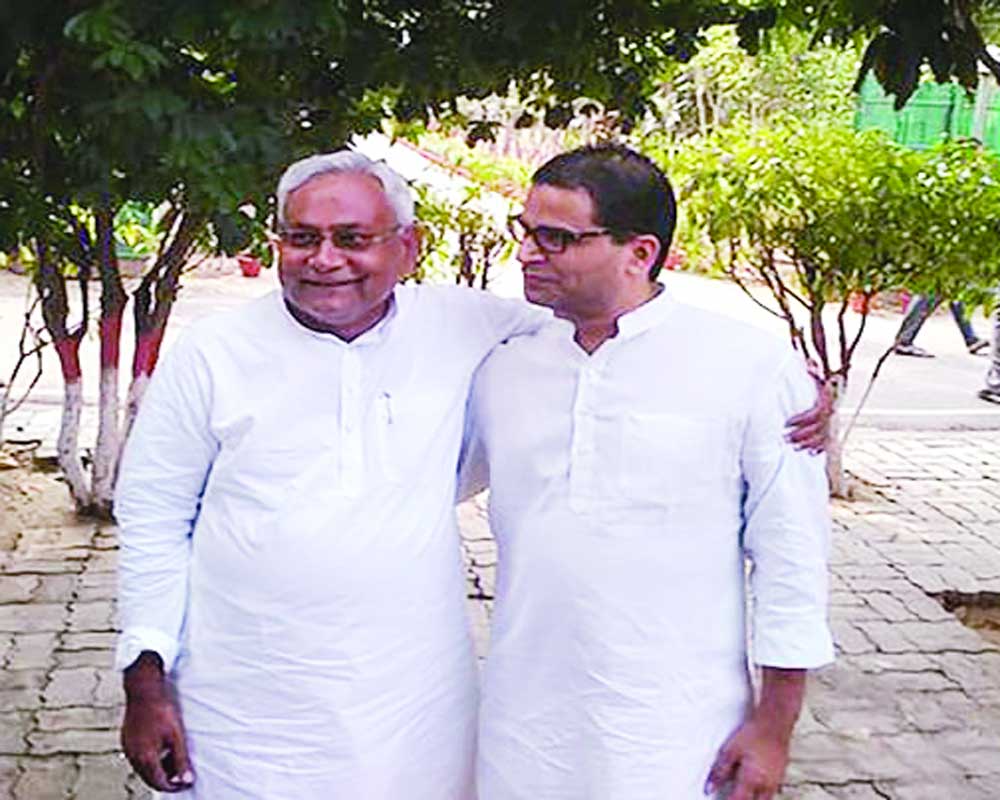 As Nitish expels Kishor and Varma, he has a tough job rescuing lost space for himself than appearing as BJP’s tool

Usually, rivals end up pushing each other’s cupboards so that the skeletons tumble out in election season. But if the rumblings in the Janata Dal (United) are anything to go by, then the family war is now a raging fire with its leader and Bihar Chief Minister Nitish Kumar expelling its top leadership crucially close to the State Assembly elections. JD(U)’s national faces — vice-president Prashant Kishor and spokesperson Pavan Varma — have been shown the door for asking questions of Kumar about the extreme nationalist politics of his ally BJP and the extent of the party’s continued association with it. Considering that both were once considered trusted aides of Nitish, who risked dissension within his State unit to empower them and both of whom contributed to his success in the 2015 Assembly elections, one wonders if more is to be read into this than the ideological clash over the BJP’s controversial Citizenship Amendment Act (CAA). Nitish, who has proved himself as a shrewd politician, is known to survive all kinds of odds. This time, however, that job is a tad too difficult because he seems compromised by circumstance, unable to snap his symbiotic link with the BJP so close to the State polls, and being forced to spell out his views on citizenship of minorities. Perhaps, Nitish was looking for a way to trim the ambitions of Kishor, who, as an electoral strategist for other parties, was becoming too big, positing himself as heir apparent and even dictating terms to the JD(U) old guard. Beyond a point, Nitish could not overlook veterans who have been working with him like Rajiv Ranjan Singh, Ramchandra Prasad Singh and Bashishtha Narayan Singh. Neither could he ignore the fact that Kishor had aligned with several other Opposition parties (Aam Aadmi Party, Trinamool and Shiv Sena) and while dictating their strategies, wasn’t always circumspect about the JD(U)’s own imperatives. In fact, Nitish was upset when Kishor publicly criticised him for walking out of the federal front or the mahagathbandhan and realigning with the BJP. The CAA criticism was only the last straw. Kishor, who was once seen as a BJP plant has, in fact, now emerged as a cohesive voice of the Opposition and could well forge an alternative front at the national level by virtue of being the architect of its constituents. And Nitish knows, like all other federal parties now, that he can be relevant by only consolidating his home ground. He also knows his strengths. Even assuming that he continues with his support to CAA and the Muslim vote consolidates around Lalu Prasad’s Rashtriya Janata Dal (RJD), his voter base is still substantial and loyal. Extremely Backward Castes (EBCs) account for 30 per cent of his votes, the Maha Dalits for 15 per cent and women, whom he won over with his landmark 2016 decision to impose prohibition in the State, are quite a sizeable number still. Some youth are with him. These easily comprise 45 per cent of voters in Bihar. Besides, there is some leftover halo of being a committed performer and administrator that can be reinvested as leadership material. It is precisely for this reason that even the BJP is ready to go with him as the chief ministerial face.

Yet, the going for the BJP and Nitish will, henceforth, be uneasy. The BJP is breathing heavy on Nitish, particularly after the JD(U)’s dismal solo performance in the Jharkhand Assembly polls. Although they have negotiated a 50:50 seat-sharing formula in principle, the BJP has the upper hand. Nitish has burnt bridges with RJD so badly and has distanced himself from federal front leaders to such an extent that he has no other option but to be with the BJP. How much he can bargain within that is questionable considering the BJP now has “first party” ambitions in Bihar and post the Lok Sabha elections last year, where it swept the State, thinks it is residually helping its junior partner improve its individual numbers. Of course, given the latest round of drubbing in the Assembly elections, the BJP, too, is banking on Nitish to deliver in Bihar, save its face and dispel the notion that it cannot work with smaller parties. The dependence on numbers has become all the more important considering the warts that dot Nitish’s performance graph over the last couple of years —  Patna floods, the encephalitis deaths, the accumulation of prohibition-related cases in courts and the State’s dismal rank in the Sustainable Development Goals index. Besides, though he has supported the CAA, he has categorically refused to comply with any kind of profiling-based census. Can he rescue his and the JD(U)’s credibility or end up just being the BJP’s winning tool? For somebody who has moulded himself as a conscientious politician, both Kishor and Varma have, in their exit, left a moral albatross around his neck, one that embodies loss of values to naked ambition.