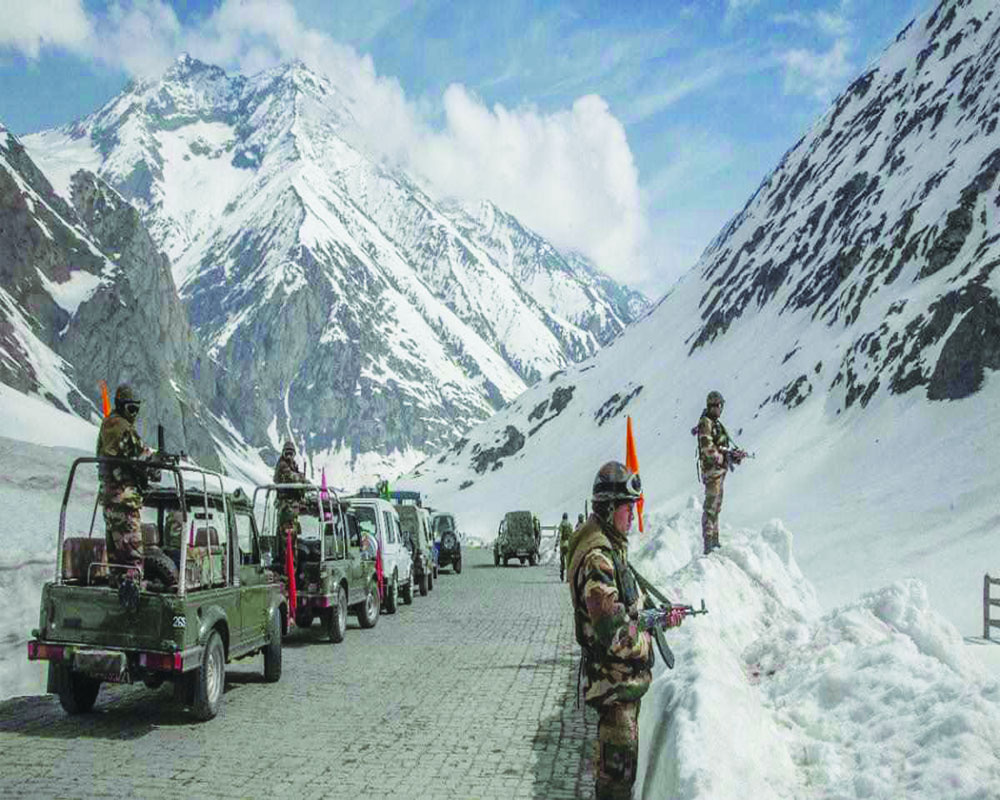 The 870-km Line of Actual Control (LAC) in East Ladakh is now in a state of stalemate after China gobbled up Indian territory. The prospects of any disengagement by China’s People’s Liberation Army (PLA) are receding even as Beijing has reportedly created a model village intruding into Bhutanese territory near the disputed Doklam plateau. Last week, Defence Minister Rajnath Singh was the Government’s senior-most Minister at the prestigious Hindustan Times Leadership Summit that was held virtually this year. What a disappointment he was! During the Q&A, he kept dodging the questions with vague answers on the state of play along the LAC that was tantamount to suppressing information on the Chinese aggression. To his credit though, he did pledge that the Modi Government will not allow an inch of land to be grabbed or let the ground situation change unilaterally when both have become fait accompli.

On whether Rafale was a game changer, he skipped the question, saying that he would let experts answer it, though he did travel to France to do a “shastra puja” while inducting it into the IAF. In sharp contrast, while dealing with Pakistan, he was a tiger. That, in brief, is India’s tragic two-front predicament – fragile and unsustainable, given the absence of a strategic vision that has been compounded by the economic downturn.

In mid-October, the Chinese had made a conditional proposal for a limited disengagement from north and south banks of Pangong Lake, asking India to vacate Chushul heights on Kailash range first in exchange of their withdrawal from the Fingers area. Apparently, India either rejected it or sought clarification, considering the strategic utility attached to the Kailash range. During the ninth round of integrated civil military dialogue, there was no word from China as India is keen that PLA returns to its original pre-May positions. That clearly is not happening. China watchers have reported that PLA commanders have had a rethink on the Pangong Lake – a specific disengagement proposal, which reflects a perceived PLA weakness, following the Special Frontier Force’s occupation of commanding heights overlooking PLA assets. Further, PLA border guards and military, who are not properly acclimatised and accustomed to occupying posts on the LAC and on heights opposite the Kailash range, are likely to confront severe “winterisation woes.” The strategic advantage gained by India through the pre-emptive commando action in August is well established. The Chinese feel that they can live with it as they know India will not exploit the military advantage. Still, the Indian Army’s vast experience in Siachen, Kargil and other high altitude posts gives it an advantage over the PLA. Both sides are substantially deployed on the LAC for the first time and will face extreme weather problems.

According to high-resolution satellite maps from MAXAR Technologies, hardened ammunition bunkers have been constructed 2 km from Sinche-la Pass on the Bhutan-China border, which are connected to an all-weather-road that stretches 5 km across the Doklam plateau. A village named Pangdon has come up 2 km inside Bhutan, which is connected to a 9 km track adjacent to Doklam on territory that Bhutan claims. A September 2020 study by STRATFOR, the world’s leading intelligence and geo-political platform, says that after the Doklam crisis in 2017, when China was forced by Indian troops to stop constructing a road on the disputed land, it was compelled to double its military infrastructure, including helipads and air bases. After the Doklam standoff was defused, the Chinese merely suspended road construction for a few months and later resumed building the road towards Jampheri Ridge in Bhutan but not on the disputed India-China-Bhutan trijunction that India had blocked. The study says that the PLA military activity is camouflaged by creating civilian projects near LAC, which can double up for military use and these areas are off limits for the local population. This latest intrusion is near Torsa river on Doklam plateau, which is an Indian red line.

The Bhutanese Ambassador to India, Vetsop Namgyel, said: “There is no Chinese village inside Bhutan. Satellite images show some settlement near the standoff point, Doklam. The village is not on the Bhutanese side.” A Government source said that we would come in only when the PLA intrudes and leave Bhutan to handle civilian intrusions. The Chinese Government television network producer Shen Shiwei was the first to show the village but later removed it. The Chinese have mastered the art of keeping military intrusions disguised as civil settlements and have done it in Nepal as well. The Indian Army’s gateway Doklam post must keep an eagle eye as it will be the first responder if the PLA crosses the red line again.

Clearly, the Chinese are creating new pressure points on the LAC as India starts demonstrating its options in hand, which it can enlarge and militarise as part of the progress in Indo-Pacific strategy, especially in the Indian Ocean Region. As India is seriously outmatched along its northern borders and the LAC, it is working on enhancing its maritime deterrence focussed on China’s Malacca dilemma. Every day, six to seven giant Chinese tankers sail through the Indian Ocean carrying 10 million barrels of oil. The challenge for India is in making the Chinese feel the heat of their Malacca dilemma through a countervailing strategy, in  which escalation can be managed.

Despite the Government’s whitewash of PLA intrusions, some lessons, not new, are evident: Bolstering early warning and surveillance of PLA activities with real time intelligence from US, now that the four foundational agreements have been signed. This will stop our forces from “being surprised.” We must monitor Chinese behaviour as distinct from their military activities and occupy commanding heights pre-emptively. Galwan was not held and had it been occupied, it would have provided an additional bargaining chip. Counter intrusions should be swiftly executed as was done in 2013 at Chumar to offset  the Depsang encroachment. The Chinese are firmly ensconced at Depsang again and are refusing to budge.

Last month, President Xi Jinping asked the PLA to be battle-ready. This month, he urged the PLA to transition from battle readiness to winning the war. India’s self-inflicted LAC injuries are being camouflaged by a Government blessed with an overwhelming political mandate but it still won’t allow the LAC issue to be discussed in Parliament freely. Nehru, the former Prime Minister that this Government trashes, led a flourishing debate in Parliament on the Aksai Chin hara-kiri. Modi is one of the most charismatic and performance-proof Prime Ministers India has had. He too has been tricked by the Chinese and misled by his civilian advisors into letting the guard down and creating capability deficit by painting a no-war setting.