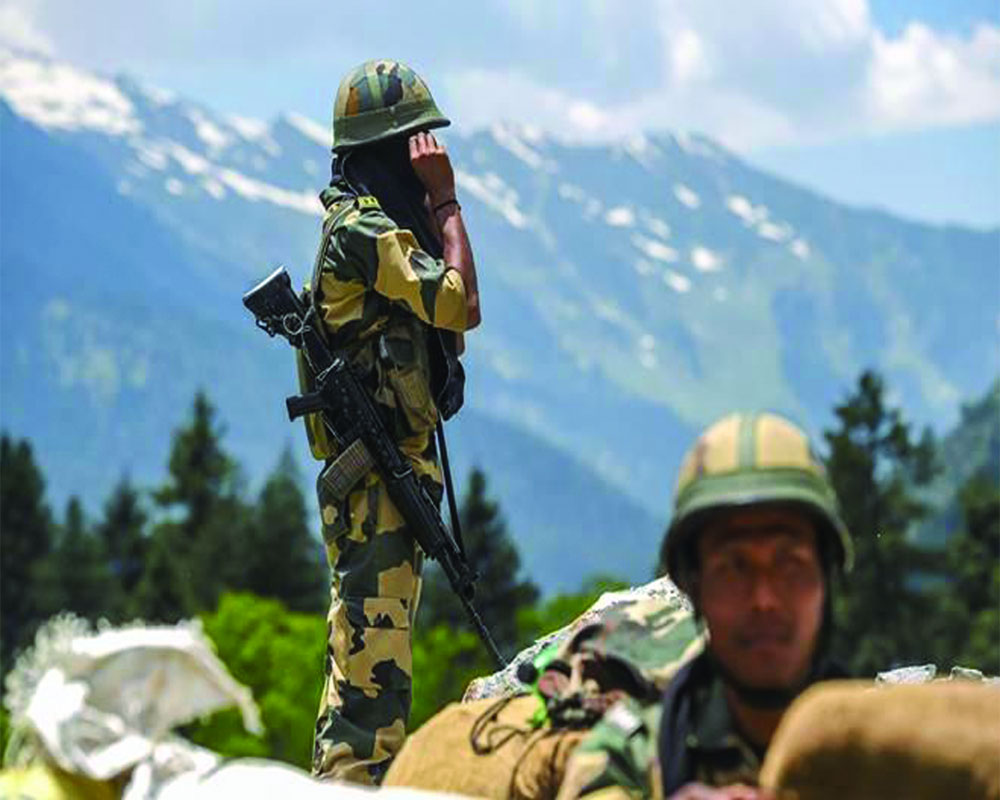 One hopes the Prime Minister learns from past events and chooses a course of action that’s in the nation’s interest. He must understand that the Army retains an edge over the PLA

At the turn of the 20th century, George Santayana, Spanish philosopher, writer and essayist,   wrote, “Those who cannot remember the past are condemned to repeat it.” We Indians possess a unique ability to wax eloquent on our civilisational heritage and yet remain remarkably ignorant, or pay little heed to, or learn from events that have occurred in the not too distant past. There must be something terribly wrong with our psyche that allows us to repeatedly condone Chinese bullying over border matters as it was recently done in eastern Ladakh. Undoubtedly, without any deep introspection or corrective action, our ability to break this ever-tightening squeeze is bound to fail.

We seemed to have learned nothing from the manner in which former Prime Minister Jawaharlal Nehru’s strong advocacy of the principles of “Panchsheel” crashed and burned, taking him along with the debris of the reverses suffered during the Sino-Indian conflict of 1962. Undoubtedly, he was spurred on by the belief, however fanciful, that the military was an unnecessary burden on a poor country like ours. It did bring us to our senses, though given our limited attention, it lasted for around a decade. During this period, much attention and expenses were showered to rapidly enhance our military capabilities. The fruits of which we saw in full measure not just in the manner in which Pakistan was brought to its knees in 1971 but even earlier as Chinese aggression was squelched at Nathu La, Sikkim, in 1967.

However, the simple lesson — that a powerful and capable military is what keeps the wolf, in our case the dragon, at bay — was soon forgotten as former Prime Minister Indira Gandhi and those who followed in her footsteps immersed themselves in domestic politics. For them, an eviscerated Pakistan was no longer a threat. Surprisingly enough, despite all that had occurred, the threat emanating from China was either ignored or just wished away. To the political establishment, all that mattered most then, and which has continued since, was their grasp on power and the ability to retain it. Thus, every move was made with that one sole intent, no matter what the means or cost, often even at the expense of national interest. The result of this was the rise of religious and cultural fundamentalism and fissiparous tendencies within. Our military was always there, ever willing to pull the fat out of the fire, no matter what the cost. This focus on combating and attempting to extinguish the fires of insurgencies in the north and the east kept the military occupied. This at a huge cost to its conventional warfare capabilities.

Ironically enough, the subsequent nuclearisation of the subcontinent added to the perception, especially among our politicians, that conventional militaries were becoming increasingly redundant. The possibility of conventional wars being fought among nuclear-armed adversaries appeared to be progressively more remote. In fact, the Kargil conflict of 1999 appeared to confirm these perceptions. Neither side was willing to escalate the conflict either in terms of space or the resources utilised.

This line of thought resulted in the military being confronted with falling budgets, mandatory troop cuts and the drying up of new weapons and equipment. This left a large void within the armed forces, making it increasingly dependent on obsolescent weapons and equipment and having to deal with critical shortages in personnel, ammunition and other warfighting stores. A natural corollary to this sharp decline in the military’s importance was that it provided an opportunity to the politico-bureaucratic nexus to cut it down to size. Tampering with institutional processes, interference in selection boards and systematic use of Central Pay Commissions to reduce their pay and perks became the norm. A deeply divided military was left to constantly battle against all odds. Fortunately, as was the case even in the darkest days prior to the 1962 conflict, middle officers and the rank and file as well as the combat units remained relatively untouched.

The UPA era left us with a governing coalition that was more intent on financial skullduggery than nation-building. It ignored Pakistani transgressions in Jammu and Kashmir. It went to the extent of not even attempting a credible response to the dastardly terror attack on Mumbai. Interactions with China continued along a well-worn path that allowed the governing coalition members to bury their collective heads and ignore all provocations on our borders.

All of this abruptly changed with Prime Minister Narendra Modi assuming charge. He attempted to revitalise our international standing using a potent mix of grandiose vision, theatrics and posturing. However, what the international community failed to realise was that every initiative undertaken by him was aimed more to impress the domestic audience. In effect, nothing changed as despite all the talk and posturing, the military continued to see a downward spiral, accelerated by Modi’s need for an ideologically compatible and compliant military leadership.

Thus, while robust retaliation against Pakistani interference in Jammu and Kashmir became the norm, given our conventional superiority, we continued to treat China with kid gloves. The Doklam standoff was an outlier in this regard, reportedly brought on because of the intransigence and resolve shown by local commanders unwilling to be bullied by the People’s Liberation Army (PLA) or our Army headquarters. It forced the Government to walk the talk to preserve Modi’s image of being a robust, strong and powerful leader. He was obviously able to persuade President Xi at the Wuhan informal summit that this image was only for domestic consumption. He quickly agreed to a vaguely worded statement that was blandly referred to as the Wuhan consensus. Two visible signs that emerged from this agreement were: First, our refusal to act as the Chinese systematically occupied much of the Doklam plateau and other territories that belonged to our ally, Bhutan. Second, on their part, the Chinese seemed to have kept to their side of the bargain as no further incidents on the LAC  marred Modi’s run-up to the general elections.

It was the unexpected and largely unprecedented success at the hustings and the subsequent support it received for its actions on abrogating the special status of Jammu and Kashmir that made the BJP cocky. Home Minister Amit Shah made the mistake of proclaiming in Parliament his Government’s intent to recover not just Pakistan-occupied Kashmir but also the Aksai Chin from Chinese occupation. A grievous error of judgment that the Chinese did not take kindly to, especially since they were already upset with our attempts to enhance border connectivity along the LAC.

From what has since transpired, one can safely conclude that the bonhomie displayed at the Mamallapuram summit was purely for public consumption and President Xi Jinping had probably already made up his mind to teach us a lesson and bring Modi down a peg or two. The PLA’s actions to change the LAC in eastern Ladakh undertaken at the beginning of the campaigning season is a clear pointer in this regard.

This despite the Central Government’s earlier studied silence to the allegations made in Parliament by its own MP from Arunachal East, Tapir Gao, that by December 2019, “the Chinese had occupied more than 50-60 kilometres of Indian territory.” This included the Longju sector. That we reportedly moved the Indian Army positions back suggests connivance on the part of the Union Government.

For those unfamiliar with the “Longju incident”, it was on August 25, 1959, that PLA troops ingressed 12 km into Indian territory and surrounded our Assam Rifles post there, opening unprovoked fire, leading to the death of two personnel. The incident was resolved through diplomatic efforts, the PLA withdrawal being tied to our abandoning our post permanently. Its significance lay in the fact that it was only after this incident that Nehru conceded for the first time in Parliament that the Chinese had not only occupied 37,000 sq km of our territory in the Aksai Chin region but had also built a highway through it connecting Tibet to Xingjian without any substantive action on our part.

Ironically, Modi faces a similar dilemma as was confronted by Nehru after the Longju incident. He was forced to implement an unviable “forward policy” based on the untenable premise that the PLA would not respond. The rest, as we say, is history. Under other circumstances, Modi may have gotten away. Perhaps this time, too, by resorting to obfuscation and doing nothing as he seems to have done in Arunachal Pradesh. Unfortunately, the unprecedented events in the Galwan Valley leave no room for Modi to wiggle out as he attempted to do with his statement following the all-party meet.

He now faces a Hobson’s choice but hopefully, he realises that he has to ace up his sleeve because presently, our Army retains an edge over the PLA given its combat experience, high-altitude warfare skills and the advantages of terrain. In addition, our Air Force, Navy and Special Operations Forces are potent force multipliers that will be game-changers if a conflict becomes inevitable. One hopes that the Prime Minister learns from past events and chooses a course of action that is in the country’s interest and not farcical actions that the political establishment has been indulging in over the years and has got away with till now.

(The writer a military veteran is a consultant with the Observer Research Foundation and a Senior Visiting Fellow with The Peninsula Foundation, Chennai)