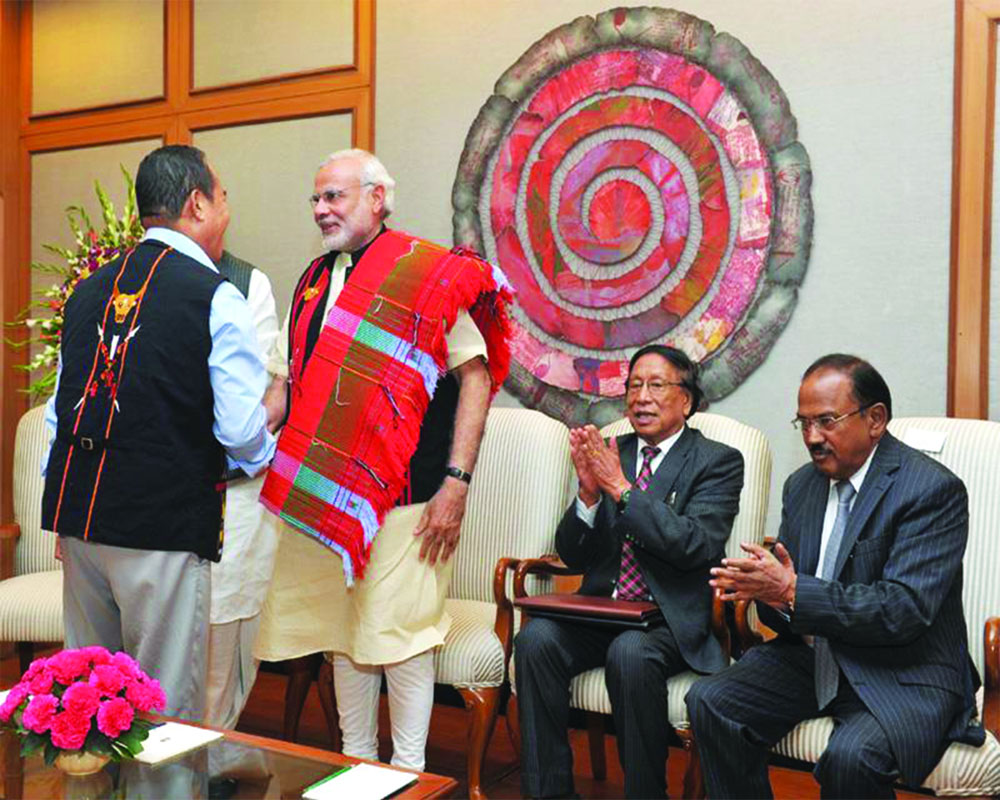 The Naga Army can be suitably integrated with the Naga Regiment of the Army. The challenge is to convince Muivah to accept an entity with sky as the limit for privileges and guarantees

The man in the eye of the storm is Ravindra Narayan Rao Ravi, a police/Intelligence Bureau (IB) officer whose meteoric rise after superannuation to the Deputy National Security Advisor (NSA), then as an interlocutor and Governor of Nagaland, may soon be a legend. While making him the Governor, retaining his interlocutor post became an issue of conflict of interest; his negotiating overreach has unravelled the Nagaland framework accord of August 3, 2015. If anyone had studied his antecedents as a compulsive critic of the Nagas, especially the National Socialist Council of Nagaland (NSCN)-IM, and of previous interlocutors, he should never have been made one but for NSA Ajit Doval’s confidence in a fellow police officer.

On the table were three issues: Naga identity, sovereignty and unique history. Union Home Minister Amit Shah has reassured the Nagas that they will not be equated with Kashmir and that their identity would be protected by Article 371(A) of the Constitution. But lack of trust has crept in. Sovereignty is the core issue of the Naga Framework Agreement (NFA). The unique history of the Nagas was recognised by former Prime Minister Atal Bihari Vajpayee in 2003: “It is true that of all the States in India, Nagaland has a unique history. We are sensitive to this historical fact.” The source of this concept is none other than NSCN-IM supremo, Thuingaleng Muivah, who has been negotiating on a settlement of the Naga issue since 1997; whereas Government interlocutors have had an average life span of five years.

The NFA was signed between Muivah and Ravi with great pomp and promise in the presence of Prime Minister Narendra Modi sporting a Naga Tangkhul (Muivah’s Tangkhul tribe from Manipur) shawl, reaffirming them as the sole representative of the Nagas. The IM faction is the largest rebel group with its own flag and Army, which was the bane of the security forces for decades and came to be known as the mother of all insurgencies in the North-east.

The contents of the NFA are wrapped in mystery and have not even been disclosed to Parliament. To broadbase the agreement in 2017, Ravi roped in the Naga National People’s Group (NNPG), a conglomerate of seven Naga groups, with whom he succeeded to sign a final settlement on the Naga issue on October 31, 2019. If he ever thought that this could pass off as the final settlement of the Naga issue, he was mistaken because the NFA was signed with NSCN-IM and not with NNPG. This became a potential pressure point on the IM. But pressure built up on Ravi when Prime Minister Modi, after reading down Article 370 in Kashmir, sought closure on NFA by October 31. That is when the war of words between Ravi and IM picked up. Both sides began leaking to the media their version of the outcome of the talks. Muivah refused to sign the final agreement, depriving PM Modi of yet another political feather in his cap during the Hornbill Festival, near Kohima, in January.

Ravi blamed Muivah with reneging on a solution to Naga’s unique history within the Indian Constitution. While addressing the Nagaland Assembly in January, Ravi claimed that the Naga issue had been settled (presumably with NNPG), but there was still work to be done, he added.

In an interview to North East Live in February 2019, Muivah said: “Old issues are not resolved — only one government, integration of all Naga contiguous areas (Nagalim), our flag, our Constitution… this is our stated stand.” Ravi retorted: “This was not what was offered.”  With Modi announcing One Nation, One Constitution, One Flag after Jammu & Kashmir’s integration, Muivah’s maximalist demand was unacceptable. The accord had come unstuck. Ravi’s negotiating strategy changed when he combined his office as Governor with that of the interlocutor. According to those who know Ravi and his frustration with IM, he fell back on the traditional concept that the Naga political struggle is a separatist insurgency, overlooking that the unique history of the Nagas is still the predominant feature of the peace process.

His letter to Chief Minister Neiphiu Rio of Nagaland, alluding to the IM as extortionists and thugs and demanding certificates from civil servants that they had no linkages to such groups, incensed the IM. In his Independence Day speech, he was extremely critical of his own State, calling it the worst performing one, making the Nagas very unhappy with his outbursts as a Governor.

Last week, IM was in New Delhi for a round of talks, where it declared that it was being forced to reveal the terms of the NFA, accusing Ravi of deleting a keyword from the original that apparently stated: “sharing the sovereign power and providing for an enduring, inclusive relationship of peaceful co-existence of the two new entities.” They said the word “new” was removed by Ravi. In their interpretation, “new” is politically sensitive as it goes to define the meaning of peaceful co-existence of two new entities (two sovereign powers) and it strongly indicates that the arrangement is outside the purview of the Constitution.

Ravi rejected this interpretation. IM said that Ravi insulted the negotiating team by using unparliamentary language when he said that this can be understood even by a Class VII student that it means acceptance of the Indian Constitution. The IM is very angry that the Governor referred to them in his letter to the Chief Minister as “armed gangs” and misled the Nagaland Assembly about the progress in talks towards a settlement.

The IM has refused to continue dialogue with Ravi with the Government quietly posting a team of IB officials to continue conversations. In the August 17 meeting with these officials, the IM wanted the Government to confirm that the NFA is still alive in its original form and it will be handled by someone other than Ravi who is sensitive to understand what has been achieved in the last 23 years.

A new interlocutor equipped with patience and understanding of conflict resolution and one who has studied other peace processes is needed. Two books are recommended for the next chief negotiator. One, How Enemies Become Friends: The Sources of Stable Peace by Charles A Kupchan and the other, Transformative Scenario Planning: Working Together to Change the Future by Adam Kahane.

Muivah is 86-year-old and would like a settlement of the oldest internal armed conflict in his lifetime, appropriately acknowledging the unique identity and history of the Nagas. The 5,000-strong Naga Army confined at Mount Hebron near Dimapur can be suitably integrated with the Naga Regiment of the Army. The challenge and genius lie in convincing Muivah to accept an entity with sky as the limit for privileges and guarantees.