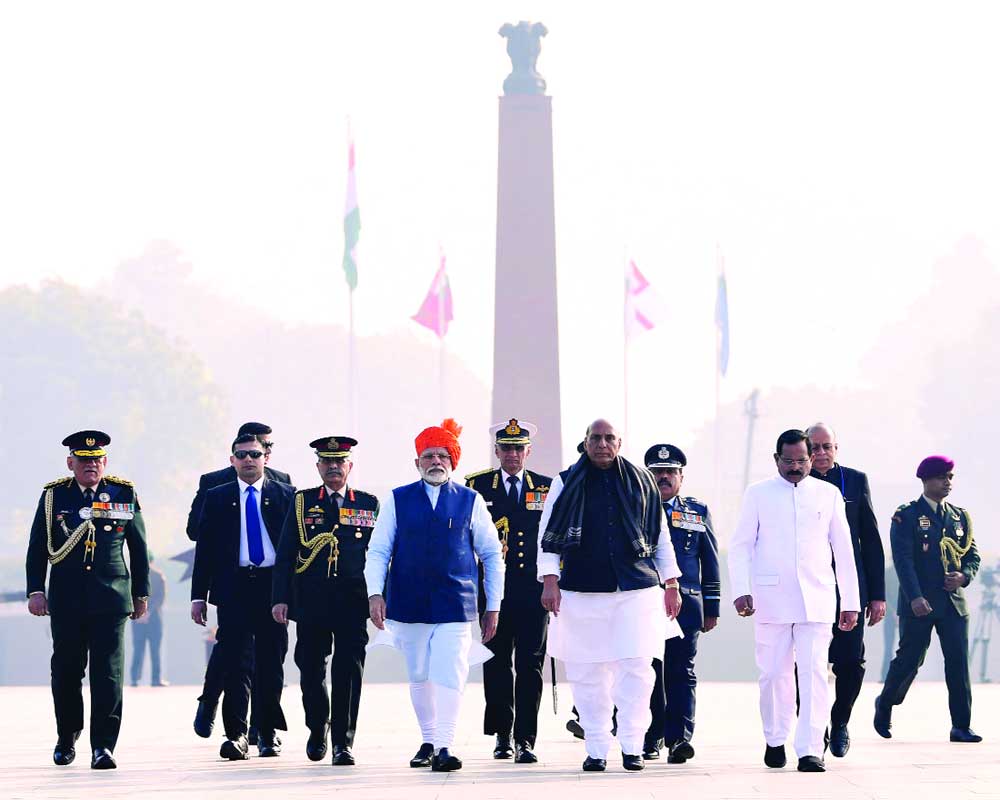 The Modi Government must be complimented for taking hefty decisions on the defence front. Yet, the truth is that its focus has been on symbolism and politicising the military

The format of the Republic Day parade is still evolving in finding the right balance between displaying military prowess, cultural heritage, technological growth and socio-economic developments. When it was first held in 1950 at the National Stadium, it was entirely a military parade, affirming, indeed asserting, civilian political control over the erstwhile colonial armed forces, two of whose service chiefs were still British. The parade was the acme of military traditions, customs and ethos, synthesising the services into an apolitical, professional and secular fighting machine.

Even today, when soldiers get into the battlefield, there is no uniform war cry. In different fighting units, it is as varied as Allah hu Akbar to Jai Mata Di to Aayo Gorkhali. This richness in diversity of military ethos was and is still embodied in the code of conduct contained in the credo set for officers passing out of the Indian Military Academy, which was established in 1932 by Field Marshal Philip Chetwode. It was about dedication to country first, devotion to soldiers under command next and personal safety remaining last, always and every time. This gold standard has been seamlessly blended with the eternal values of the Indian Constitution that are currently under test on account of a variety of national issues. Most of them affect the heart and soul of the military where customs and traditions are sacrosanct.

Seemingly odd customs have a place, too. Like 13 hobnails on the sole of “ammunition boots.” In the photographs that appeared of Captain Tania Shergill leading the all-male Corps of Signals contingent, one can count the number of nails on her boots. These show on dead soldiers in trenches in celebrated World War films like 1917 and Dunkirk. In World War I, India lost 74,000 soldiers but names of just 13,516 of them are etched on the walls of India Gate. Around 80,000 lives were sacrificed in World War II, which have gone completely anonymous. This is a serious omission and needs to be rectified by constructing a monument in the name of the unknown soldier if names of the dead are not traceable.

Prime Minister Narendra Modi was instrumental in hastening the construction of the National War Memorial (NWM) behind India Gate, which bears the names of 25,942 martyrs since independence. Last year, the Army alone suffered 80 fatal casualties in Jammu & Kashmir, the North-east and the United Nations Peacekeeping Operations, according to a Press report released on Army Day, January 15.

Last Sunday’s parade was blessed with good weather and recorded many firsts. Instead of the Amar Jawan Jyoti at India Gate, martyrs — sadly only post-independence ones — were remembered by Prime Minister Modi at the NWM; the new Chief of Defence Staff (CDS), Gen Bipin Rawat, joined the other three service Chiefs and Defence Secretary as official hosts of the parade. The Air Defence Regiment made its marching debut, so did several US hi-tech fixed-wing aircraft and helicopters in the flypast, marking a significant shift from an inventory wholly Soviet/Russian to one significantly diversified.

The indigenous anti-satellite weapon and gravity-defying stunts by women bikers of the Central Reserve Police Force (CRPF) took a bow. Absent perhaps for the first time was a Gorkha-marching contingent though the Kumaon Regiment in Gorkha hats made up for it. But not quite. Altogether, 16 marching contingents and 22 tableaux comprised the parade. The tableau from Jammu & Kashmir was a brazen attempt to portray it as a normal State after the abrogation of Article 370 and its demotion from a full-fledged State to a Union Territory. Both matters are now in the Supreme Court.

As in the past, the climax of the parade was the flypast by the Indian Air Force (IAF). Most aircraft on the ORBAT joined the show, which started with the newly-arrived American CH-47F Chinook heavy-lift helicopter and the AH-64E Apache attack helicopter. These were followed by Made in India Dorniers, C-130J Super Hercules special operations aircraft and the game-changing strategic airlift C-17 Globemaster III. The Russian aircraft in the flypast included Sukhoi 30 MKI, MiG 29 and Mi17 medium-lift helicopters.

Making its debut in the flypast was the indigenously-developed Netra airborne early warning and control system on a Brazilian Embraer aircraft flanked by two Sukhoi MKIs, which should have pleased the chief guest, Brazilian President Jair Bolsonaro. British-made upgraded Jaguars flew in formation as did the MiG 29 fighters. As always,  aerobatics were left to a single Sukhoi 30 MKI, which appeared low and then disappeared into a vertical shoot into cumulo-nimbus, distressing palpitating hearts.

The Republic Day parade did not end with the flypast but as has become the norm, with Prime Minister Modi’s roadshow, walking down the Rajpath, accompanied by six Tata-made Range Rovers and 25 dark-suited security personnel carrying the briefcase with nuclear security codes. Defence Minister Rajnath Singh, anxious to leave, was seen gesticulating towards the Modi cavalcade, virtually enquiring if the marchpast was over.

The Modi Government has delivered on One Rank, One Pension (OROP), accelerated the construction of NWM, conducted surgical ground and airstrikes and appointed a CDS. These are all pretty hefty achievements. Speaking at a media conclave last week, Information and Broadcasting Minister Prakash Javadekar listed the achievements of the Modi Government: Triple talaq, Article 370, Ram mandir, Citizenship Amendment Act (CAA), National Population Register (NPR) and National Register of Citizens (NRC)… The maximum applause he attracted was from his reference to the Balakot airstrikes. Yet, as the fiscal budget for 2020-21 will show on Saturday, the investment made by the Government towards defence modernisation is to borrow a famous phrase by General Zia-ul Haq, “peanuts”, barely sufficient for the payment of carryover liabilities.

The truth is that the focus of the Government is on symbolism and over time, further politicising the military. Like yesterday, even at the annual National Cadet Corps (NCC) parade at Cariappa Parade Ground in New Delhi, Modi made an inappropriate election speech. It was, therefore, heartening to see that the new Army Chief, Gen MM Naravane, while briefing the media before the Army Day, talked of the Constitution and its Preamble, which is being widely read out by the youth across the country in reaction to CAA. The General hinted that the military is not committed to the ideology of any political party in power. But the very next week, during the Army Day parade, unsuspectingly he read out chapter and verse of Government-stated virtues of nullifying Article 370, a matter sub-judice in the Supreme Court.

Later today, you will listen to the solemn hymn and melody, Abide With Me, bringing down the flag at the Beating Retreat ceremony, signalling the end of the annual January series of parades, reflecting pomp, pageantry and pride. Momentarily banished, this immortal piece of music will, after all, be played. People protested against its removal in order to “Indianise” the ceremony because it was a Christian and colonial melody without knowing its relevance to military tradition and customs. More absurd changes were attempted in the past.