New order in the making

New order in the making 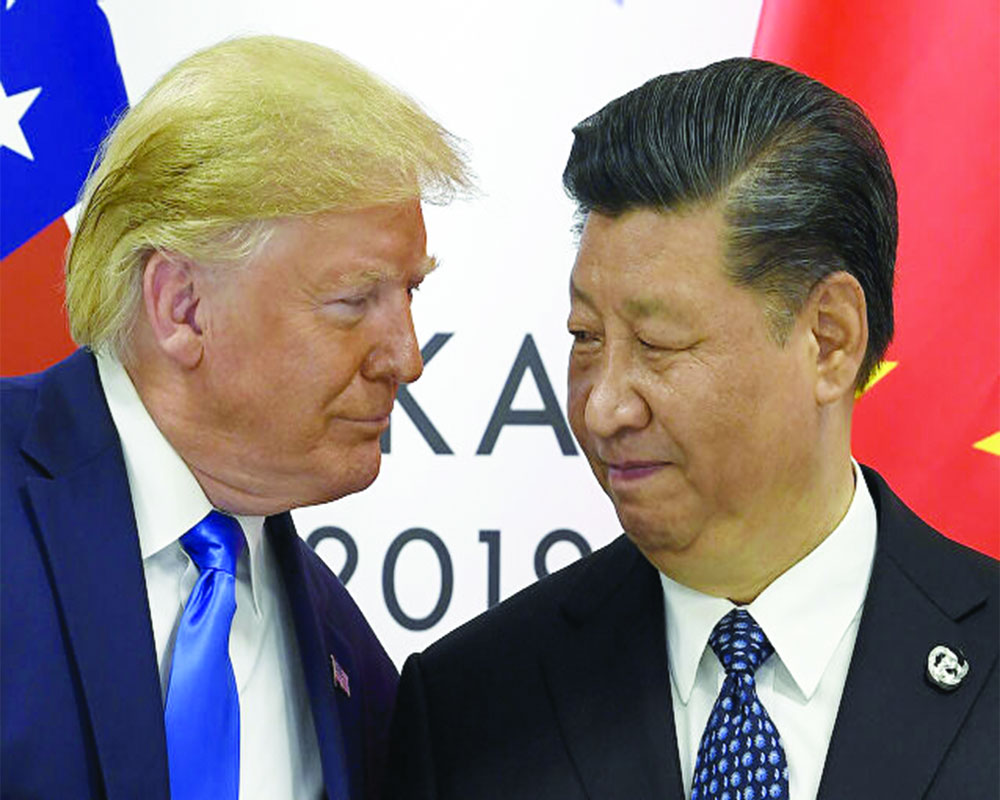 In a post-COVID world, how the US and China respond and engage with each other will not only influence the future of their great power competition but determine the emerging global scenario

The number of COVID-19 positive cases in the US just hit a staggering one million while the number of deaths crossed 56,000. The country has, perhaps, passed its peak, unless there is a second wave, like in the pandemic of the last century. As cases mount, the number of Americans who will succumb to the deadly virus is astonishingly reaching closer to the combined death toll in the Korean and the Vietnam wars.

The world has grown up on the narrative that America cares about the lives of its people — whether in combat or civilians — than most countries. While the validity of this argument can be debated, there is no denying that there’s a sense of pride about the American way of life and the approach of its Government, which drives a superiority ridden revenge in the aftermath of every externally induced attack/setbacks. Not for nothing, the death of four American soldiers in the deserts of Niger and three soldiers in the Manda Bay, Kenya, in 2018 churned a domestic debate about the need for assessment in American troop deployments in Africa and the world over. The humiliation that America suffered in Tehran in the 1979 hostage crisis still fuels its regime, toppling compulsions in Tehran. The severity of the US’ response has also historically depended on the political affiliation of the incumbent President, with the Republicans going for a whole hog response. That America is mired in an election cycle with Joe Biden, the likely Democratic presidential candidate, catching up fast with President Donald Trump’s ratings is sure to shape a response that is intended to reassure the domestic electoral base that the US will avenge the loss of lives. So, how will it respond?

While it is too early to predict the American response in shaping a post-COVID-19 global order, portents of a recalibrated relationship with China are already emerging. Mutual blame-game over the origin of the virus, expulsion of each other’s prominent media organisations and an investigation into the origin of the virus are already being undertaken by the US. While this may not fundamentally transform the broader trends of the Sino-US relationship, historically predictable trends in the latter’s response after national crises and the vectors emerging from the COVID-19 epidemic, along with its toll on American lives, point to substantive overhaul in its policies once it emerges out of the reeling pandemic that has brought the country to a screeching halt.

The 9/11 attacks saw it undertake immediate response in the form of unprecedented tightening of homeland security and global compulsive lobbying for “war on terror,” leading to the invasion of Iraq on the pretext of “weapons of mass destruction.” The impact of these global changes in America’s foreign policy was so intense that they are being experienced even now in varied forms: Tougher airport screening protocols, reduction in the number of visas issued, surveillance and tightening of immigration norms. With the Trump administration reinforcing American foreign policy conservatism, these impacts are being felt even more, especially by the non-citizens in the US than ever before. His announcement of a new visa section norm must be seen in the same light.

The rapidity with which the COVID-19 epidemic is sweeping across cities in the US, having broken the back of one of the most populous and iconic cities,  New York, there cannot be much doubt that Washington is planning an overall recalibration of foreign relations with China. One of it is health infrastructure, perhaps an ongoing analysis to assess intelligence failure apropos COVID-19, improving the use of technologies in predicting and fighting future crises like the current Coronavirus outbreak, enhancing robustness for better defence preparedness and commensurate response to crises like this pandemic.

In the historic $2 trillion stimulus package that has been signed by Trump to bring the American economy back on track, an emergency fund of $8.3 billion has been put forth by the Trump administration for the defence department. Clearly, there is a defence component of the American response to COVID-19 from the Pentagon in waiting. Whether it will be too China-specific or a general uplifting of America’s preparedness remains to be seen.

That the US could not see the virus coming and ravaging American lives on an unprecedented scale has catapulted COVID-19 high on the list of its historical intelligence failure —   perhaps in the same line as Pearl Harbour, the Iranian hostage crisis and the 9/11 attacks. While that is a conventional national security consideration, China has also launched a “propaganda war” through “wolf warrior” diplomacy upon the US and elsewhere by ramping up the narrative that the American military might be to blame for the Coronavirus outbreak in China. As such, what COVID-19 has done is that it has further flared up the already tense and uncertain atmospherics in the US-China relationship, coming close on the heels of an ongoing trade war between the two largest economies of the world.

As the US-led liberal international order is perceived to be under severe strain in the face of an unapologetic claim for a peer-competitor status by China, COVID-19 and the tit-for-tat responses from both sides is bound to turn the US-China strategic rivalry more combustible. In more recent US  military and diplomatic documents, China has begun to occupy a much starker place as a “revisionist power”, a strategic competitor and challenger to the US global primacy “that needs to be countered and contained.”

As China’s increasing economic and security engagements with countries across the globe rattle America’s strategic minds, the US, despite President Trump’s uncertain ways, has been doubling down on its alliances and strategic partners to manage the consequences of China’s rise. America’s approach to China’s ambitious Belt and Road Initiative (BRI) and the latter’s approach to the US Indo-Pacific strategy has brought forth a complex set of perceptions and misperceptions about the global order. The new face of US-China competition and confrontation, seen through the wrangling over 5G technologies, China’s heft with leading US universities and national security concerns, is adding further acrimony amid the COVID-19 saga.

Amid anger and suspicion within the global community regarding China’s response to the virus outbreak, Beijing is increasingly projecting itself as a country that has successfully fought COVID-19 and is ready to help other nations now. To be sure, China’s response amid the ongoing COVID-19 crisis globally has positioned it ahead of America in the “scramble for Europe” 2.0.

On the other hand, the US  occupies the limelight for President Trump’s arguably “incompetent” and “unpopular” leadership and for becoming the ground zero of COVID-19 infections. How the two most powerful militaries and the largest economies in the world respond and engage with each other will not only influence the future of their great power competition but also the multiple platforms of global governance and multilateral agencies, cutting across the political and economic apparatuses that will determine the emerging global order.

Once America emerges out of this pandemic, it is sure to undertake vigorous domestic and foreign policy recalibration. Perhaps, for the first time, the world will see an offensive concoction of America’s health imperatives domestically and its national security objectives abroad. This strategy is likely to pivot itself on three components — emerging technologies (particularly AI), enhanced surveillance and a historically unmatched upping the ante on building new and expansive health infrastructure. Airports globally, particularly in the US, could see the end of any “touch”, even as facial recognition machines will likely replace any physical contact that carries the risk of infection. Facial recognition would in turn mean vast databases of people online. Many of these technologies are already functional at Chinese airports, about which democracies all over the world, led by the US, have depicted discomfort.

For many in the US, as in the world, this would mean a conflicting question of “consent” and a more constricted democratic space. Enhanced State control, surveillance and personal data storage could change the very nature of democracies and for many people a costly bargain. However, given the emerging nature of threats, it appears that most political systems will opt for that bargain, particularly in line with the fact that the fundamental tenets of liberal democracies have historically shared an inversely proportional relationship with national security.

In the case of the US, these changes would mean that the perils of fighting this one-upmanship battle with China could shift the credentials of its political system towards those that it seeks to fight.