Not an ordinary face-off

Not an ordinary face-off 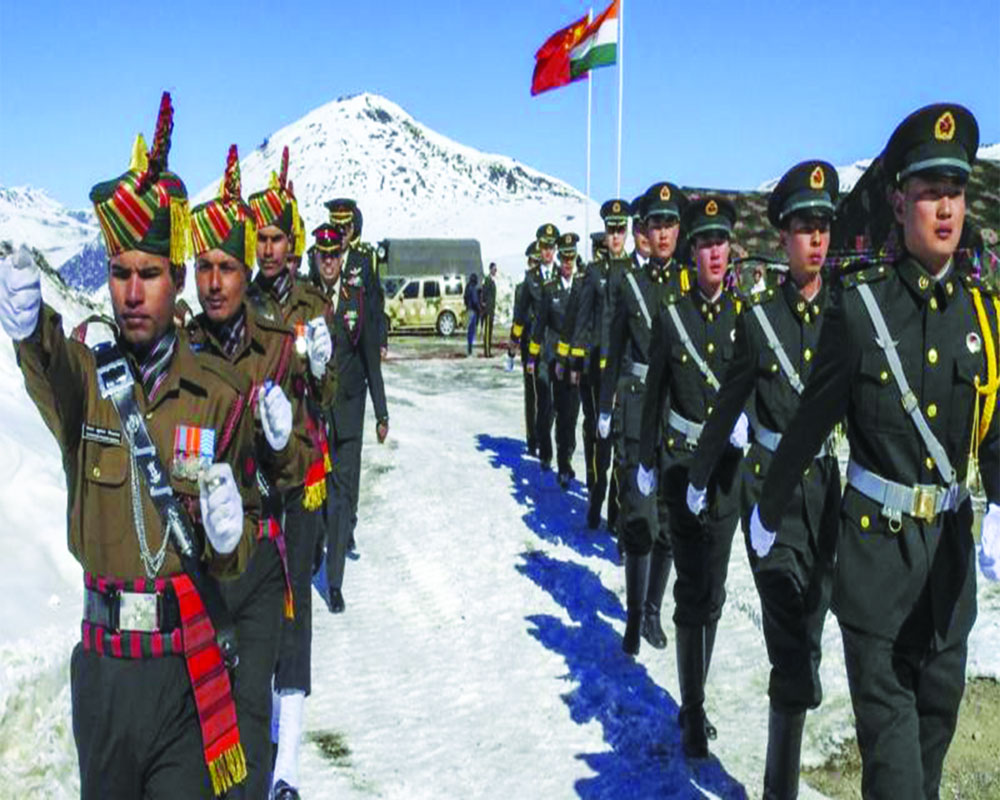 Fatal clashes along the border come at a time when India and China mark 70 years of diplomatic ties. Tension must be defused through politico-diplomatic intervention at the highest level

Prevailing tension in eastern Ladakh during the ongoing disengagement exploded into a fatal clash on Monday night in the Galwan River Valley but without any exchange of fire though casualties on both sides were reported. Expectedly, the Chinese have blamed the Indian soldiers for the incident. The Global Times says China never announces its casualties. This brutal scuffle between the two nations breaks the 45-year-old record of a de facto ceasefire and no casualties. This is akin to the erstwhile Helsinki agreement during the Cold War. The site of the fatal clash indicates the military importance of the Galwan River Valley and the determination of both sides not to yield. Violent scuffles have the potential to escalate into the use of military weapons that will open a second front for India, which we can ill-afford. Military diplomacy has serious limits. Going by the events that have followed, Army Chief Gen MM Naravane’s contention last Saturday that a lot of disengagement has taken place in Galwan does not appear to be an accurate assessment.

Rewind to May 5. Two French words encapsulate the incursions and their changing patterns. Fait accompli: Like the Russian annexation of Crimea, China’s aggression in the South China Sea and its intended but failed territorial assertion in Doklam. And déjà vu: Such incursions have occurred in the past at Depsang Valley  (2013) Chumar (2014) and Sumdorong Chu Valley (1986). But the present month-long multiple intrusions in Galwan, Pangong Tso and Hot Springs area in Ladakh and Nakula in Sikkim are different. They are well-planned, large-scale, violent and sanctioned at the highest political level.

China enjoys distinct superiority in the balance of military power and infrastructure in areas of contestation. These coercive actions target India’s strategic highway, running parallel to the Line of Control (LAC) from Darbuk-Shyokh-Daulat Beg Oldie (DSDBO) near the Karakoram Pass,   which threatens its dominance in Ladakh, especially the disputed Aksai Chin road linking Xinjiang with Tibet. Reasons for change in Beijing’s behaviour? Compensation for China’s reputational loss due to the mishandling the COVID-19 pandemic; to pacify its domestic audience; display its strength as it did during the recently concluded National People’s Congress plenary session; and warning India that it can create pressure points along the border should  it attempt any containment strategy.

China’s strategy of territorial creep has been perfected over the decades on the Tibetan border to enlarge disputed areas, extend claim lines and construct roads and fortifications a la Doklam. The People’s Liberation Army (PLA) is perennially exploring weaknesses along the disputed LAC to block India’s legitimate right of patrolling up to its claim line while permitting the PLA a free run. The increased display of territorial nationalism — not give up an inch of territory — is in sync with Chinese President Xi Jinping’s “China Dream” and  exhortation of the PLA in battle readiness. Overall, it invokes Sun Tzu’s dictum of winning battles without fighting.

There is a larger PLA game plan. Miffed by Union Home Minister Amit Shah’s vow to retake the Aksai Chin in August 2019, following the reading down of Article 370 and making Ladakh a Union Territory, Beijing wants to provide additional depth to the disputed Aksai Chin highway. With short supply lines on the Indian side and improved connectivity in eastern Ladakh, the PLA sees this as a long-term threat. Its contingency plans include pushing Indian defences west of Shyok river and south of Indus river up to its 1960 LAC claim line. It worries that the Indian road to Daulat Beg Oldi near the Karakoram Pass can pose a threat to the Karakoram Highway and the China-Pakistan Economic Corridor (CPEC). On the other hand, if China can isolate the Karakoram Pass, it could gain access to the Siachen glacier and join hands with its iron brother, Pakistan. It is the realisation of this strategic wedge that India must prevent.

Maintaining ambiguity on LAC is China’s masterstroke. India tried unsuccessfully in 2002 to exchange maps depicting each other’s presence and perception of LAC between  the then Foreign Secretary Kanwal Sibal and his counterpart Wang Yi, currently Foreign Minister and Special Representative for border talks. Similarly, the ambitious decision in 2005, to skip LAC clarification and forge a political framework for the resolution of the boundary question, was aborted. In 2014, during Xi’s visit to India, Prime Minister Modi urged that both countries accept a common LAC but Xi ignored the request. The SR dialogue has become about feel good.

India’s strategic culture has cultivated in military psyche a reactive strategy except in the 1971 war. So in Kargil, the  infantry was assaulting uphill, taking avoidable casualties to dislodge Pakistani intrusions and so on. But at Sumdorongchu, though the second mover, India’s build-up was so swift and overwhelming that the PLA recognised the signal of strength. Although restoration of status quo ante took a year, the show of strength facilitated a Chinese invitation to the then Prime Minister Rajiv Gandhi to Beijing, breaking the decade-long political hiatus.

China’s escalation is not only horizontal but also vertical. The PLA has shown it can brazenly intrude at a time and place of its choosing. That, too, without the use of firearms and cause death and injuries. Of the five intrusions, one of the  highest strategic concerns for China is the Galwan valley. In these columns last week, the sterling value of Galwan in the domination of Shyok river and the highway to DBO was explained. Its occupation in 1961 by 4/8 Gorkhas and its loss in 1962 indicate why the PLA covets the strategic enclave and will not vacate it without a significant trade-off.

It may use other tactical intrusions as a bargaining chip for retention of more valued real estate. The absence of India’s will and deterrence is stark. In the mid-1980s, after Sumdorongchu, the Indian Army had prepared contingencies for tit-for-tat operations. Fortunately, the military balance was less adverse then than now. Still, operations to counter the PLA pressure points along LAC are needed. Holes in the numerous border protocols that have encouraged PLA encroachments need plugging. India should offset its continental handicap by exploiting its maritime superiority in the Indian Ocean to buzz Chinese vessels confronting their Malacca dilemma.

Ironically, the fatal clashes are coinciding with the 70th anniversary of India-China relations when both countries are combating a calamitous COVID pandemic. The last fatal incident along the LAC was in 1975 in Arunachal Pradesh when the PLA ambushed an Assam Rifles patrol, killing 11 soldiers. As military diplomacy has exposed its weakness, it is essential that the 45-day standoff is defused through politico-diplomatic intervention at the highest level. New Delhi’s bottom line: Restoration of status quo ante May 5 will be a long and painful process. The centre of gravity is the Galwan River Valley.