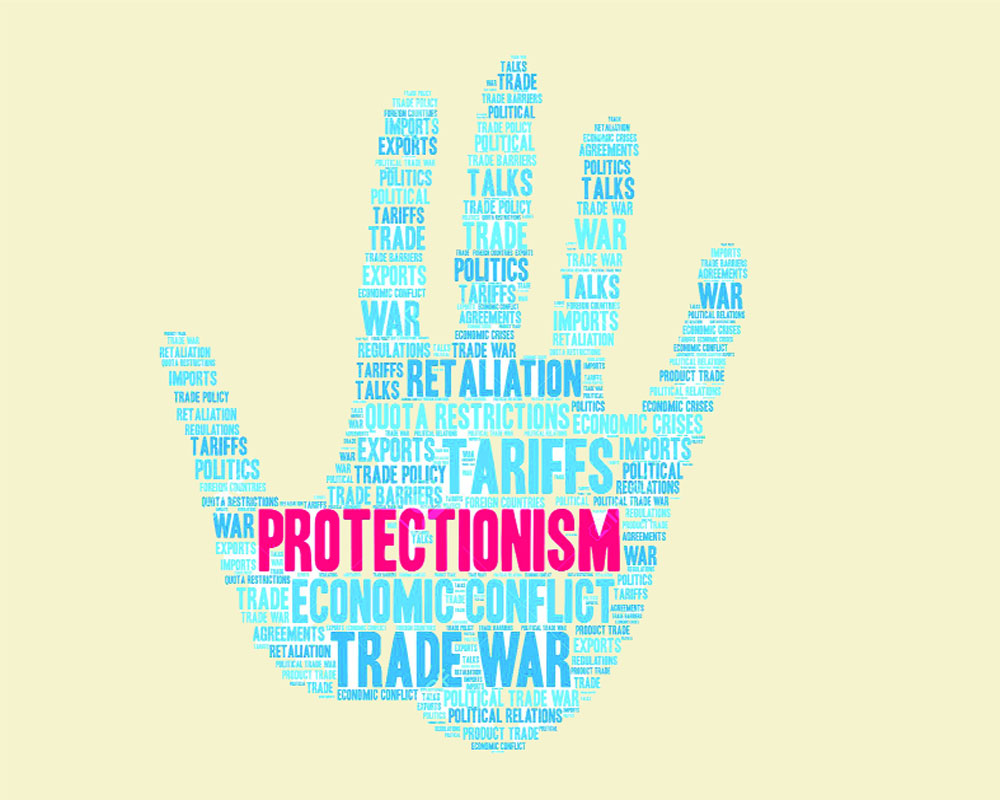 The Govt should shed its current protectionism. Instead, it should go for an open trade policy by slashing import duties and eliminating non-tariff barriers

While presenting the Union Budget for 2020-21, Finance Minister Nirmala Sitharaman had renewed the commitment of the Modi Government to “Make in India.” She saw this as the most crucial component of the strategy to make India a $5 trillion economy by 2024-25. To achieve this, she targetted doubling of exports from the current over $500 billion to $1 trillion (that includes an increase in farm exports from $40 billion to $100 billion). Faced with a whopping contraction in the Gross Domestic Product (GDP) by close to 25 per cent during the first quarter, a continuing slide during the second quarter and projected decline for the whole of the current year by 10 per cent-14.5 per cent, the $5 trillion target may have lost much of its sheen for now. Nonetheless, the Government has other compelling reasons to pursue “Make in India” vigorously. First, the devastating impact of the Corona pandemic on economies worldwide in particular and the steep decline in the economy of China (which accounts for a big chunk of imports by India. For instance, of the technical material that is used for making end-use agrochemical products, 50 per cent comes from China) have led to the disruption of global supply chains. This has created pressure on India to go full blast for increasing its domestic production and achieve self-sufficiency.

Second, the frequent changes in rules by the Chinese Government, specifically targeting the US, Europe and Japan-based multinational companies (MNCs) and China’s deteriorating trade and investment relationship with those countries, have prompted hundreds of MNCs to exit. The Modi Government wants to seize the opportunity, make all-out efforts to lure them here and make India a manufacturing hub. How to make it happen?

A clue is available from this year’s Independence Day address by the Prime Minister, in which Aatmanirbhar Bharat reverberated all through. Modi exhorted “our policies, our processes, our products, everything should be the best.” Put simply, Indian industries should endeavour to manufacture products which can compete in terms of the price as well as quality, both in the domestic and international market. Broadly, two sets of factors are relevant here: (A) Those which are internal to a firm and (B) those which are external.

Factor A includes the ability of the firm to innovate products, which meet diverse demands of consumers in a manner that offers the latter quality, safety and convenience, putting in place manufacturing practices, which deliver best products on all these counts and optimising all factors of production viz. capital, labour, land and technology to ensure that the cost of supply is kept to the bare minimum. All these factors are within the control of the firm.

Factor B includes the availability of raw materials and other inputs at a competitive price, hassle-free logistics and transportation at low cost, availability of funds from credit institutions such as banks at low interest rate and a taxation structure that lowers the incidence of tax on products. Most of these factors are beyond the control of the firm. These depend on the macro-economic environment which, in turn, is influenced largely by Government policies. Look at petrol, diesel and Aviation Turbine Fuel (ATF) whose price impacts the cost of almost every product and service — cutting across all sectors of the economy. De jure, these petroleum products are deregulated. However, since the market for these is dominated by public sector oil companies, there is an upward bias in their prices which gets aggravated due to high taxes. At present, these items are out of GST (Goods and Services Tax) which means they continue to attract central excise duty (CED) and value added tax (VAT) at a high rate. No wonder, the tax component alone is nearly two-third of the retail price.

Power is another major input that impacts production cost. More than 90 per cent of the electricity is supplied by power distribution companies (discoms) at tariffs determined under cost plus mechanism. These rates subsume inflated cost allowed to power generators, pass-through of ever-increasing fuel cost, electricity tax and other levies, cost imposed on the system due to supplies to farmers and poor households at subsidised price (call it cross-subsidy), large-scale theft and so on. All of this result in exorbitant charges from industries.

The businesses also face a high cost of transportation and logistics thanks to high rail freight on movement of goods having to subsidise low fare on passenger traffic, high cost of movement by road due to escalating diesel price and high toll tax charged by concessionaires on highways (courtesy, inflated capital expenses on building roads and high cost of land acquisition). Wherever exports and imports are involved, high port handling charges add to the cost.  Finally, they have to pay high interest rate on both long-term and short-term funds borrowed from banks, non-bank finance companies (NBFCs) and other financial institutions (FIs). Though interest rates are deregulated and the Reserve Bank of India (RBI) also keeps prodding banks/FIs to lower the lending rate (in the last 18 months or so, it has reduced the policy rate i.e. the interest rate it charges on money lent to banks, by 2.5 per cent to help them), borrowers have not got much relief thanks to the high non-performing assets (NPAs) of banks.

Most enterprises are hamstrung by these external factors, which many a time offset the inherent competitive advantage of firms by virtue of being strong on the internal front. Ideally, the Government should focus on removing these external bottlenecks. If the costs of fuel, transport, power, interest rate and so on are brought down from their present high to a reasonable level, this will automatically sharpen the competitive edge of Indian firms and move us closer to the goal of making India a manufacturing hub.

Instead, the Government is moving in a direction that does not augur well for its “Make in India” mission. It is increasing customs duties (during 2014-2019, it raised import duty on 3,500 items; electronic items, especially mobile phones and automobiles attract high levies), raising non-tariff barriers e.g. requiring dairy and poultry products to meet certain specifications, controls on the price of medical equipment viz. stents, knee implants and so on and now even implementing a licence regime for certain imports (import of TV sets).

In certain sectors, such as agrochemical, it is micro-managing things to a point of barring import of certain products for which indigenous facilities exist. Import of fertilisers such as urea is permitted only on residual basis i.e. only to the extent that domestic production fails to meet the demand. Moreover, only agencies authorised by the Centre such as the State Trading Corporation (STC), Minerals and Metals Trading Corporation (MMTC)  can import it. With this overly-protectionist mindset, on November 4, 2019, Modi announced India’s decision not to join the Regional Comprehensive Economic Partnership (RCEP), a conglomeration of 10 members of the Association of South East Asian Nations (ASEAN) viz. Malaysia, Indonesia, Thailand, Vietnam, Singapore, the Philippines, Myanmar, Brunei, Laos and Cambodia plus six others like Australia, New Zealand, Japan, South Korea, China (besides India) covering 50 per cent of the global population and nearly 40 per cent of the world GDP.

From the same prism, it is reviewing existing Free Trade Agreements (FTAs) with ASEAN and its member countries. This approach has stymied chances of India signing a limited deal with the US (this is largely about goods and market access), forget concluding a comprehensive FTA, which also covers intellectual property rights (IPRs), investment and services, issues related to visas and manpower movement. For the same reason, talks for the FTA with European Union (EU) countries are not progressing at the desired pace.

The logic behind the Government’s current policy actions is an underlying belief that our domestic market should be reserved exclusively for “Made in India”  products. Using the same argument, what if other countries also decide to reserve their local market for  indigenously-made products? In that scenario, our exports are bound to take a hit; the goal of doubling Indian exports to $1 trillion will look like daydreaming. India can’t have the cake and eat it too. A scenario in which our products have uninhibited entry into the market of other countries (needed for scaling up exports) even as the products made in those countries face entry barriers on the Indian turf is neither practical nor sustainable. The Government should shed its current protectionist policy stance. Instead, it should go for an open trade policy by slashing import duties and eliminating non-tariff barriers. It should sign FTAs with groups such as RCEP, EU and so on as also with individual countries. As for perceived threats, there is ample scope for improving the competitiveness of India made products by addressing key bottlenecks under the “external factor” category — as brought out above.