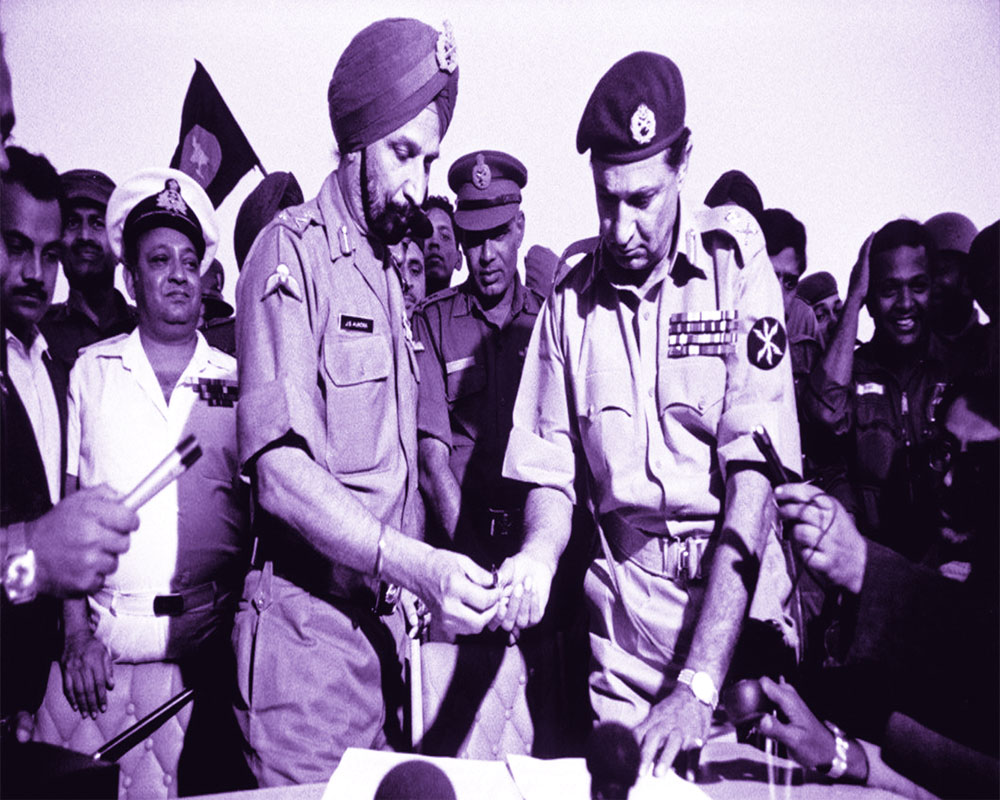 Half a century ago, Pakistan’s darkest day was the surrender of 93,000 Pakistanis in Dhaka on December 16, 1971. Nearly 81,000 prisoners of war (POWs) were from the Pakistani armed forces (with some Bengali soldiers who had chosen to remain with the Pakistan Army) apart from 12,000-odd civilians, including collaborators. And though everyone associates the fall of Dacca (as Dhaka was then known) to then Army chief General Sam (SHFJ) Manekshaw, who had no doubt a larger than life presence in South Block, a closer reading of one of the few accounts of how it all happened — since official records in Calcutta were shredded at Gen Jagjit Singh Aurora’s orders — shows that credit must instead go to (then) Maj Gen JFR Jacob along with Maj Gen Inder Gill, who was then the Director of Military Operations (there was no DGMO then), and Lt Gen Sagat Singh, who was commanding IV Corps in Tezpur. Maj Gen JFR Jacob was the Chief of Staff of India’s Eastern Army Command and was thus involved in planning and meticulous implementation of the operations in East Pakistan, which is detailed in his autobiography, An Odyssey in War and Peace.

Millions of refugees flooded across eastern India in 1971 into the States surrounding East Pakistan (now Bangladesh) after Pakistan’s ruthless military clampdown there, which was ordered by Pakistan’s dictator Yahya Khan following a pent-up demand for their rights after election results gave Bengali leader Sheikh Mujib a clear victory. It led to all their Chief Ministers insisting that India must do something to avert this humanitarian crisis. Indira Gandhi summoned the then Army chief Gen Sam Manekshaw for a meeting with her ‘kitchen Cabinet’. She wanted the General to go to war and liberate enough territory in East Pakistan, so that the refugees could be sent back. However, Gen Manekshaw had apparently cautioned against haste since many factors were involved. They were then into the summer of 1971 and the harvested grain needed to be moved across the country. The trains and road transport could either ferry the grain or the troops to battle. And then monsoons would follow, which could hamper the movement of military units, especially in the riverine terrain of Bangladesh.

Indira, heeding the military’s advice, decided to let the armed forces do what they are best at, to fight a war and win it. Gen Manekshaw apparently promised her that given the time, he could help her “make history and even geography”, as I recall him saying at the first Infantry lecture at Vigyan Bhawan in October 1994.  Even as the armed forces began to prepare for what truly became a historic victory, Indira took up the job of winning the world’s support for India’s humanitarian initiative. By August 1971, New Delhi had signed the Indo-Soviet treaty of Peace, Friendship and Cooperation with Moscow. Not only was it a significant departure from the Nehruvian obsession with non-alignment, it was Russia’s support at the many sessions in the United Nations that stalled resolutions at the initiative of  Washington to help Pakistan when Indian troops rolled down the plains of East Pakistan. But Jacob dismisses this story that Gen Manekshaw had often told — and which I too have heard the late Field Marshal narrate in 1994 — about how he stood up to Indira’s demands to go to war in March 1971. The war officially started on December 3 though military operations along the borders of East Pakistan had started in the last week of November.

Apparently, India — fearing a UN ceasefire — was in a hurry to establish a free Bangladeshi Government in the port towns of Khulna and Chittagong. But as the operations unfolded and gathered momentum, Jacob went ahead with a plan to capture Dacca. This was done by doing what Pakistan’s Generals hadn’t expected India to do. As the Pakistani army had fortified its garrison towns, some fierce battles were fought around them while there was a simultaneous drive to get to Dacca. A simple tactical lesson that is taught to every officer in the Army is never to re-enforce a failure and, therefore, the areas of resistance were bypassed. The Pakistani military dictator, the often drunk General Yahya Khan, was however confident that three factors wouldn’t allow any worthwhile success to the Indian armed forces in East Pakistan. First, his well-armed military machine in West Pakistan would be enough to threaten India’s strategic States of Punjab and J&K. Two, a Chinese military buildup along the Himalayas would tie down enough of the Indian Army. These two factors would be enough to deter India from any serious military adventurism

in East Pakistan. And finally, he was banking on the US to intervene militarily if India’s operations became difficult for Pakistan to contain.

But more forces were needed than Manekshaw was willing to release to implement an effective blitzkrieg towards Dacca. As Gen Manekshaw believed that the Chinese could spoil the party, he refused to release additional troops from the Sino-Indian border until much later. However, as there were no intelligence intercepts to back Manekshaw’s claim, Jacob managed to get troops from the Himalayan formations moved — without Manekshaw’s knowledge — but with help from Maj Gen Gill. Apparently when Manekshaw did learn of this, he gave Gill a dressing down but by then things were moving so fast that the focus shifted to Dacca as the time was limited, with the US pushing the UN for a ceasefire. If that had happened, all the military gains would have been literally back to square one. The Indian Army, ably assisted by the Indian Air Force, raced to Dacca. The IAF literally bombed the daylights out of the Pakistani Air Force. Soon the skies were clear of any Pakistani fighters: They lay wrecked on their airfields. And then a heli-borne operation — the first of its kind since Independence — put troops across the vast Meghna river and many other rivers that had until then given Dacca a natural defence. This was followed by the first ever airborne drop of Indian paratroopers.  By December 15, the Indian troops had surrounded Dacca.

During this lull in the battle, Maj Gen Jacob received a call from Gen Manekshaw, who said: “Jake, go and get a surrender.” He then proceeded to Dacca to meet Lt Gen AAK Niazi, MC, the overall military commander in East Pakistan. Jacob saluted him, and asked him if he was willing to offer an unconditional surrender. A pompous Gen Niazi, enjoying an afternoon of beer and lunch — with all the silver laid out in their officers’ mess — dismissed the proposition with a wave of his hand, saying: “Who said I am surrendering? You have come to discuss only a ceasefire and withdrawal as proposed by me.” He was apparently still hopeful that a ceasefire ordered by the UN could save him and his army a humiliation. But Gen Jacob was adamant and told him that he had 30 minutes and then he’d ask him thrice. If Niazi still didn’t respond, he couldn’t guarantee the safety of Pakistani families (as the Bengali rebels were waiting to lynch them all). Moreover, he’d ask for the resumption of bombings on Dacca. Then Jacob — unarmed and thus a little worried — went for a stroll and to smoke his pipe, giving Niazi time to ponder over the options.

Gen Jacob met Gen Niazi after 30 minutes and asked him thrice if he accepted the surrender document (even though the document’s draft was still unapproved by New Delhi!). But since Niazi refused to respond, Maj Gen Jacob picked up the document and held it up to say: “I take it as accepted.” Tears rolled down Gen Niazi’s cheek and he hung his head in shame. Other Pakistanis glared at him in disbelief. Gen Jacob got up and asked Niazi to move for the surrender, which was done at the Dacca Race Course on a hastily arranged table and two chairs — as the crowds were shouting anti-Pakistan slogans — a tearful Niazi removed his badges of rank and handed his pistol to Gen Aurora before being whisked away by India’s senior officers. He needed to be kept alive to tell the world that he wasn’t mutilated to surrender, but did so — for the world to see — at the Dacca parade ground. This was achieved when there were 26,400 Pakistani soldiers in Dacca and only 3,000 Indian soldiers nearby. Niazi later admitted that Jacob had “blackmailed me into surrendering”.

(The writer is a strategic affairs analyst. The views expressed are personal.)