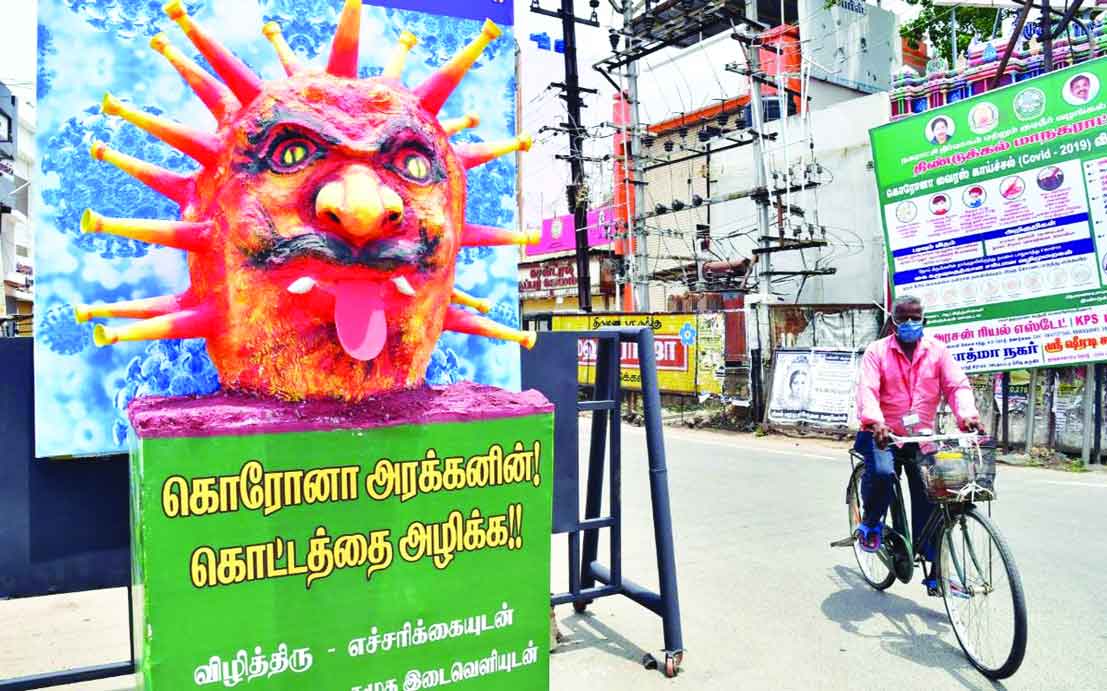 COVID-19 will remain like other viruses but the time has come to march forward. The focus should be on a strategy for lifting the lockdown and on a blueprint for life thereafter

The fear of contracting COVID-19 is understandable. There is as yet no cure, no vaccine. An obsessive fear of getting it, however, will worsen matters. Making the urge to escape the virus’ clutches, the driving concern will conduce to a negative approach, impairing the drawing up of a comprehensive and evolved strategy to cope with the pandemic spreading across India while saving lives, keeping the economy growing and imposing minimum possible hardships on people.

The current strategy considers social distancing to be the most effective way of hobbling the progress of the virus and the lockdown the best way of making social distancing effective. Lauding the lockdown, the fourth stage of which begins on May 18, experts have argued that the number of COVID-19 cases and deaths therefrom would have been much, much higher without it. I will not cross swords with them as I am not an expert in the matter. I can only say that they have gone by model-based projections, which are sometimes right and sometimes wrong.

Besides, there are serious limitations to the extent to which the lockdown can ensure social distancing. Sixty-five million people or 22 per cent of India’s population live in slums where gross over-crowding (often six to 10 people in small rooms), acute poverty and shockingly unhealthy conditions prevail. It is impossible to practise social distancing — to say nothing of working from home — in such places or in highly-overcrowded areas which are not slums. Social distancing is only possible among inhabitants of colonies of at least the comparatively privileged and between dwellers of the latter on the one hand and those living in slums and highly overcrowded areas on the other. Those living in the latter are not only more vulnerable to the infection of COVID-19 but to the adverse economic impact of the lockdown.

The majority of the families living in slums and highly overcrowded areas are of migrant workers who are not highly-skilled and are employed on low daily wages. Many of them did not find work everyday even before the lockdown came into force. The halting of economic activity following the lockdown has left them without work and income. Hence the tragedy of long homeward marches by thousands of families, with women often carrying children in their arms.

Against these projections, the harsh fact is that the lockdown has hobbled the economy and imposed untold hardship on sections that are the least able to bear it. The victims are not only the urban poor, including migrant workers, but rural poor who provide urban areas with supplies and/or depend on money sent by their kin working as migrant labourers in cities. Prime Minister Narendra Modi has doubtless announced a Rs 20 lakh crore package to kickstart the economy and Finance Minister Nirmala Sitharaman has filled in with some details, whose main effect will be enhancing cash-flow in the short run.

Much of how things pan out on the ground will depend on the delivery systems comprising Central and State bureaucracies. Neither of the two is celebrated for its efficiency. A great deal will also depend on the manner in which the lockdown is lifted. Of critical importance in this context will be the relaxations permitted during its fourth phase and their implementation. These should be preparatory to a resumption of economic and social life at the pre-lockdown level except in regions and spheres of activity where restrictions are absolutely essential.

There will be pressures to the contrary both from States and sections of the public fed on a diet of apocalyptic predictions about what will follow and the air may well be rent by warnings of a quantum jump in the number COVID-19 cases and deaths therefrom. India, and, for that matter, the world, has never lacked in doomsayers. The country must ignore them and march on while taking every possible step to halt the disease’s spread and minimise the number of deaths.

It is imperative to adopt a historical perspective. The world has survived pandemics. A massive outbreak of bubonic plague devastated Europe and parts of Asia and North Africa during the 14th century. Perhaps the worst phase was between 1347 and 1351 when, according to varying estimates, it killed one-third to as much as 50 to 60 per cent of Europe’s population. The numbers cited range from 50 million to 200 million deaths. The same disease claimed an estimated 100,000 lives in London, a quarter of the city’s population, during 1665-66. Earlier, the Plague of Justinian (named after an emperor of Byzantium or Eastern Roman Empire) that afflicted his domain in 541-542, killed an estimated 10,000 people a day in its capital, Constantinople (now Istanbul).

In fact, it is plague that led to the institution of quarantine, which began in 1377 when the Rector of the seaport of Ragusa, which then belonged to the Venetian Republic, prescribed a 30-day, later extended to 40 days, isolation for arriving ships. Anyway, plague provides just one example. Small pox, which has haunted the world for 12,000 years, caused 300 million deaths in the 20th century, In India, it killed 15,000 people, mainly in Bihar, Odisha and West Bengal. And this despite the availability of preventive vaccination and treatment with anti-biotics. Despite the availability of both, 838,315 cases of cholera were notified to the World Health Organisation (WHO) during the period between 2004 and 2008. The estimated actual burden of cholera is much higher and in the vicinity of three to five million cases and 100,000 to 130,000 deaths per year.

The world has survived the pandemics mentioned above and other instances of mass deaths caused by diseases. It will survive COVID-19 but may have to live with it even after a vaccine and curative medicine are available. Preventive vaccination and effective treatment have not eradicated plague. From 1985 to 2003, 25 countries reported over 43,000 cases to the WHO. The disease continues to occur.

The focus should be on a strategy for the lifting of the lockdown as early as possible and on a blueprint for life thereafter. It will not be an easy job because it will require action at three levels — international (relations with other countries), national and local. Pressure, born of obsessive fear of the disease, has to be resisted. Simultaneously, the efforts afoot in India to find a vaccine and a cure must continue. Here one must not only look at allopathic but homeopathic, ayurvedic and Unani cures as well. The case of Ozone therapy, which is also said to have shown promising indications, needs to be explored, too.