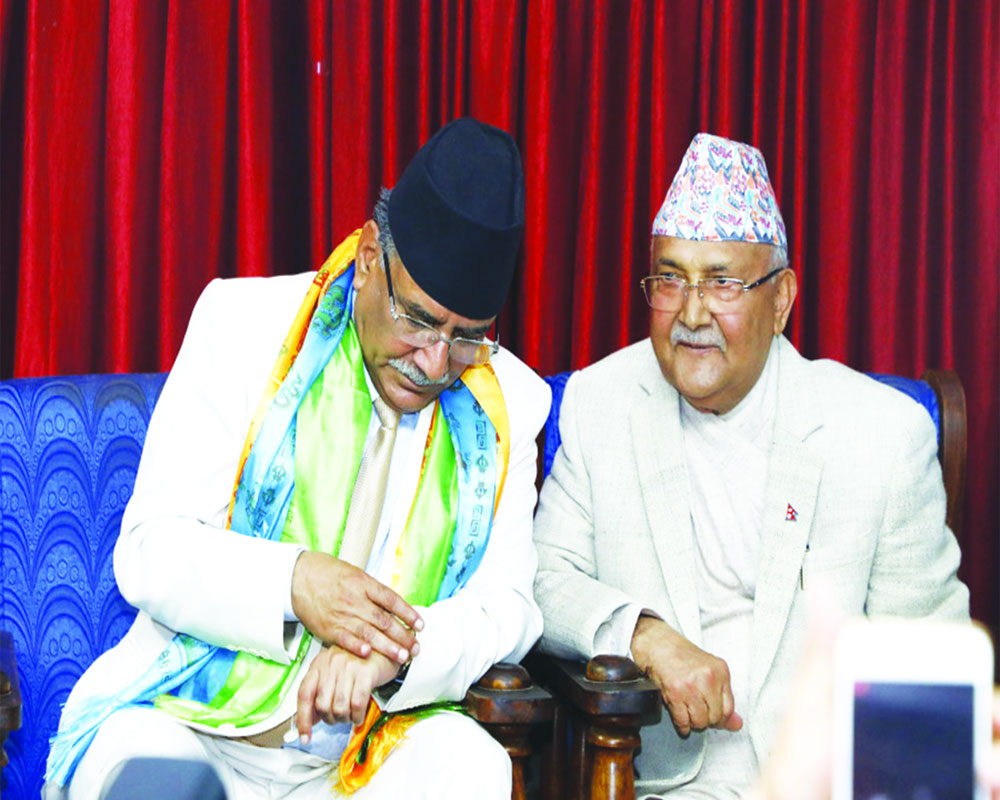 The new political map and a road to Lipulekh have sown fresh seeds of discord whose principal beneficiary is Beijing. Nimbleness was needed from New Delhi in defusing the crisis

Already riding high, China has used the Corona pandemic to extend its political influence in Nepal. Chinese President Xi Jinping spoke to Nepalese President Bidhya Devi Bhandari and inquired about the COVID-19 situation, despatched flight loads of succour and staved off the collapse of the Government over there. Then on May 9, Union Defence Minister Rajnath Singh inaugurated a new Indian road to the disputed Lipulekh, triggering off a political storm in Nepal. This was accompanied by protests and the customary exchange of diplomatic notes. Indian Army Chief Gen MM Naravane, who is the honorary General of Nepal Army, in response to a question on the protests said, “Nepal’s protest over India’s road in Lipulekh might be at the behest of someone else”, alluding to China, though it could also have been Pakistan. Last year in November, there was a tsunami of protests when India reproduced a map depicting new political boundaries in Jammu & Kashmir, including Kalapani, an area claimed by Nepal in its territory.

In the lull before a second spike in the territorial issue, a week-long political charade around May Day, to dethrone Nepalese Prime Minister KP Oli, fizzled out as his bete noire, the Nepal Communist Party (NCP) executive chairman, Pushpa Kamal Dahal ‘Prachanda,’ switched sides and let Oli claim victory. In turn, Oli promised to make his political foe and party vice-chairman Bam Dev Gautam a lawmaker.

It was China and not the traditional player in Nepal, India, which came to the rescue of an embattled Oli. Sensing internal crisis within the ruling NCP and the Oli Government, Beijing’s popular envoy in Kathmandu, Hou Yanqi, followed upon Xi’s 45-minute-long conversation on April 27 with his Nepalese counterpart Bhandari. What followed next were mediations for the next two days, meeting with Bhandari, Oli, Dahal, former Prime Minister Madhav Kumar Nepal and according to one report, even with Sher Bahadur Deuba, the leader of the Nepali Congress Opposition party. By May 2 evening, at the fateful Central secretariat meeting of the NCP where Dahal has a majority, surprisingly, he declared a truce. He called for party unity when it was he who had asked Oli to step down naming Madhav Nepal as his replacement three days earlier at the same forum. Friends of India saw the rescinding of Madhav Nepal’s (sometimes jokingly called Madhav India) name as the Prime Minister as a defeat for us.

Kathmandu fears China’s new political mantra of compliance, which was recently demonstrated in the admonition of the editor of the Kathmandu Post by the Chinese Embassy. This was not so in mid-2016 when China valiantly tried to prevent Dahal from breaking away from the Oli-led coalition Government but very briefly months later, India succeeded in orchestrating his exit with the lure of premiership in a Deuba-Dahal Government. It is another matter that even as  part of this Government, Dahal surreptitiously entered the Beijing-inspired Left alliance, which was expected to sweep the federal, provincial and local polls that followed. In this new “Great Game” in Nepal between India and China, Beijing demonstrably has an upper hand.

It is worth recalling that during the pre-2006 people’s revolution and civil war periods, Chinese diplomats in Kathmandu, while alluding to New Delhi, would claim that Beijing does not interfere in any country’s internal affairs. They would describe Dahal-Maoists as “anti-state rebels”, “miscreants” and “hijackers” of Mao’s fair name. After the Maoists came to power in 2008, Beijing conveniently discovered ideological identity and congruity with them, saying all was fair in love and war.

In contrast, India has had a monopoly in making and unseating Prime Ministers as well as preventing their appointments. Like in 2009, after Prime Minister Dahal was removed from office, he was never allowed to become the premier again till 2016, when he was thought to have been tamed. During the decade of Constitution-writing, Madhav Nepal and Baburam Bhattarai, both considered to be friends of India, became the Prime Minister and so did Jhala Nath Khanal. But Khanal, who’s never passionate about India, was not invited to New Delhi on a State visit.

Oli, once an Indian blue-eyed boy, has risen to become the most powerful Prime Minister and party chairman of Nepal on a wicket of nationalism and anti-India sentiment following the economic blockade of 2015. China’s help in forging first the Left alliance and then the merger of the two Left parties ensured Oli’s sputnik rise. Lord John Dalberg-Acton’s dictum that power tends to corrupt and absolute power corrupts absolutely fits the Oli story well as he sits in Baluwatar (the Prime Minister’s red-stone residence) on a gilded chair under his own towering portrait at the back. In designer clothes, he appears to be in the pink of health even after a second kidney transplant.

Dahal and Oli joined the battle early following a gentleman’s power-sharing agreement, whose existence Oli denied. Mutual sniping was halted when Bhandari brokered an agreement last year, which nominally elevated Dahal as the executive chairman of the NCP even as Oli became its co-chairman but remained a spoke in Dahal’s wheel. What followed next were widespread reports of disillusionment and frustration with Oli’s autocratic style and shenanigans capped with misgovernance and corruption. This, even during the purchase of medical equipment in the midst of the pandemic, passage of two controversial political ordinances, which he withdrew and in transacting due to which Bhandari became complicit. Through such high-handedness, Oli sought to garner more power: Secure two-thirds majority in Parliament and make Constitutional appointments with simple majority.

That is when on April 24, the proverbial straw broke the camel’s back and Dahal triggered off plan Alpha — leadership change — which has been in the works for some time now. It envisages replacing Oli with Madhav Nepal as the Prime Minister, appointing Dahal as the undisputed party executive chairman and Khanal in time as the President of Nepal. While Oli kept clutching at the straws at the party central secretariat meetings and divulged his own leadership reshuffle plan, he sent a May Day call to Yanqi. During the crucial secretariat meeting on May 2, Dahal did a somersault, declaring the importance of party unity and letting Oli stay as the Prime Minister as the latter promised to make Gautam a law-maker soon. That was a demotion for Gautam as earlier, Oli had offered him premiership to wriggle out of the crisis.

Dahal has pressed the pause button on plan Alpha, surprising its key players. Undoubtedly, there will be rewards for Dahal from Oli and Beijing. The ruling political class has shadowboxed what Nepalese are calling a political Corona instead of seriously combating the COVID-19 pandemic, thus proving that power is the ultimate aphrodisiac.

Kalapani and Lipulekh are part of a disputed package revived in 2015 after a trade agreement was signed between China and India. The new political map and a road to Lipulekh have sown fresh seeds of discord, whose principal beneficiary is Beijing. Nimbleness was needed from New Delhi in defusing the crisis.