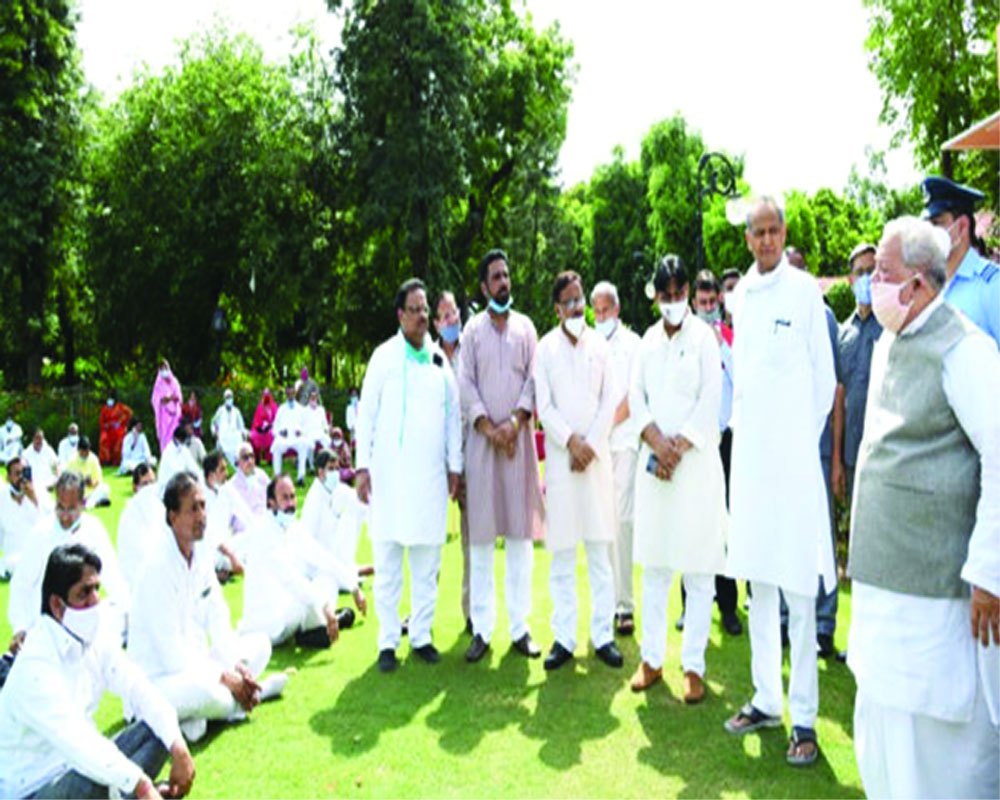 As Gehlot herds MLAs at Jaisalmer and the BJP plays behind the scene, topple games dilute the people’s mandate

The Ashok Gehlot-Sachin Pilot standoff in Rajasthan shows no signs of abating with a new point of friction emerging as soon as an existing issue gets sorted. And it seems that the inter-generational war in the Congress is all set to worsen even if Gehlot aces the numbers game for now. It is not a matter of saving the Government but scoring points in an ego war that will ultimately not help the party. For even if Gehlot sails through, there will be no end to the discontent of the younger breed led by Pilot, who had staked their efforts to craft the party’s return and relevance in the State as elders had failed, but were denied their right to rewards. If Pilot, no doubt a prize potential for the BJP, which makes no bones about a Congress-free heartland, does manage to get more MLAs to his side, he will still be a deliverer of power but not the Chief Minister. He will be just a pawn and not the embodiment of the cause he represents. No matter how flexible it becomes, the BJP can at best still keep him as a deputy that he was. In the end, the Congress would be the loser as it would be seen as dishonouring the people’s verdict with its personality clashes instead of consolidating governance and insuring its house. So now that Governor Kalraj Mishra has agreed to call a House session on August 14, expecting the Chief Minister to seek the trust vote, which the rebels led by his ex-deputy Chief Minister will attend, Gehlot is again upping the perception game with a measure of bluster. Having cornered Pilot with sedition charges, saying he was colluding with the BJP to topple his Government, and sacking him, he was hoping the rebels led by his younger adversary would be disqualified for anti-party activities. The courts didn’t allow it, so Gehlot decided to withdraw the legal case and mount a political campaign, claiming that the BJP had bought over Pilot. While he has been screaming “horse trading” since the Rajya Sabha polls, which incidentally the Congress won, he’s now claiming that the Governor’s 21-day window before the Assembly session will “increase horse-trading” and that the rates had been upped for crossing over. He has even accused Bahujan Samaj Party (BSP) chief Mayawati of siding with the BJP and questioning last year’s merger of the six BSP MLAs into the Congress while overlooking the BJP’s absorption of four TDP MPs (in Rajya Sabha) into it overnight. He has launched a direct missile against the Modi-Shah duo by calling out the Government for “misusing” the Income Tax Department, ED, CBI to “scare and threaten everyone.” Will this pay off?

There’s no doubt that the BJP, in no small part aided by its central leadership, is trying all methods, from inducement to intimidation, to wrest Rajasthan. Or that Gehlot is equally masterful, herding his MLAs with resort quarantine, and now taking them to Jaisalmer. But the political discourse is getting murkier with a return of money bags and power-broking, making a mockery of the mandate and diluting focus besides diverting limited resources in pandemic times. Gehlot’s desperation stems from the fact that he has a narrow lead, one over the majority mark of 101 in the 200-member Assembly. Officially, the Pilot camp has 19 MLAs and now that they can vote, could destabilise Gehlot. And if the court case against the six BSP MLAs, who merged into the Congress, is pursued, then things could get uncomfortable. His desperation is symptomatic of the larger churning in the Congress, which was evident at a virtual meeting of the party presided over by Sonia Gandhi and Manmohan Singh. Rahul Gandhi loyalist Rajiv Satav openly blamed UPA-II as the reason for the party’s erosion in public life, claiming that “the stint of that Government ruined the Congress and so the accountability for the party’s crisis must be fixed from that time.” Yet the elders persisted with their line that “lightweight, inexperienced youngsters” were trying to “undeservingly thrive” by creating a generational divide. The old guards forget that some of them were given prime responsibility in their younger years, upsetting many seniors of their time. And in their advanced years, they have settled into inertia, continuing with what they have built for themselves rather than rebuilding the party. Yet there are younger leaders, who are driven by the desire to leave their mark and are ready to even work at the grassroots as Pilot has shown. For all its talk of devolution of power, the older lot in the Congress still relies on centralised thinking rather than empowering the grassroots functionaries or at least giving them a listen. Pilot had not been so persistent about the top post initially but wanted his stake in governance. Yet he was left out of every decision-making process. Gehlot allowed that rift to widen instead of closing it and strategically keeping him busy. He is a mature politician enough to be told what was needed to be done. But he let his ego and a chieftain’s territoriality come in the way, one that has cost the Congress its Governments in Goa, Manipur, Uttarakhand, Arunachal, Madhya Pradesh and Karnataka.