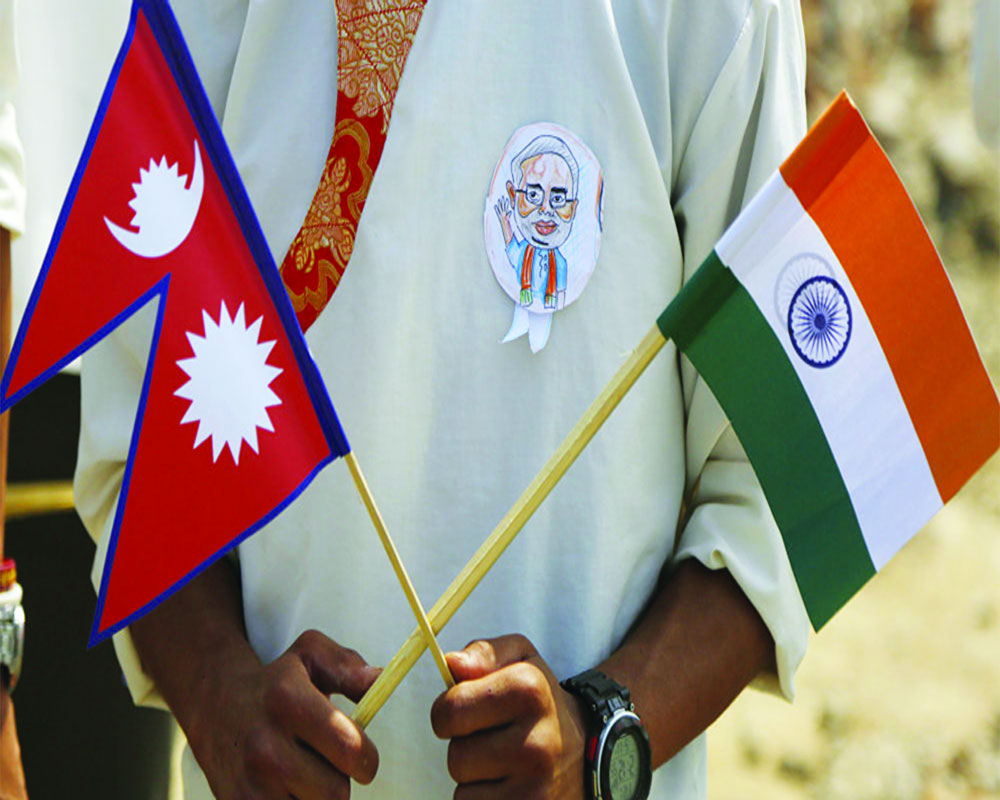 India-Nepal relations are too precious to be damaged by territorial nationalism. It’s time for New Delhi to break the ice

Some back-channeling and rethinking between Nepal’s ruling party and the Opposition, despite the Nepali Congress conditionally agreeing to support the Constitutional Amendment Bill and it's being tabled in Parliament to sanctify Nepal’s new map has created a last chance for diplomacy. Further, the desired unanimity in Parliament may not be obtained due to reservations by Madhesi parties. It’s for the first time that Nepal has altered the geography of its map. Nepalese Foreign Minister “summoned” the Indian Ambassador and its Prime Minister even used unkind words for us. New Delhi, too, was high-handed: It dragged its feet in giving a date for talks, avoidably announced a tarmac road to Lipulekh Pass while the Army Chief, who is the honorary General of the Nepal Army, made unwarranted comments on Nepal’s internal affairs, too. This certainly is not the civilisational bonding that defined relations between India and Nepal. The Kalapani dispute has to be settled politically. Any further delay will only widen the trust deficit.

In my 60th and counting treks from Mahakali to Mechi since 1959, I have come across scintillating names of villages and places: Chisopani, Tatopani, Ratopani, Jumlepani, Pokhripani and also the contested Kalapani, not Kalopani. In India, Kalapani is a curse and is associated with banishment, jail or exile. Still, it has been the bone of contention between India and Nepal for many years and for Kathmandu, it denotes an area of 335 sq km, encompassing Limpiyadhura, Lipulekh Pass and Kalapani. For it, the source of the Mahakali river, which delineates its western boundary, is Limpiyadhura.

For India, Kalapani is the origin of the river near where military posts have existed since the mid-1960s and from where the Indo-Tibetan Border Police (ITBP) patrols regularly up to the Lipulekh Pass. When King Tribhuvan invited the Indian Military Mission in 1952 to Nepal, besides training the Royal Nepal Army (RNA), it had established, according to border expert on Nepal, BN Shreshta, 18 border check-posts on the Tibet border starting from Tinker Pass in the west to Chhayangthap in the east. These posts were vacated in 1969 under pressure from the communist lobby in the palace. Conspicuously, Kalapani and Lipulekh Pass were not part of the border surveillance scheme and, therefore, there was no question of India vacating them. Trade between India and China across Lipulekh Pass started in 1954 and an agreement in 2015 ratified the border trade.

Kalapani has a spiritual and strategic value since it is the gateway to Kailash Mansarovar, dominates Lipulekh Pass and can monitor the People’s Liberation Army (PLA) camp at Taklakot. It appears in Nepal’s official and tourist maps and its adverse military possession is a highly emotive issue. Twenty-six years of field reconnaissance by a joint technical boundary committee and negotiations since 1997 have failed to find a mutually-acceptable solution. Protests in Nepal over Kalapani started in the mid-1990s when a communist Government was in power. It has since become a political football.

India’s new map in November last year, after the nullification of Article 370 in Jammu & Kashmir, showed Kalapani in Uttarakhand without any change in the boundary with Nepal. It was very much similar to the old map. But this triggered countrywide protests and exchange of diplomatic notes. India announcing the black-topping of the road to Lipulekh Pass in May reignited protests at a time when the power struggle in the ruling Nepal Communist Party (NCP) peaked.

It was only with Chinese intervention that Prime Minister KP Oli was able to retain his seat. Adept at using ultra-nationalism for India-bashing and reviving his political stock, Oli published a new map of Nepal, incorporating claimed areas. He wants a national consensus on the legitimacy of the new map through a Constitutional amendment. The Bill should pass muster as the Government needs just nine lawmakers to secure a two-third majority but that will damage irreparably India-Nepal relations, which have been on the mend since 2015 following the economic blockade.

Nepal has deployed its armed police force on the western border near Kalapani with the Nepal Army building a new road to Tinker Pass. These developments, coupled with a parliamentary resolution to reclaim all land and the Constitutional Amendment Bill are likely to escalate tension. The beneficiary from this diplomatic stand-off will only be a third country with whom troubles along the India along the Line of Actual Control (LAC) are mounting. Nepal’s political class must realise that the move to unilaterally alter, validate and internationalise the new map, especially at the height of a pandemic, is unwise. Both sides need to cool off.

Any adverse and escalatory steps will also undermine the long-standing and embedded Army-to-Army relations, which were initiated by King Tribhuvan and his son, King Mahendra, for modernising the RNA. The Chiefs of the two Armies are honorary Generals in each other’s armies, an unprecedented exchange of military honour started by the legendary Field Marshal Sam Manekshaw in 1969. Gorkha soldiers from Nepal have served the Indian Army with valour during all the wars post-independence, winning high gallantry awards. More than 40,000 Gorkha soldiers serve the Indian Army and another 1,50,000 ex-servicemen are privileged by unique welfare services in Nepal that are not available to other soldiers in India. These are 22 district soldier boards, two pension paying offices along with the Ex-servicemen Contributory Health Scheme (ECHS), Kendriya Vidyalayas and numerous other assistance and grants projects. Gorkha remittances are upwards of Rs 15,000 crore (NC), almost one-third of Nepal’s total remittances of $8 billion.

India-Nepal relations are at a tipping point due to map-making and the political row it has generated is at the height of a pandemic. Nepal’s new map has broken the agreement between the two countries to maintain status quo till negotiations help resolve the border dispute. India had initially said it would resume Foreign Secretary-level dialogue mechanism after the COVID-19 emergency. After Nepal issued its new map and Oli’s intemperate reference to India in Parliament, New Delhi has urged Kathmandu to create a positive atmosphere for dialogue. After deferment of the Bill, New Delhi says it is open to engaging to solve border row.

The media on both sides should call a truce. On Wednesday afternoon, Nepali TV channels were playing patriotic music centred on Kalapani and showing clips of its legendary military prowess that extended the Himalayan Kingdom from the rivers Chenab to Teesta, inducing fears of “Greater Nepal.” Nepal’s ruling class should consider shelving the second Constitutional Amendment Bill to avert a showdown. Already, strained India-Nepal relations are too precious to be damaged by territorial nationalism. Foreign Secretary Harsh Vardhan Shringla must call up his counterpart Shankar Das Bairagi immediately and break the ice. Further, the Prime Ministers of both countries must follow up with Modi taking the lead.