Rise of the new plebs

Rise of the new plebs 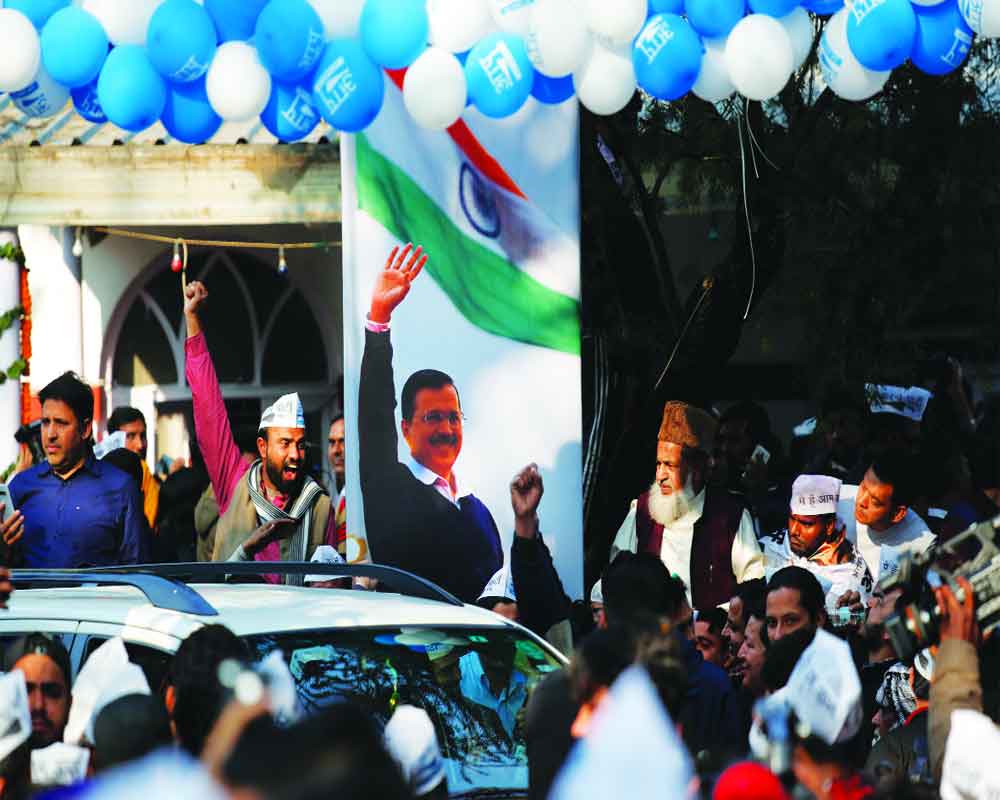 Literally, the word “pleb” means an ordinary person, a commoner or someone from the lower rung of society. The word has often been widely used to indicate just that whenever there has been any sort of a mass upheaval. The thumping and resounding victory of the Aam Aadmi Party (AAP) in the just-concluded elections in Delhi echoes this word, though with a correction. Here, the term “pleb” has come to reflect new politics, raising reassurances as well as concerns. AAP’s victory brings forth a combination of “caste” and “class” elements, a mix of governance and belongingness that prevents its categorisation simply as another form of middle class politics, an urbane political phenomenon.

There were two theories around which the electoral narrative in Delhi was constructed. First was the question of governance and second of identity. Both were invoked variedly and were widely discussed by opposite sides. The first narrative was debated the most. It related to the model of governance around which  AAP mobilised the voter’s sentiment. It sought to attract the attention of the voters by focussing on various popular welfare schemes such as mohalla clinics, clean water, free bus rides, safety of women and legalising colonies among other issues. Rather than engaging in an exclusively bi-partisan hate exchange, it concentrated and crafted a campaign that was aimed at projecting its governance model. In the course of such a campaign, AAP succeeded in dismissing predictions made by various political pundits.

Commentators argued that the electoral promises made by the AAP were utopian in nature. To cite an example, sociologist Anand Kumar (2013) pointed out that regional parties had predicted that AAP would have no electoral future as it was ignorant about the complexities of Indian society and politics. Other observers called AAP leaders a bunch of inexperienced power-hungry people, who gave up the Jan Lokpal movement to gain power. However, Delhi Chief Minister Arvind Kejriwal effectively responded to them by saying, “Our politics is not for power, we want power to change the politics.” Thus, the State was seen as an instrument to effect qualitative changes to ensure safety for the weaker sections, access to necessary services, particularly health and education. Successive election results have cemented these claims.

However, the success of the AAP and the failure of the Bharatiya Janata Party (BJP) provide a cue to the second narrative that has been more subtle than the loud narrative of governance.

Beneath the visible electoral stunt between the AAP and the BJP and the decimation of the Congress as a non-player, the elections were also about a competition between governance and identity, the latter being vigorously articulated as a ferment of nationalism. For the BJP, it was a prestigious election as it believed it could dismantle the AAP and repeat the Modi wave. By trooping in Prime Minister Narendra Modi, Union Home Minister Amit Shah, party president JP Nadda, Union Ministers Rajnath Singh, Nitin Gadkari, Prakash Javadekar and Chief Ministers Yogi Adityanath and Nitish Kumar as the election campaigners for the 2020 Delhi Assembly election, it believed that it could split the AAP’s vote bank.

BJP’s Delhi MP Parvesh Verma even called Chief Minister Kejriwal a “terrorist.” Shah branded him a liar and alleged that the Kejriwal Government in Delhi failed to fulfil the promises of installing 15 lakh CCTV cameras, procuring 5,000 DTC buses, opening 1,000 schools, regularising temporary workers and providing free wi-fi. He went to the extent of comparing him with Adolf Hitler. Despite the high decibel campaign, the BJP neither had a manifesto nor could it succeed in projecting a dominant face against Kejriwal. This was something that it attempted at during the national elections by making Prime Minister Modi its prime ministerial candidate and turning the elections into more or less a presidential form of battle.

However, the BJP’s nationalistic agenda of merging “culture” and “religion” with “nationalism” and seeking electoral success based on vote divisions was effectively countered by the AAP, which focussed exclusively on development issues like water, power, school, mohalla clinics, sewer and free ride scheme for women. Further, AAP also successfully ensured that it does not fall prey to the anti-Hindu/pro-minority image that was successfully used by the BJP in other State elections.

This, in a sense could be read in Kejriwal’s chanting of Hanuman Chalisa or his temple visits. However, more than appeasement, it points to the indispensability of a politics of belongingness, prevalence of a politics of national identity, one that can articulate either violently or in a subtle manner but cannot simply be erased.

This understanding needs to consider a common sense that flows underneath the vox populi of Delhi. Even though it resembles political conservatism, it is couched within a wide variety of day-to-day vocabulary of politics that simultaneously harbours fear for the other and at the same time rejects any kind of politics that rests solely on violent and communal nationalist rant. The success of AAP leaves residue for a new political imaginary that could probably recast Indian politics within an eclectic frame, fusing the narrative of governance and nationalism. It may redefine conservatism via technologies of governance, representing more sections through negotiation between imagined majorities and those making the idea of nation itself more inclusive.

However, it is difficult to talk about the future. Though AAP has made an impressive entry into electoral politics, it is not certain whether this sort of inroads can be repeated in other States with the same agenda and programmes. Besides, it will be difficult for it to move on with these ambiguous and simplistic perspectives, particularly on core structural questions of caste and land among others.

As was argued by SP Shukla, AAP refuses to see the current situation as part of a historical process that started long ago. Its concern is short-term. Its focus is myopic. And it stops short of any radical analysis or measure. But responses amid the Delhi elections are noteworthy. They need to be thought of as signposts of the changing nature of the political discourse in the Indian context.

(Mohit Kumar is an Assistant Professor at Bhagini Nivedita College, University of Delhi; Anish VR is a Phd Research Scholar at the University of Hyderabad)