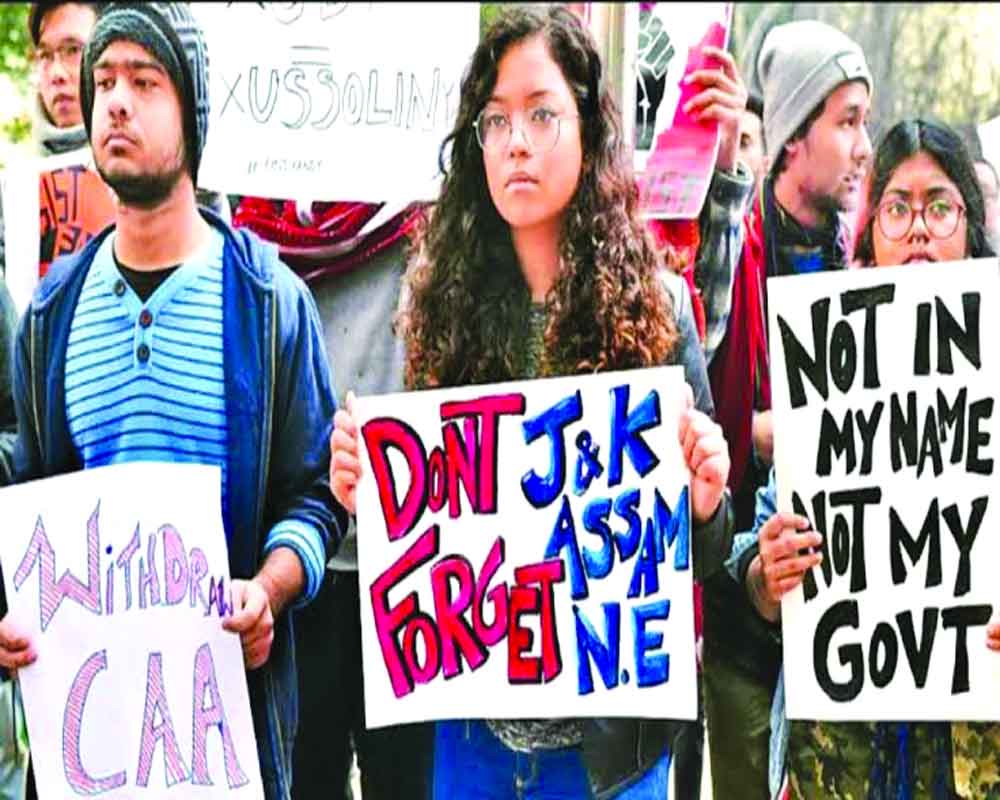 Because of CAA, even the NRC exercise gets debunked. This gives a further jolt to ethnonationalist identities, who take CAA to be a bigger threat than illegal immigration

Do those among the linguistic and religious minorities of Assam, who have failed the test of citizenship in the recently-concluded updation of the National Register of Citizens (NRC), become the soft target of the heightened cry for protection of indigenous identity in Assam and North-east India? With the passage of the Citizenship Amendment Act (CAA), one section of those left out of the NRC now gets an opportunity to be citizens, solely on the basis of religion, while another section remains ignored. Does such a contrived outcome make anyone happy in Assam?

Assam’s Bengali-origin religious minorities, popularly called Miyas or Bhatiyas in Brahmaputra Valley and Bangals in Barak Valley face the biggest threat of proving their credentials after being left out of the NRC. Those excluded will now have to prepare for a complicated legal battle to prove their citizenship through the Foreigners’ Tribunals. These tribunals are supposed to decide the fate of an estimated five lakh presumed illegals and how many would succeed in such a trial is anyone’s guess. The tribunals, governed by the Foreigners’ Act, 1946, place the “onus of proof” on the suspect and not on the prosecution, making it difficult for a “suspect” to get natural justice. As citizenship is considered the most basic right to have or not to have all other rights, the shifting of the “onus of proof” makes it extremely difficult for anyone to prove credentials. Worse is the case when the tribunals at random ex-parte declare too many people foreigners. Many of those people have been put in inhumane detention camps in six places, numbering around a thousand, of which 23 have already died in custody.

The protest against the CAA remains silent on this humanitarian crisis and the ignominy of effacing these unfortunate excluded people from public discourse. With the coming of CAA, a section of these excluded people now wait for some redemption, while another section silently prepares for a long and uncertain legal battle that lies ahead. Both the sections, however, face another cultural test of proving their antecedents, which could be satisfied only by accepting the dominant language of the State.

Any democratic movement, such as one currently against the CAA, should have taken into account the plight of these people. But they are looked upon as “foreigners” and “illegal immigrants” whose very presence threatens indigenous language and culture. This is how, much of the protesters favour the NRC to weed them out while they reject the CAA. The CAA bears the signature of sheltering “persecuted religious minorities from three neighbouring countries” and thereby changes the rules of the game with which the NRC was carried out. Because of CAA, even the NRC exercise gets automatically debunked. This gives a further jolt to ethnonationalist identities, who take CAA to be a bigger threat than illegal immigration. The layered and nuanced ideas of citizenship as indigenity stand in contrast to granting citizenship to a section of illegal immigrants on the basis of religion. In effect, old faultlines between indigenous ethnic identity and non-indigenous Indian citizens is reinvoked, turning both the CAA and NRC exercise as detrimental to the language, land and culture of ethnic groups. The question is no longer just saving the indigenous habitats of North-east from illegals but it is also a question of “protective discrimination” for the native and the indigenous from non-indigenous Indian citizens. The land policy of the Government of Assam stated clearly why non-indigenous citizens, being settlers cannot buy/own land.

CAA’s exclusion of the Sixth Schedule tribal States from its ambit created a sense of heightened anxiety in Assam and Tripura for being forced to accept those non-indigenous settler immigrants who would be legalised by the CAA. The possible demographic impact and squeeze on language and culture has reinvoked the fear of getting outnumbered. To rein in such a majoritarian impact of the CAA, there are rising demands for introduction of an Inner Line Permit (ILP) system to physically restrict the movement of other  citizens from outside the State.

In a sense, the CAA meets its toughest resistance from such demands of protective discrimination, as it would further alienate the North-east and its people from the mainstream while ensuring their specific rights. Certainly this would negatively impact economic transaction between the North-east and the rest of India and as a corollary break the idea of seamless economic connections with South and South-east Asian countries, as mooted in the Act East Policy of the Centre.

The governance structure of States in the North-east seemingly is not able to face the implosion of sentiments of ethnic and indigenous groups against the CAA and is also unable to contain the fight against the CAA from relapsing into a full fight against the State and the Government. In an Assam-specific way, a slew of measures like amendment to Article 345, 347 and Article 371B to ensure protection of Ahomia as the State language, culture and identity of the people of Assam has been announced by the State Government to neutralise the anti-CAA protests, but social organisations are not convinced of some measures. They argued that if protective measures had preceded CAA, probably it would not have become such a big protest. The shift of focus in the protest from illegal immigrants to strict measures of protection in Assam and Tripura not only created an alternative political discourse of pre-colonial identity assertion and securing of homelands, but it also harmed those who are supposed to benefit from the CAA, notably the Hindu Bengalis. This change into community affirmation rigidly redraws several boundaries, creates a reverse discrimination towards the beneficiaries of the CAA by uniting everyone else.

The announcement of the National Population Register (NPR) at the national level and much of the resistance to the idea that the NPR and National Register of Indian Citizens (NRIC) are the same arose from transmission of Northeastern reactions to the mainland due to greater visibility of protests in the North-east. After the first wave of protests in the North-east, major Indian cities witnessed a stir against the NPR and NRC exercise that are supposed to supplement CAA by separating the infiltrators from persecuted religious minorities. This inherently differentiating tenor of CAA made a nationwide resurgence of demands for a caste census and rejection of any test of citizenship. The dystopic Assam experience occupied much of the national imagination in calling for a boycott of NPR cum NRIC, especially when CAA makes it clearer for whom the bell will toll.

The fear and anxiety surrounding the new entries relating to father’s birthplace and date of birth in the NPR format and dropping of all Muslim festivals from the list of holidays, as suggested in the NPR, create a bigger sense of discrimination. The sense of protection generated out of fear of being outnumbered in the North-east feeds this fear of discrimination at the national level and vice-versa. Although fear transmits easily, yet the cause and purpose of anti-CAA protests also remain different between North-east and the rest of India. The question of defending the Constitution, an essential part of the pan-Indian discourse of resistance to CAA finds very little speck in the North-east where the it is more about protection from the non-indigenous and the illegals. The convergences and the divergences are both ingenuous as they promise to set up new equations and alliances between social identities. The beauty of such disjointed resistance to the CAA is that it gives rise to a new form of federal relations. How the Government manages it will decide the future course of politics in India.

It is also worth nothing the debates centering around some of the States opposing implementation of the CAA and their moves by filing cases against it in the Supreme Court. Interestingly enough, Arunachal Pradesh, being a State with ILP is exempted from CAA, yet it has decided to file a petition in the apex court opposing any procedure to grant citizenship to Chakma and Hajong refugees. It is also widely contended that the CAA might lead to exodus of tribal refugees from CAA-exempted tribal States of the North-east to Tripura and Assam, where they can apply for citizenship through CAA. The case of Bengali Hindu refugees in Bodoland Territorial Council of Assam is even more dismal, as they have to move out of areas falling under the council and resettle in a neighbouring district within Assam to become eligible to apply under CAA. While these anomalies continue, the lived reality of “illegal immigrants” continues to be difficult, as they try to survive through double-edged laws granting benefit and withholding them at the same time.

(The writer is Associate Professor at North Eastern Hill University, Shillong and a human rights activist)