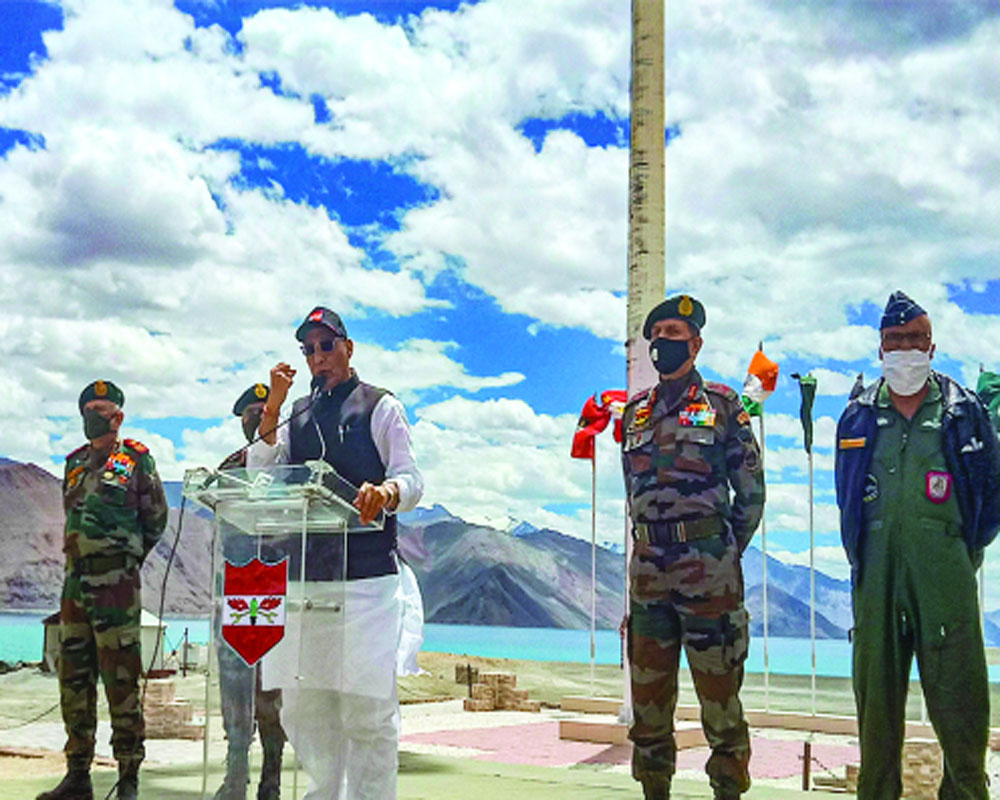 India has accepted a China-dictated disengagement model: The creation of buffer zones while withdrawing from its own territory and forfeiting legitimate rights of patrolling

Twelve weeks after the intrusions in Ladakh, Lt Gen YK Joshi, in charge of managing the Line of Control (LoC) and the Line of Actual Control (LAC) in Jammu & Kashmir and Ladakh, said, “We shall continue all efforts to restore the status quo ante along the LAC,” confirming the doubts expressed by Defence Minister Rajnath Singh about a positive outcome on disengagement. After three rounds of dialogue of the working mechanism (fourth round is due on Friday) and four rounds of talks between the military commanders (next round is expected this week), the disengagement and de-escalation process (DDP) remains stalled with a disadvantaged disengagement at Galwan — LAC shifted one km on the Indian side — and partial disengagement at Hotsprings, Gogra region and Finger 4. The People’s Liberation Army (PLA) is stubbornly resisting disengagement at Depsang, where it has intruded 18 km on the Indian side of the LAC.

At most places, the PLA has done a Doklam: Dug down and constructed fortifications. The Chinese have unilaterally altered status quo by shifting the LAC further west, attempting to surpass their 1960 claim line and cushioning the G-219 strategic highway from Kashgar to Lhasa through the Aksai Chin. The ball has been in India’s court since April 19, when intelligence reports about PLA intrusions were ignored. By default, India has accepted a China-dictated DDP model: The creation of buffer zones while India has been withdrawing from its own territory and forfeiting legitimate rights of patrolling. A July 22 Stratfor report by Sim Tack notes that 26 new Chinese encampments, 22 new support bases and two new helipads have mushroomed behind the intrusion points on the Chinese side of the LAC.

In its negotiating strategy, India has put the cart before the horse: Allowing military commanders to determine the DDP whereas a high-level political engagement should have established the parameters for withdrawal, factoring in lessons from earlier intrusions, especially front-loading restoration of status quo ante, followed by the Chinese golden rule of “those who advance first must withdraw first” and “mutual and equal security.” Instead, India accepted buffer zones and attendant restrictions, which could transform LAC into LoC, given in order to match the PLA’s deployment of four to five combined arms brigades, India had to post three additional divisions ahead of its main defences to block the intrusion points.

Interestingly, while India has stressed on complete disengagement along the LAC and full restoration of peace and tranquility for the smooth and overall development of bilateral relations, China has consistently avoided using the LAC (instead uses border areas) and is focussing on complete withdrawal from “friction points.” Restoration of status quo has been replaced with complete disengagement and full restoration of peace and tranquility. Even the blind should see this.

Till date, the Government has not clarified the actual ground situation, except Gen Joshi’s comforting but embarrassing statement about the reinstatement of status quo. Compounding the problem is the Government peddling a fake narrative that the PLA has not encroached across the LAC and during the Galwan clash.  According to Lt Gen SL Narasimhan from the National Security Advisory Board (NSAB), Indian soldiers may have crossed the Chinese side of the LAC in the melee.

Prime Minister Narendra Modi and Rajnath Singh can keep delivering veiled threats of giving a befitting reply when the intention is clearly to de-escalate. Under the muscular Modi Government, two sets of responses have evolved against the adversary’s depredations — a Balakot airstrike  against Pakistan and a banners-battle of containment against China.

Emboldened by India’s familiar weakness to meet coercion with counter-coercion, China has begun bullying Bhutan. Though Thimphu has maintained silence over Ladakh, it has rejected Chinese claims to territory in eastern Bhutan. Until now, Bhutan has been guided by India on its 24 rounds of border talks with China. But if India fails to vacate Chinese aggression, Bhutan may slip out of its control and treaty obligations in its own national interest. Popular sentiment in Bhutan is not to mess with China. K5 — King  Jigme Khesar Namgyel Wangchuck, unlike K4 (Jigme Singye Wangchuck, his father) may not have put all his eggs in India’s basket.

India’s military options are circumscribed by the three Nos: No escalation, no shooting, no war despite threats of a befitting reply. As always, China is the satisfied power after having annexed approximately 60 sq km of the territory. It has already imposed heavy costs on India by sucking in three additional divisions towards the LAC. New Delhi must contain and push back intrusions through dialogue, secure the strategic highway to Daulat Beg Oldie, seize Galwan heights and defend airfield at DBO.

An infantry brigade backed by T90 tanks and light and heavy artillery has reportedly ring-fenced DBO. Indian forces are currently deployed 50 to 60 km ahead of its main defences in the high mountainous terrain defending Leh. Any future conflict will be in the 15,000 feet high plains area from Galwan to Depsang.

This is the first time that 30,000 troops might have to weather it out in a harsh winter, in hostile habitat. Previously, there were not more than 2,000-3,000 troops near the LAC, that, too, mainly ITBP. Further, there have been no joint exercises between the Indian Air Force (IAF) and the Army along the LAC due to restrictions of border protocols.

India’s best bet is leveraging its partnership with the US against China — Washington is in an unprecedented Cold War with Beijing — both militarily and economically. Defence Secretary Mark Esper and Secretary of State Mike Pompeo have supported India in its resistance to Chinese bullying and aggression. Maritime solidarity has been demonstrated through Malabar Naval  exercises, feelers have been thrown about upgrading the QUAD in the Indo-Pacific region and the building of a coalition of democracies to contain China.

But India’s Foreign Minister, S Jaishankar, is loud-thinking: About incongruence of non-alignment, the need to make choices and taking risks. Still, a reset in India-China relations must wait till the outcome of DDP and restoration of status quo. Till then, India holding out the threats to decouple from China economically will neither be easy nor bereft of cost, so intricately entwined are the two economies and supply chains. Although New Delhi will wait for Beijing to undo the intrusions, some preliminary punitive steps have been taken and signals for more have been sent out.

Punditry about China’s motives in shedding fig leaf of “hide your strength; bide your time” abounds: Varying from aggression being the diversionary strategy for mishandling of the COVID-19 pandemic to realising Chinese President Xi Jinping’s Chinese dream of reasserting suzerainty issues that are not India-specific but part of reclaiming the territory lost through historical injustices and unequal treaties. Putting the genie back into the bottle will not be easy for China. Equally, an altered status quo along the LAC will be unacceptable to India. As Rajnath Singh said in Leh on July 17: “India will respond with force to attempts to hurt India’s self-esteem.”