Strength of an institution

Strength of an institution 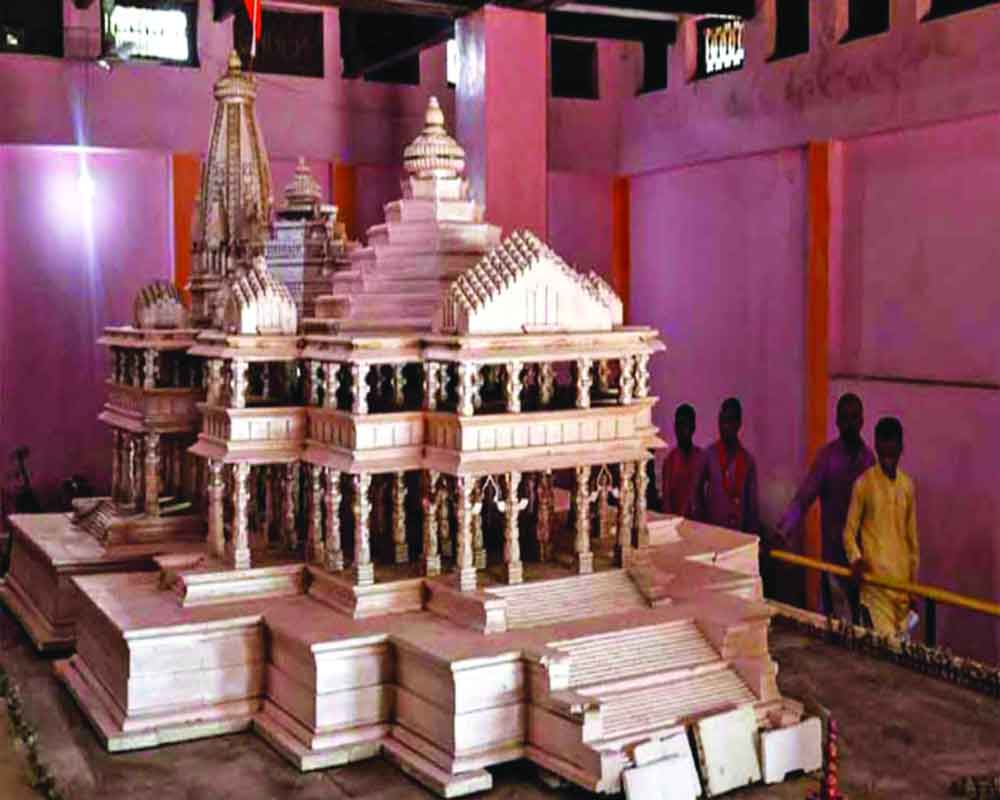 Finally, after many centuries, the decks have been cleared for the construction of the Ram temple at Ayodhya with the Union Government setting up the Shri Ram Janmabhoomi Tirth Kshetra trust to oversee the construction of the temple and to manage its affairs. Prime Minister Narendra Modi told Parliament that the constitution of the trust — which was a historic step — was in line with the Supreme Court’s verdict.

While handing over the disputed land to the Hindus, the apex court directed the Government to formulate a scheme within a period of three months from the date of its judgment. It said the scheme should envisage the setting up of a trust with a board of trustees or any other appropriate body. Further, the scheme should make necessary provisions with regard to the functioning of the trust, including management, power of trustees and the construction of the temple.

The possession of the inner and outer courtyards should be handed over to the trust and the Union Government would be at liberty to make suitable provisions with respect to the rest of the acquired land. Further, the court directed that a suitable piece of land measuring five acres be handed over to the Sunni Central Waqf Board. This land could be allotted “at a suitable, prominent place in Ayodhya.” It said the Union Government and the State Government should act in consultation with each other to effectuate the above allotment within the stipulated period. The Government announced all these measures last week, as was directed by the top court.

The creation of the trust for the construction of the Ram temple is also in a sense the fulfilment of the solemn promise given by the then Government in September 1994 when PV Narasimha Rao was the Prime Minister, that if it was found that a Hindu temple existed under the Babri Masjid, the Government would return the acquired land to the Hindus.

Subsequently, almost a decade later, the Archaeological Survey of India (ASI), which was given the task of excavation to ascertain the veracity of the claims and counter claims, came up with evidence of pillars and other artefacts associated with a Hindu temple below the demolished masjid.

The assurance given by the Union Government in this regard was unambiguous and completely devoid of any “ifs and buts.” Given the sensitivity of the issue and the fact that this was a matter of faith for the Hindus — who believe that the disputed piece of land is the birth place of Ram — the Government’s affidavit was a big risk. It meant that the Hindus would need to produce proof or hope that it existed below the demolished structure, which would lend credence to their belief regarding the janmasthan of Lord Ram.

On the face of it, this was wholly unreasonable because the Hindu faith would be tested on the anvil of scientific evidence and if they failed the test, they would lose their claim to the birthplace of Ram. Was the Union Government right in binding the Hindus to such a scenario? It also seemed as if the Government was giving the commitment on behalf of the almost one-billion strong Hindu community.

Yet the Hindus went along with this proposition and it is difficult to find a parallel to this in any part of the world. Although the outcome was a toss-up and could have hurt the belief of the Hindus regarding Lord Ram’s birthplace, which had prevailed over the millennia, the Hindu majority took this in its stride. It also waited patiently for the higher judiciary to give its verdict on whether their faith regarding the janmasthan was justified. If ever one wanted proof of the secular, democratic credentials of the Hindu community, this was it. Its silence over the Narasimha Rao Government’s affidavit and the patient wait for the judicial verdict on a matter of faith showed that for the majority, the Constitution was above everything else.

Eventually, the Hindu-majority found that neither of the faiths — in Lord Ram’s birthplace and in the fairness of the Supreme Court — were misplaced. The court held that “the faith and belief of Hindus since prior to the construction of the mosque and subsequent thereto has always been that janmasthan of Lord Ram is the place where Babri Mosque has been constructed.” It said that this faith and belief had been proved “by documentary and oral evidence.”

Similarly, the quiet acceptance of the Supreme Court judgment by Muslims is also a pointer to the resilience of our democratic system and the general sentiment across communities and across the land regarding the court’s supremacy when it comes to interpreting the Constitution and the laws and

in settling such vexatious disputes.

This is indicative of the robustness of our Constitutional way of life. The peaceful resolution of this centuries-old conflict within the framework of our Constitution is a sterling example of our pristine democratic traditions and of how evolved we are as a democracy. This  needs to be celebrated.

The Prime Minister alluded to this when he said recently that following the Ram Janmabhoomi judgment, the people of India had displayed remarkable faith in democratic processes and procedures. The grand temple, when built, will symbolise not only India’s civilisational glory but also its commitment to democracy and harmony.

Let there be no confusion. One may not find another example of this kind elsewhere. It is, therefore, pathetic to listen to some malcontents, whose political ambitions have been thwarted by the people of India in the Lok Sabha election held last year, who are constantly trying to run down our democracy because the people have rejected them. It is even more disgusting to hear lectures on democracy in the Western media, which has never shown the spine to talk about the plight of religious minorities in 60 Islamic nations.